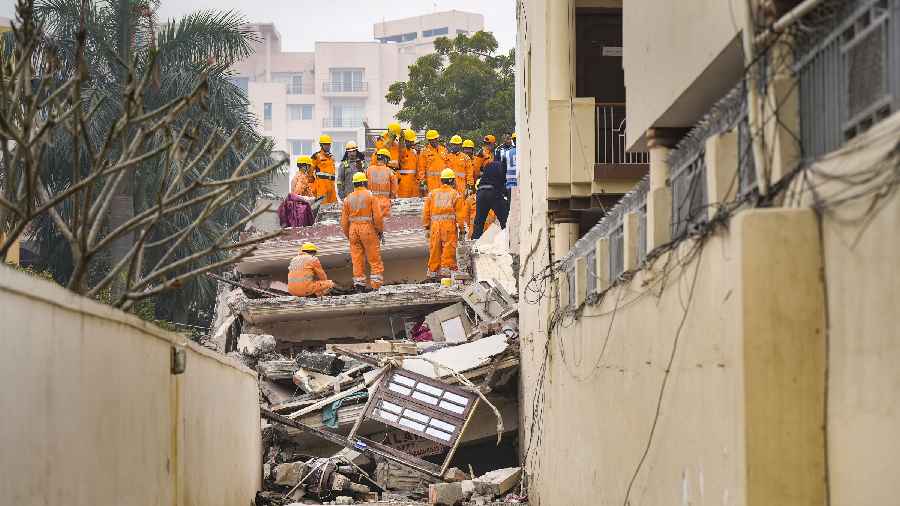 Rescue operation underway after the collapse of a four-storey residential building in the Hazratganj area, in Lucknow
PTI picture
PTI   |   Lucknow   |   Published 25.01.23, 03:11 PM

Rescue personnel drawn from various agencies have been working round the clock since a multi-storey building collapsed in Lucknow Tuesday evening and the hope of pulling out anyone alive from the debris is diminishing by the minute.

Two women -- the mother and wife of a Samajwadi Party spokesperson -- have been confirmed dead and two more people are still feared trapped under the debris. More than a dozen people have been rescued so far and admitted to hospitals.

The five-storey Alaya Apartments in the Hazratganj area in the national capital collapsed Tuesday evening.

Officiating Director General of Police (DGP) D S Chauhan visited the spot and briefed the media about the rescue operation.

Rescue personnel are taking outmost precaution and avoiding the use of heavy machinery to avoid loss of life.

The roads leading to the building which were closed on Tuesday evening was reopened but no one was allowed to reach the site.

The hope of taking out anyone from the debris alive is diminishing by the minute, an SDRF personnel said.

The deceased were identified as Uzma Haider, 30, and Begum Haider, 87, the wife and mother of Samajwadi Party spokesperson Abbas Haider. They were pulled out of the debris and died later.

The building - Alaya Apartments - was constructed on the land of Samajwadi Party leader Shahid Manzoor, who had given it to a builder.

SP MLAs Arman Khan and Ravidas Mehrotra visited the spot and told the media that strict action should be taken against the guilty.

"Digging was going on in the basement. A probe should be initiated and strict action should be taken against the guilty. It's a very serious matter and those who played with lives of people should face action," SP MLA Mehrotra said.

On being pointed out that the land on which the apartment was constructed belonged to his party leader, Mehrotra said, "This is not a matter of party and strict action should be taken." Chief Minister Yogi Adityanath ordered setting up a three-member committee to probe the incident and submit a report within a week.

The Lucknow administration, meanwhile, ordered lodging of a case against the builder and owners of the multi-storey building in the Hazratganj area, a government statement issued here said on Wednesday.