Advertisement
Home / India / Report on Rafale not worth its paper: Rahul

Congress chief asks why the dissent note is not present 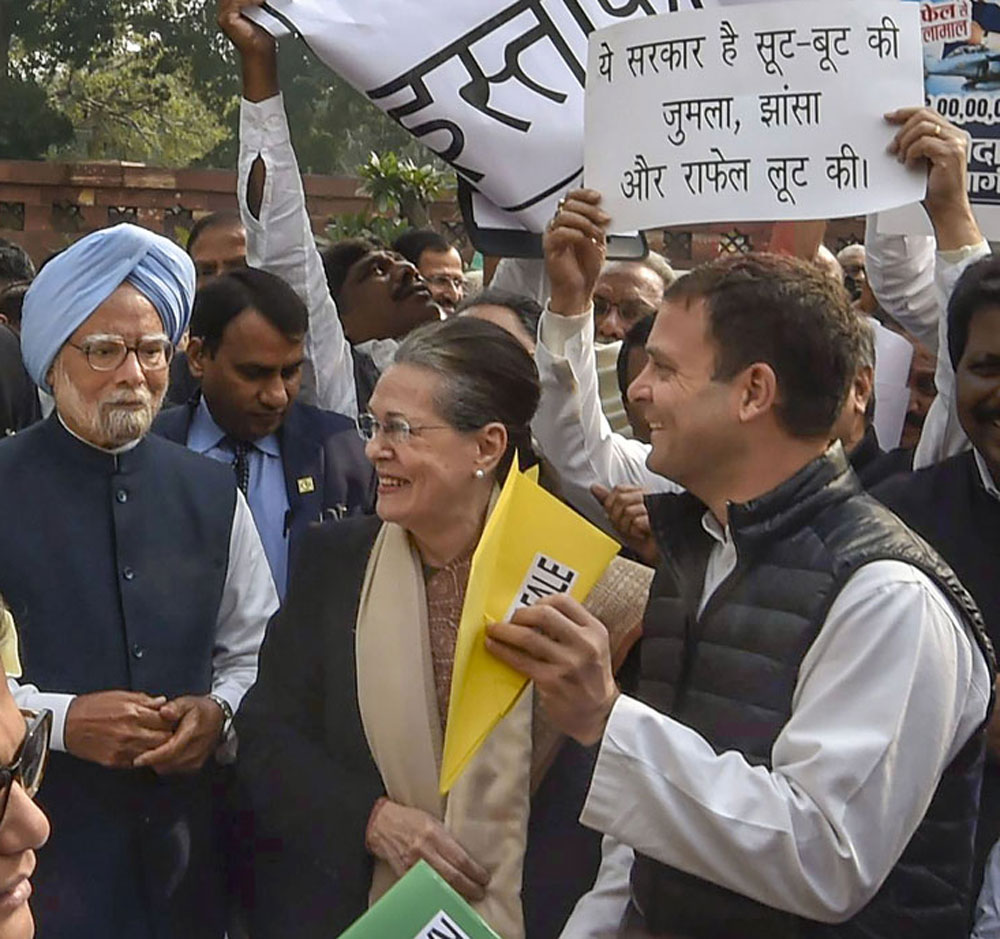 Manmohan Singh, Sonia Gandhi and Rahul Gandhi at a protest over the Rafale deal outside Parliament on Wednesday.
(PTI)
Our Special Correspondent   |   New Delhi   |   Published 13.02.19, 09:47 PM

Congress president Rahul Gandhi on Wednesday dismissed the Comptroller and Auditor General of India’s report on the Rafale deal as “not even worth the piece of paper it is written on” as it does not reflect on critical information about the negotiations and pricing details.

Addressing a media conference, Rahul said: “Why is this document (dissent note submitted by three members of the Indian negotiating team) not there in the CAG report? You know why these officials put their view in black and white? Because they know corruption has happened and they don’t want to go to jail after the investigation.”

Asserting that the “new Rafale deal was a con and a robbery”, the Congress chief said: “The dissent note demolishes the two pillars on which the government arguments rest — that the price is cheaper and the delivery schedule is faster. It clearly says the price (in the NDA deal) was 55.6 per cent higher (than the benchmark price) and the delivery schedule was better in the UPA deal. It is clear the only reason why the deal was changed is that Rs 30,000 crore had to be given to Anil Ambani.”

Rahul added: “The dissent note says: ‘Considering the current backlog of 83 aircraft, Rafale aircraft for Dassault Aviation and its current production rate of 8 aircraft per year, the delivery schedule is being offered by the French side in the IGAS (the new deal) highly optimistic.’

“No. 2 — on price again the document of the officers, who are the technical experts, experts on price, say: ‘The final price offered by the French government, (which is escalation-based) is 55.6 per cent above the bench mark (which is the performed and fixed price). Considering the future escalations till the time of delivery, the gap in the bench mark and the final price would further increase.’”

Rahul argued that even if the CAG report was accepted on pricing, “though I don’t buy this… this nails the lies of defence minister Nirmala Sitharaman and finance minister Arun Jaitley, who had said on the floor of Parliament that the price was 9 to 20 per cent cheaper.”

He alleged that the full facts had not been made available to the Supreme Court.

Later in a statement, Congress communications chief Randeep Surjewala said: “The CAG report is a mere eyewash as it even fails to mention the price of aircraft. Even the manufactured figure of 2.86 per cent cheaper by CAG is horribly fake and false. The report records that ‘Performance Guarantee and Warranty’, as offered by Dassault Aviation in the 2007 contract, was equivalent to 10 per cent of the total value of the contract.

“The dissent note dated 01.06.2016 of the INT (Indian negotiating team) that appeared in The Hindu today puts the value of bank guarantee at 574 million euros. The CAG report clearly records that this was a saving for Dassault Aviation. However, this value is not included to determine the total cost of the aircraft.”