Questions on the Rafale deal refuse to go away 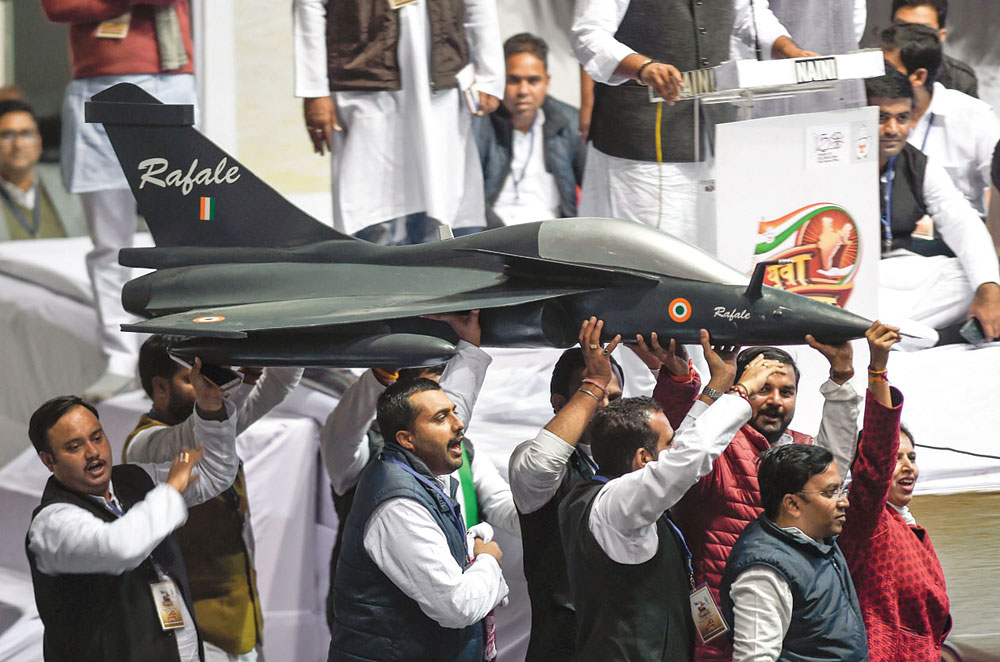 Youth Congress workers holding a model of the Rafale aircraft during the Yuva Kranti Yatra at Talkatora Stadium in New Delhi on January 30
(PTI)
Manini Chatterjee   |   Published 11.02.19, 03:03 AM

Consider this. On February 1, the Anil Ambani-owned Reliance Communications or RCom filed for bankruptcy. For over a year, the company ridden with a debt of over Rs 45,000 crores had been in talks with its many lenders to reach a settlement.

Last May, the National Company Law Tribunal had admitted three insolvency petitions against RCom filed by the Swedish company, Ericsson, for pending dues of Rs 1,150 crores. At that time, RCom moved the National Company Law Appellate Tribunal to stave off bankruptcy proceedings and agreed to pay Ericsson Rs 550 crore as settlement. It failed to do that, resulting in contempt of court petitions against Anil Ambani in the Supreme Court.

Running out of options, the company finally approached the NCLT this month to seek “a resolution” of its debt position — a formal declaration of bankruptcy.

But if that makes you feel sorry for the younger brother of India’s richest man, spare the tears. For the junior Ambani has reason to cheer. Less than a week after his telecom company went bankrupt, another of his companies was showing off its wares. On February 7, Dassault Reliance Aerospace Limited invited a group of journalists to its manufacturing facility at Mihan in Nagpur to display “the first cockpit front section of Falcon 2000 series” produced by the company to be handed over to Dassault Aviation.

The facility, it told the visiting reporters, would be in a position to roll out fully assembled Dassault Falcon 2000 business jets in about three years. If that were to happen, Anil Ambani — who had no experience in the defence sector and yet became Dassault’s chosen partner with a 51 per cent stake in the joint venture — will finally become a very successful businessman indeed.

The February 7 excursion may have gone unnoticed but for a cruel coincidence in timing. The very next day, yet another revelation on the Rafale fighter jet deal created a storm in and outside Parliament. On February 8, The Hindu published a file noting by a former defence secretary in December 2015 that a “parallel negotiation” by the Prime Minister’s Office in the Rafale deal should be avoided since it “undermines our negotiating position seriously”.

The noting was on a letter by the deputy secretary in the ministry who was far more explicit in his misgivings. The letter said that “parallel discussions by the PMO has weakened the negotiating position of [Ministry of Defence] and Indian Negotiating Team” and that “[w]e may advise PMO that any Officers who are not part of the Indian Negotiating Team may refrain from having parallel parleys with the officers of the French government.”

The defence minister, Nirmala Sitharaman, sought to rubbish the report on the grounds that the then defence minister, Manohar Parrikar, had dismissed the criticism of the PMO as an “over reaction” and asked the defence secretary to resolve the issue in consultation with the PM’s principal secretary.

Instead of quelling the controversy, it only confirmed that the PMO had been involved in negotiations which were strictly in the domain of the defence ministry.

For those following the intricacies of the Rafale deal, the hitherto secret letter and the file noting fit into a pattern. It highlighted, once again, the inexplicable personal interest shown by the prime minister in pushing the deal which greatly benefited an otherwise failed businessman called Anil Ambani.

The government keeps rubbishing all charges of wrongdoing by citing the Supreme Court’s “clean chit” that endorsed the Indian Air Force’s urgent need for new fighter jets, upheld the quality of the jets, and accepted the government’s erroneous submission that the Comptroller and Auditor General report on the Rafale deal had been examined by the public accounts committee of Parliament.

Whether or not the apex court recalls its verdict in light of new revelations and in response to the cogently argued review petition filed by Arun Shourie, Yashwant Sinha and Prashant Bhushan that is pending before it, troubling questions on the deal persist. And they principally pertain to Narendra Modi’s unilateralism and the choice of Anil Ambani as the “offsets partner” of Dassault Aviation — the manufacturers of Rafale.

First and foremost, it is still not clear what prompted the prime minister to make a sudden and unilateral announcement during his first visit to France on April 10, 2015 that India would buy 36 Rafale jets in “fly away” condition. The earlier agreement being negotiated by the UPA government was for 126 jets of which 18 would be bought in “fly away” condition and the remaining 108 manufactured by the public sector enterprise, Hindustan Aeronautics Limited.

It bears repeating that no one in the government had any inkling of the Rafale announcement before Modi made it. In fact, at the customary press briefing before a prime minister’s overseas trip, three reporters asked the then foreign secretary, S. Jaishankar, whether there would be any negotiations on Rafale during the visit.

Jaishankar replied: “In terms of Rafale, my understanding is that there are discussions under way between the French company, our Ministry of Defence, the HAL which is involved in this. These are ongoing discussions... We do not mix up leadership level visits with deep details of ongoing defence contracts. That is on a different track. A leadership visit usually looks at big picture issues even in the security field.”

Jaishankar was proved wrong. Ignoring norms that leaders follow, Modi — clearly without consulting anyone in the defence or external affairs ministry — made the announcement which virtually discarded the “ongoing defence contract” and foisted a new one. Once the prime minister had spoken, others had to fall in line. In July 2015, the earlier deal was scrapped. Over the next 17-odd months, the Indian Air Force and the defence ministry began negotiations for the new deal — a fait accompli imposed on them by the prime minister. The then defence minister, Parrikar, was not even part of the prime minister’s delegation when a momentous announcement pertaining to his ministry was made.

The role of Anil Ambani — who went with Modi to Paris — is even more intriguing. At the time, his businesses were already floundering. RCom was in trouble, his foray into the media (Reliance MediaWorks) was ridden with debts, and his Reliance Infra which was to run the Delhi Airport Metro Express for 30 years had pulled out of it because of mounting losses.

But then the junior Ambani decided to enter the defence sector. It is not clear whether his decision was inspired by Modi’s April 10 announcement or the other way around. But what we do know is that on April 24, 2015, just two weeks after the prime minister changed the contours of the Rafale deal and cut out HAL from it, Anil Ambani incorporated Reliance Aerostructure Limited. In July, it applied for land in Mihan SEZ in Nagpur and was allotted the land in August. Although it had no experience in the defence sector, Dassault Aviation chose RAL as its partner to set up the joint venture which would implement the offsets contracts — that is manufacture products in India running into thousands of crores. The Falcon cockpit on display last week was its first offering. Not a single Rafale jet has arrived in India, but Anil Ambani is already prospering from the deal.

Why Dassault Aviation should choose a company owned by someone who has a proven track record of failing in business and owes huge sums to international banks and firms continues to remain a mystery. The only credible explanations have come from France: the former French president, François Hollande, has said that the Indian government proposed the name of the Ambani group and Dassault trade unions have said that the deal with Reliance was a “trade off” for the company to get the contract.

Our own government has failed to throw any light on the subject. But opacity and obfuscation have their limits. Nirmala Sitharaman may dismiss all questions on Rafale as “flogging a dead horse”. What she and her boss do not seem to realize is that dead horses with festering sores can raise a mighty stink...