Advertisement
Home / India / Refusing to give up on their demands, farmers hold first Kisan Sansad session

Refusing to give up on their demands, farmers hold first Kisan Sansad session 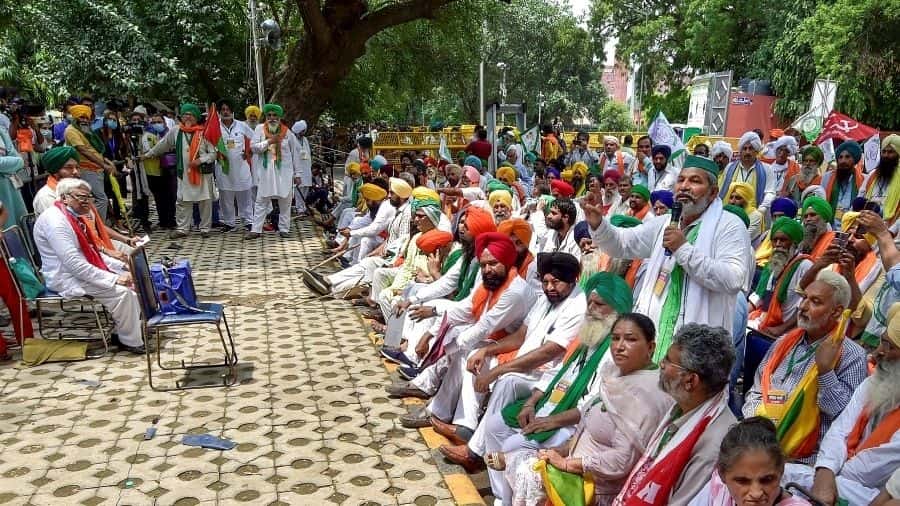 After eight months of harsh winters, unforgiving heat, and rains, farmers protesting against the three contentious agri laws on Thursday reached Jantar Mantar, a few metres away from Parliament where the Monsoon Session is underway, unrelenting in their demand that the legislations be scrapped.

"We have come this far after losing many of our own. We are ready for a long haul. We have come prepared, said Harpal Singh from Bharatiya Kisan Union (Chaduni)," as he wrapped his saffron safa around his head.

The 200 farmers, wearing identification badges and carrying flags of their unions, travelled to Jantar Mantar from their Singhu border protest site in four buses with a police escort.

Even a bus from Pakistan won't be subject to such strict checking The government wants to harass the farmers, Harpal Singh said.

"Two of our buses broke down en route, so police escorted us in DTC buses," he added.

Upon reaching Jantar Mantar, the farmers raised slogans, pumping their fists in the air, and demanded that the government scrap the three laws.

However, they were restricted to a small section of Jantar Mantar with police putting up barricades on both sides.

They organised a Farmers' Parliament and debated the changes in the APMC Act in two sessions, punctuated by a 'langar' (community kitchen), on the first day. The debate also featured women and the elderly.

The Samyukt Kisan Morcha, a joint forum of the farmers' unions protesting against the three laws, said 20 MPs from Kerala visited the farmers' parliament and expressed solidarity with them.

As no politician was allowed to share the stage, the MPs joined in as audience.

Farmer leaders say 200 farmers will come to the protest site everyday till August 13 to discuss the three laws clause by clause.

Several teams of the Delhi Police manned the roads leading to the protest venue, while personnel of the Rapid Action Force, a specialised unit of the Central Reserve Police Force, stood guard at the site, carrying riot shields and batons.

A water cannon and metal-detector gates have been deployed at the site. Two tankers carrying drinking water have also been stationed there.

The Delhi Sikh Gurdwara Management Committee organised a langar for the farmers and media persons and kept an ambulance on standby.

The SKM was asked to give an undertaking that all COVID-19 norms would be followed, but hardly anyone wore a mask or maintained physical distance.

This is the first time since the violence in the national capital during a tractor rally on January 26 that the authorities have granted permission to the protesting farmer unions to hold a demonstration in the city.

Gathering for protests is currently not allowed in the national capital in view of the Covid-19 pandemic, according to an order by the Delhi Disaster Management Authority.

Thousands of farmers from across the country have been agitating at three Delhi border points -- Singhu, Tikri and Ghazipur -- against the three farm laws that they claim will do away with the minimum support price system, leaving them at the mercy of big corporations.

Over 10 rounds of talks with the government, which has been projecting the laws at major agricultural reforms, have failed to break the deadlock between the two sides.