Recounting the ordeal of famed undertrials inside Taloja prison 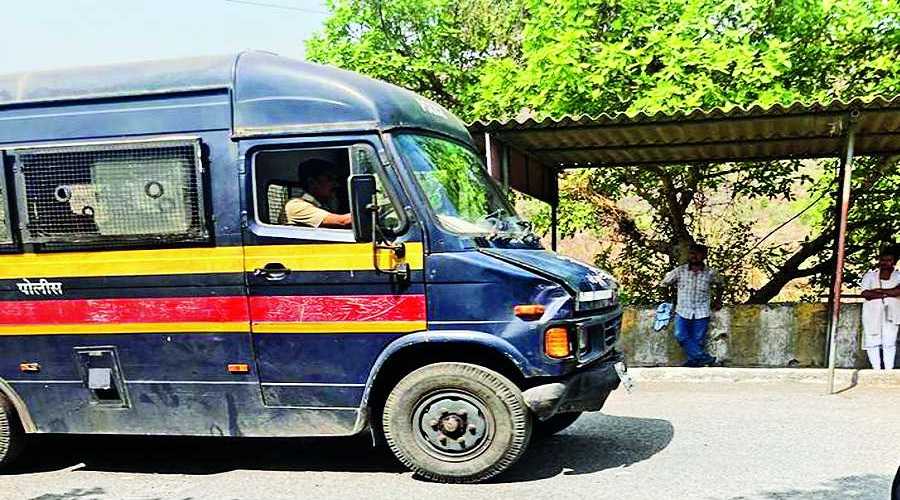 The road outside the jail is paved with little chits, “like snowflakes”.

Sahba Husain, the Delhi-based author, is recalling the indelible markers chiselled into her conscience while she waited last month outside Taloja prison in Navi Mumbai to meet her partner Gautam Navlakha face to face after two years.

On April 14 two years ago, on the 129th birth anniversary of B.R. Ambedkar, the Constitution architect’s granddaughter Rama’s husband and academic Anand Teltumbde, 71, and human rights activist and columnist Navlakha, 69, had surrendered before the National Investigation Agency on the Supreme Court’s orders.

They are among the 16 people arrested for their alleged involvement in the Elgaar Parishad-Maoist links case. One of them, tribal rights activist and Jesuit priest Stan Swamy, died in custody last year while awaiting bail. Two others — Telugu litterateur P. Varavara Rao and Chhattisgarh lawyer Sudha Bharadwaj — are out on bail.

Police investigated the organisers of the Ambedkarite event in Pune on December 31, 2017, for caste clashes the next day at Koregaon village on the banks of the Bhima river that claimed one life. The NIA took over the case in 2020 after the BJP lost power in Maharashtra.

Navlakha had been under house arrest in Delhi since 2018. Since 2020, Teltumbde and Navlakha have been lodged in the high-security “anda” barracks at Taloja prison.

Husain was able to meet Navlakha for the first time on March 28 this year. After his surrender during the pandemic, the prison allowed weekly video calls. Letters, which pass through jail censors, take three weeks to reach their destinations. After the jail resumed normal functioning in October last year when Covid cases fell, the calls were stopped and only physical meetings were allowed.

“I went to Taloja on November 26 with all the documents, including the affidavit in the Supreme Court mentioning that I am the domestic partner and pairokar (litigant’s representative). I was made to wait from 9am to 5pm in the heat outside,” Husain told The Telegraph during an interview at her home on Wednesday.

“I told them I am 70 years old and have come all the way from Delhi but they wouldn’t relent and said that only spouses or close blood relations are allowed. We are not married. Finally, after verification, they gave me a visitor’s token for 3pm the next day. After making me wait till 5.15pm (the second day), they said they would not allow me.”

Husain had to return to Delhi and later moved court to be able to meet Navlakha. The court allowed her to meet him once the NIA and Delhi police had verified her credentials. A fresh rise in Covid cases came in the way.

Husain said: “When we met, we were separated by two glass barriers that have steel rods in between. We talked over an intercom. Ten prisoners talk to their families simultaneously in the room, so there are babies crying and so on. It is a half-hour slot. The connection is not clear. After 20 minutes the guards start banging the grille saying time is up.

“Gautam got very angry, saying she (Husain) had come for the first time all the way from Delhi. We got five minutes more. These conditions seem to be deliberate, maybe to discourage families from coming there…. I just trust, I believe he is strong and has an unflagging spirit.”

Husain found solidarity and resilience among the kin of prisoners during the hours spent waiting outside the jail.

“It is inhospitable outside the jail. There is hardly any shade and several families have only an open shed to wait under. There is one tap out of the ground for water, and rickety sheds that are used as bathrooms,” she said.

“The jail van that drives prisoners to courts or hospitals has little holes in the meshed windows. Prisoners drop (through these holes) chits of paper that simply have a small message, the names (of the prisoner and the relative to whom the message is to be delivered) and a phone number (of the relative). Relatives waiting outside rush and collect these slips and convey messages about court or hospital dates to the numbers written on them.

“The families told me that they do so in the hope that when their (jailed) relative throws a note, somebody will tell them so they can have a glimpse of the relative in court or hospital. This is how starved we are of information. The road outside the jail is littered with these little chits like snowflakes.”

Husain explained: “In the barracks where they (Navlakha and Teltumbde) were kept previously, he could stay out of his cell for eight hours a day, walk, do yoga, and so on. Now in the ‘anda’ circle he can’t see the sky or sunlight. They can walk along a narrow concrete corridor for half an hour a day and even for that, for every little thing, we have to approach the court.”

Navlakha and the other accused have had to approach the court for everyday needs like chairs, spectacles, medical treatment or books and plead with jail staff for mosquito nets.

Bombay High Court pulled up jail authorities for denying Navlakha books by P.G. Wodehouse. Jail officials had claimed it was a “security risk”.

Previously, Father Stan, who had Parkinson’s disease, had to move court for a straw and sipper. Little has changed even after senior Congress leader P. Chidambaram slammed the Maharashtra government, which his party is part of, on Twitter last year asking if officials were “so bereft of human compassion”.

Husain now plans to fly to Mumbai once a month to meet Navlakha. “I try to stop thinking that both of us are around 70. I must try to be there when he is out, and must remain mentally, physically and emotionally fit…. Even Tihar allows calls twice a week. It is ridiculous that we are even talking about which jail is better when all of them are innocent, and have to face all this even before going to trial.”

Navlakha keeps his cheer by making music with other inmates using their buckets and walls as percussion instruments. Husain had sent him lyrics of Bollywood classics they wanted to sing.

Teltumbde taught at the Goa Institute of Management in Panaji before his surrender. While he was in prison, his brother Milind — an alleged Maoist — was killed in a gun battle with the police last November in Maharashtra’s Gadchiroli district.

The high court finally permitted Teltumbde to visit his bereaved mother after more than three months, but his failing health prevented him doing so.

His wife Rama Teltumbde, 66, told this newspaper over the phone: “We have moved a petition saying he be given a cot, as the doctors say that any jerk while getting up can induce paralysis or put him in a coma. He has had spondylitis for 40 years. Still no cot has been given.

“If anything hurts more than the physical pain, it is the humiliation we have to face. All his writings are public and no one objected to them. He did not go and make speeches anywhere, yet at this age we are made to suffer like this, waiting for days for medical treatment.

“His retirement benefits include treatment in private hospitals but jail rules force him to go to a crowded government hospital where he does not get the geriatric care he needs.”

Rama added: “He came up from a poor family the hard way, and educated himself like Babasaheb Ambedkar had advocated. He reached high positions with this hard work and education, working 17-18 hours a day. Sometimes I feel that maybe this is a way to humiliate Babasaheb Ambedkar’s family, to show us in a bad light. I feel sad. This is our age to spend time with our daughters.”

Her plight is a little better than Husain’s. As Rama lives in Mumbai, she gets to meet her husband every week.