RBI tosses live grenade: Not our job to prop up rupee

Markets went into a tailspin and pundits expressed outrage after the Reserve Bank of India’s policymakers stunned the Street on Friday by deciding not to raise the policy interest rate.

RBI governor Urjit Patel, too, delivered a brutal message to the financial markets: it wasn’t his job to prop up the floundering rupee.

The rupee sank below 74 against the dollar and the Sensex tumbled 800 points as a widely anticipated 25-basis-point hike in the repo rate – which is currently ruling at 6.50 per cent -- did not come through.

The central bank had made two back-to-back 25-basis-point hikes on June 6 and August 1 after the bi-monthly reviews of the monetary policy.

The six-member monetary policy committee (MPC) voted 5-1 to hold the repo rate at 6.50 per cent and shifted its stance to “calibrated tightening” from a neutral stance earlier. What this means is that the RBI will raise interest rates if and when the situation warrants.

Patel said the RBI would stick to its narrow legislative mandate of managing retail inflation which must at all times stay within the range of 2 and 6 per cent, with the central bank’s strong preference for the mid-point of 4 per cent.

“Today’s stance of calibrated tightening essentially means that in this rate cycle, a rate cut is off the table, and that we are not bound to increase rates at every meeting,” governor Patel told a media conference. “As new data comes in, we will look into changing our policies accordingly.”

That is not the sort of message that the currency, stock and money markets were waiting to hear. The rupee tumbled to 74.23 against the dollar immediately after the policy announcement before clawing back a little to close at 73.77.

“This is a risky move by the RBI since the market was positioned for a rate hike, purely as a rupee defence,” said Abheek Barua, chief economist at HDFC Bank. “A narrow focus on inflation targets is perhaps not desirable in the middle of a financial crisis.”

Investors had taken trading positions in the stock market on the assumption that the RBI would be in lock-step with other central bankers who have raised rates to attract dollar inflows. An avalanche of selling clobbered blue-chip stocks and left investors with big losses on their books as their trading plays unravelled.

Foreign investors have been stampeding out of emerging markets where returns have shrivelled at a time when the US treasury bonds have turned attractive with the 10-year yield climbing to 3.2 per cent, its highest level since 2011. 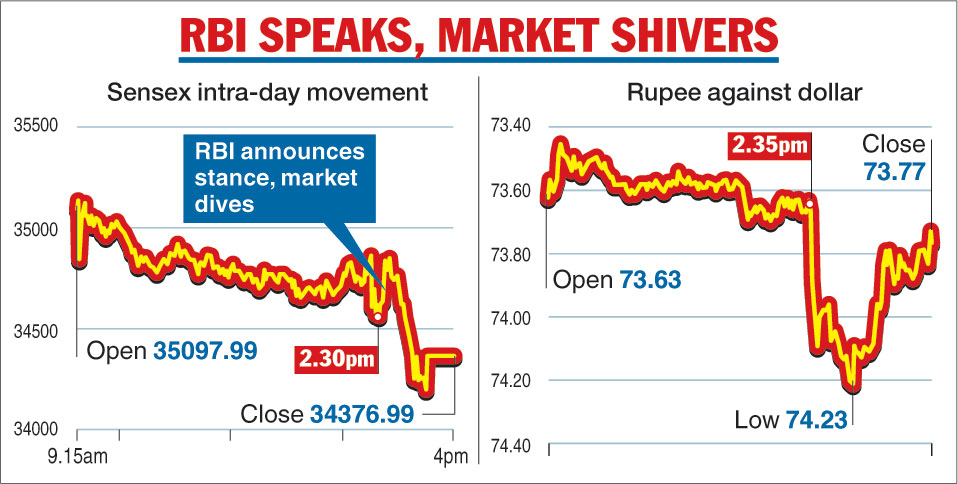