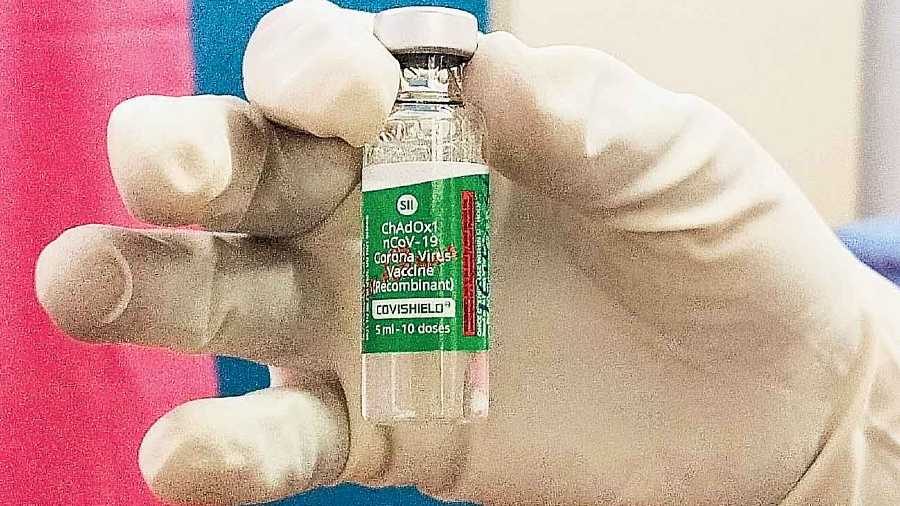 A vaccine policy adviser said India had administered over 868 million doses of Covishield but documented only “a few” cases of VITT, the extremely rare incidence establishing the benefits of the vaccine over the risk.
File picture
G.S. Mudur   |   New Delhi   |   Published 19.10.21, 01:54 AM

A private hospital has confirmed the incidence of a rare but potentially life-threatening, vaccine-induced blood clotting disorder among some Covishield recipients in India through what doctors have described as a “gold-standard” confirmatory test.

The findings corroborate observations from other countries that vaccine-induced thrombosis and thrombocytopenia (VITT) is an extremely rare adverse event, but underline the need for national guidelines to raise awareness on diagnosis and treatment, the doctors said.

Doctors at the Sir Ganga Ram Hospital, New Delhi, diagnosed VITT through an initial test that detects antibodies against a substance called platelet factor 4 (PF4), and then a confirmatory test that observes how normal platelets respond to the patient’s serum.

The first patient that the SGRH doctors diagnosed as suffering from VITT was an 18-year-old boy brought to the Army Hospital, New Delhi, from Mathura in June, 17 days after he had received his first dose of Covishield. The boy, who had a persistent headache and recurrent vomiting, died in hospital.

Doctors believe the boy died because of a late transfer to Delhi after seven days in hospital.

Since June, the SGRH haematology department — which has set up India’s first lab to provide the confirmatory test for VITT — has received 14 additional samples among which six have tested positive for VITT, one from Delhi and five from Kerala.

All six patients have survived after appropriate treatment.

A vaccine policy adviser said India had administered over 868 million doses of Covishield but documented only “a few” cases of VITT, the extremely rare incidence establishing the benefits of the vaccine over the risk.

The World Health Organisation had in April this year flagged reports of thrombosis (formation of blood clots in blood vessels) and thrombocytopenia (low platelet counts) as a rare adverse event following vaccination with Vazeria and Covishield, the AstraZeneca-Oxford vaccines produced by AstraZeneca and the Serum Institute of India, respectively.

Doctors said the incidence of VITT in other countries suggested it occurred in one in 100,000 to one in 127,000 vaccine doses, making it extremely rare. But professional medical organisations in Canada, Germany and the UK have issued diagnostic and treatment guidelines.

“Awareness is the key tool that will expedite diagnosis, guide treatment, and help save patients,” said Jyoti Kotwal, chair of the haematology department at SGRH.

“But we’ve got six samples from Kerala and very few from north India. We need more awareness in medical circles and among vaccine recipients.”

Kotwal added: “Why are we getting more from Kerala? Possibly because of greater awareness among medical professionals there. We need more awareness elsewhere too.”

A senior medical adviser to the vaccination campaign told The Telegraph that thrombosis along with low platelet counts and a raised value of a blood parameter called d-dimer are sufficient for a reliable diagnosis of VITT.

But, Kotwal said, this triad — thrombosis, low platelet count, and raised d-dimer — is at best only “presumptive diagnosis and not confirmed diagnosis”.

While doctors may start treatment on the basis of a presumptive diagnosis, Kotwal said, they need a confirmed diagnosis to continue with appropriate treatment and for the epidemiological purpose of determining the incidence of VITT in the population.

“Many western countries have referral labs doing the gold-standard platelet aggregation test to confirm all suspected cases of VITT and give the correct incidence of this adverse event,” she told this newspaper. “We now have such a lab in our hospital.”

The standard treatment for VITT involves the use of an intravenous immunoglobulin concentrate that blocks the antibodies against PF4, blood thinners to treat clots and prevent new clots, and other lines of therapy.

“The gold standard confirmatory diagnosis will guide appropriate treatment, especially in early cases that have thrombocytopenia with increased d-dimer but have not yet developed a clot that can be picked up by imaging,” Kotwal said.

Senior health officials had asserted earlier this year that India had a robust mechanism for tracking adverse events following immunisation (AEFI), and that analyses of serious AEFIs had established that the benefits of vaccines far outweighed any extremely rare risks.

Some doctors and patients’ rights advocates had earlier this year urged the Union health ministry to thoroughly investigate all cases of thrombosis and thrombocytopenia, expressing concern that not all reported cases were being adequately investigated.