Rap on Jagan for bid to ‘overawe judiciary’ 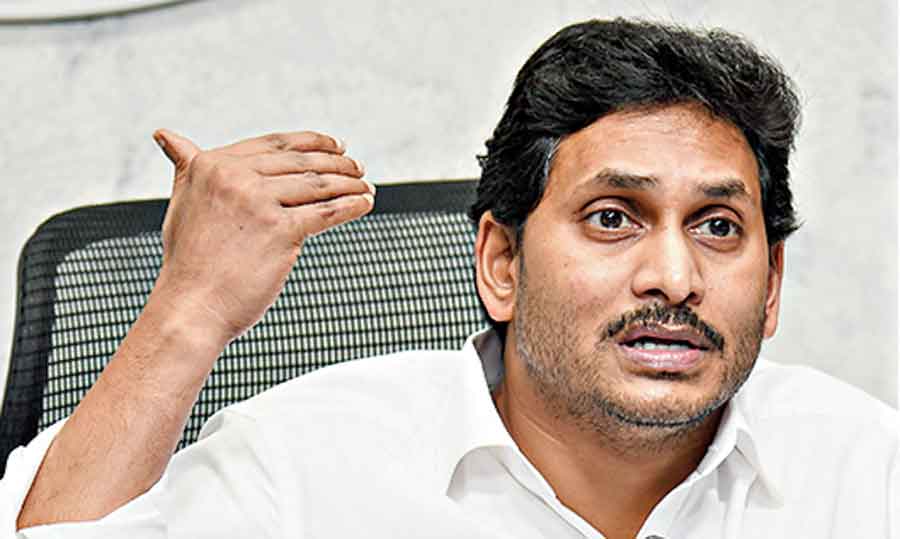 The Bar associations of the Supreme Court and Delhi High Court have strongly condemned Andhra Pradesh chief minister Y.S. Jagan Mohan Reddy’s allegation of judicial impropriety against Justice N.V. Ramana as an attempt to “scandalise” and “overawe the independence” of the judiciary.

In addition, two advocates on Wednesday filed a joint petition in the Supreme Court seeking contempt proceedings against Jagan and his removal as chief minister for his “scandalous” remarks against Justice Ramana, the second senior-most judge of the apex court and the next in line to be the Chief Justice of India.

In a letter to the CJI, Jagan has accused Justice Ramana of favouring the chief minister’s political rival and Telugu Desam Party leader N. Chandrababu Naidu. Jagan has also alleged that Justice Ramana’s daughters had purchased land under questionable circumstances in Amravati before the site was chosen for the new Andhra capital.

“The SCAORA (Supreme Court Advocates on Records Association) notes with deep anguish the contents of the letter dated 06-10-2020 written by a Chief Minister to the Hon’ble the Chief Justice of India, concerning a sitting judge of the Hon’ble Supreme Court of India, next in line to become the Chief Justice of India,” the top court’s bar association secretary, S. Joseph Aristotle, said in a statement on Wednesday.

“The SCAORA condemns the act of the unwanted release of the said letter on 10.10.2020 in a press conference… as it tends to scandalise and breach the independence of the judiciary,” the statement added.

The Delhi High Court Bar Association said in a separate statement that the letter written by Jagan was highly contemptuous and an attempt to overawe the judiciary.

“…The writing and circulation of the ill-founded letter dated 06.10.2020 written by Shri Jagan Mohan Reddy to Hon’ble the Chief Justice of India, which unfairly and without reason casts serious aspersions on the alleged conduct of Hon’ble Mr Justice N.V. Ramana, judge Supreme Court, and Hon’ble judges of the High Court of Andhra Pradesh is an abject and uncalled for interference in the due administration of justice by the Honble High Court of Andhra Pradesh,” Abhijat, secretary of the association, said.

The Bar association pointed out that Justice Ramana has been “one of the most virtuous judges with the highest level of integrity”.“The Delhi High Court Bar Association further unequivocally, categorically and in the strongest possible terms condemns the allegations cast upon Hon’ble Mr Justice N.V. Ramana,” the outfit added.

Multiple judicial sources had told The Telegraph earlier this week that there was more to Jagan’s letter than meets the eye.

Justice Ramana is scheduled to become the next CJI on April 24, 2021, and demit office on August 26, 2022. The judicial sources in New Delhi suspect that Justice Ramana is being targeted because he is heading a bench that has recently passed a series of orders to the Centre, states, Union Territories and all high courts to expedite the trial of criminal cases against all lawmakers across the country within a year.

They suspect that attempts are underway to scuttle the initiative to expedite the cases. The issue had been pending with the apex court since 2017.

Jagan himself is an accused in corruption cases and had served close to 16 months in jail as an Opposition leader in a disproportionate assets case. The trial against him is on the verge of completion.

On October 6, the date mentioned on the letter, Jagan had met Prime Minister Narendra Modi for the stated purpose of discussing development projects.

In the Supreme Court on Wednesday, advocates G.S. Mani and Pradeep Kumar Yadav drew attention to the cases against Jagan.

According to the petition, which is yet to be formally listed, Jagan is “facing more than 30 criminal cases, including (those of) money laundering and corruption, in the court which are very serious in nature”.

“In order to get personal gain or benefit from the court by abusing his power and post as the Chief Minister of AP State, (Jagan) is openly making false, vague, scandalised remarks and political allegations against a sitting judge of the Supreme Court only to tarnish the image of the judiciary in the public mind,” the petition said, seeking contempt of court proceedings against the YSR Congress politician.

The advocates urged the apex court to take appropriate action against Jagan for his removal as chief minister and also order a CBI probe into the intention behind his allegations against Justice Ramana.

A conviction and harsh sentencing in a corruption case can seal the fate of political careers for long. A convict can stand disqualified for six years from contesting elections from the date when the actual sentence ends.