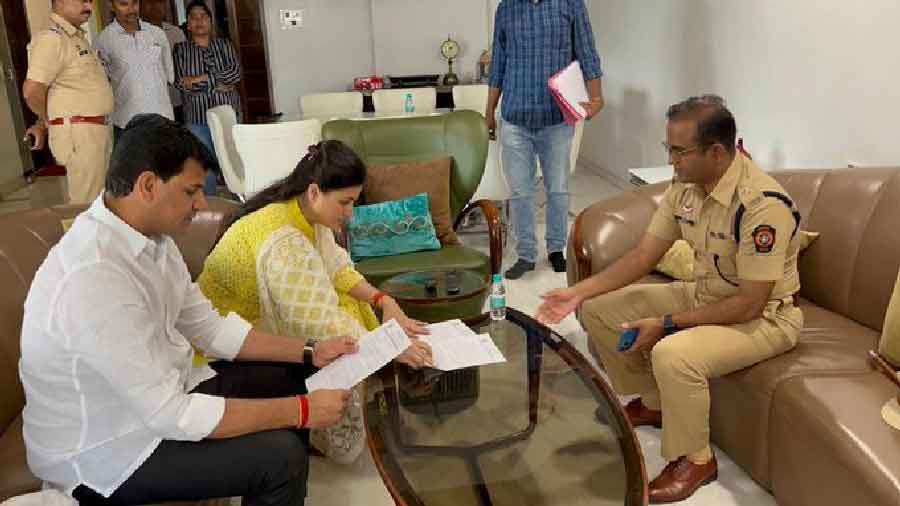 Mumbai Police on Saturday evening arrested MLA Ravi Rana and his wife, MP Navneet Rana for allegedly "creating enmity between different groups" after escorting them out of their house in suburban Khar here amid high drama. The development came hours after the couple cancelled their plan to recite the Hanuman Chalisa outside Maharashtra Chief Minister Uddhav Thackeray's private residence `Matoshree' here.

The Ranas were booked under IPC section 153 (A) (Promoting enmity between different groups on grounds of religion, race, place of birth, residence, language, etc., and doing acts prejudicial to maintenance of harmony), and section 135 of the Mumbai Police Act (violation of prohibitory orders of police), said an official of the Khar police station in western Mumbai.

"If allowed, the Rana couple would have gone there (Matoshree), recited Hanuman Chalisa and returned without creating any news. I don't understand why so many people had gathered at several places as if they (Rana couple) were planning some attack. What kind of politics is this?" the BJP leader said.

Earlier, as Shiv Sena workers laid siege to the building where the Ranas, both independent legislators from eastern Maharashtra, were staying and demanded apology from them, police officials persuaded the couple to go to Khar police station with them.

The couple were initially seen arguing with the police inside the building, saying they would not budge until criminal cases were also registered against Shiv Sena leaders who `threatened' them. Navneet Rana also demanded that police produce a warrant. But later they agreed to step out, and left in two police vehicles.

Before climbing into police vehicles, Navneet Rana, the Amravati MP, and Ravi Rana, MLA from Badnera, were seen shouting slogans, looking in the direction of Shiv Sena workers who were outside. Sena workers, led by Yuva Sena leader Varun Sardesai, were outside the building since morning and had vowed not to allow the Ranas to leave until they apologized. There were several women among them.

An empty water bottle was also thrown in the direction of the Ranas when the came out. Sardesai told Sena cadres that the police would be escorting the couple to the police station and they should stay calm and not take law into their hands.

Ravi Rana said if a case was being registered against them, cases should be registered against Sena leaders Anil Parab and Sanjay Raut too for `making threatening statements'. Earlier, amid stiff resistance by workers of the ruling Shiv Sena, Ravi Rana and Navneet Rana on Saturday morning dropped their plan of reciting the Hanuman Chalisa outside Matoshree in suburban Bandra.

They did not want to disturb the law and order situation in view of Prime Minister Narendra Modi's visit to the city on Sunday, Ravi Rana said. In the morning, Shiv Sena workers broke through the barricades and tried to enter the premises of their Khar residence. But the situation was brought under control by the police.