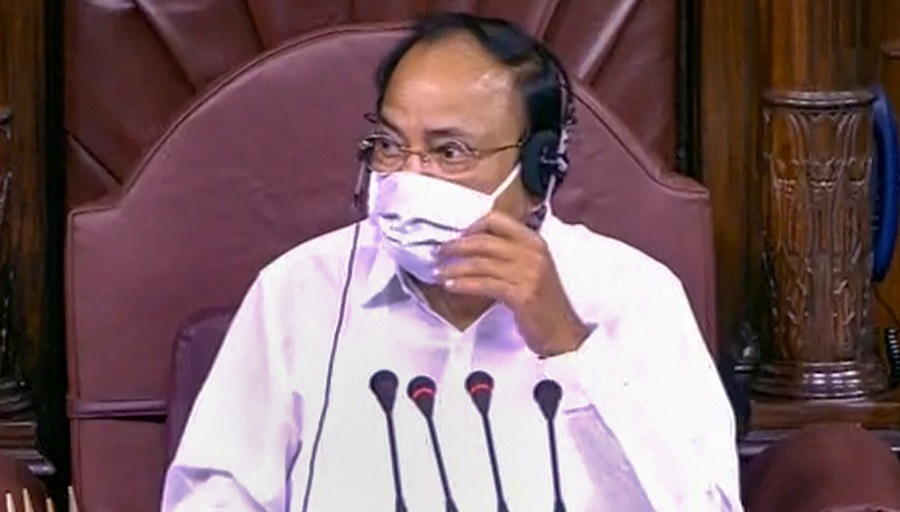 The Rajya Sabha on Monday suspended eight MPs, including TMC leader Derek O'Brien and AAP’s Sanjay Singh, for the remaining part of the monsoon session over their "unruly behaviour" during the passage of farm bills.

Chairman M Venkaiah Naidu termed the behaviour of Opposition MPs  on Sunday as "very unfortunate, unacceptable and condemnable" and one that has "tarnished the image of Parliament, particularly elders' House."

He also rejected the notice for a no-confidence motion moved by Leader of the Opposition Ghulam Nabi Azad and 46 other MPs against Deputy Chairman Harivansh, who was in the chair during the bedlam on Sunday, saying it was not in proper format and does not give the required 14-day notice period.

Two key farm bills were passed by Rajya Sabha on Sunday with voice vote amid protests by Opposition members who were demanding that the proposed legislation be referred to a House panel for greater scrutiny.

Amid opposition, the motion was adopted by voice vote and the Chairman asked them to leave the House but they remained present and protested against the ruling.

Naidu called for taking up a call attention motion on GST compensation to states where O'Brien, Ragesh and Kareem were listed as movers. But with members protesting, he moved on to the next listed business saying they were not interested.

As the protests continued, he adjourned the proceedings for 20 minutes. The House saw three more adjournments as the suspended members remained present in the House and Opposition parties protested against the decision.

Soon after Zero Hour, Naidu said he was "pained" at the happenings during the passage of the two bills. He condemned the unruly behaviour of some members and also the "physical threat" to the deputy chairman.

As some Opposition members wanted to put across their point of view, Naidu asked them to obey the Chair and not speak in between. He rejected their point of order and when they persisted, he named O'Brien and asked him to leave the House.

"It was a really bad day for democracy," he said.

"Climbing on the table, dancing, shouting in the Well, tearing papers, breaking the mike, obstructing deputy chairman from doing his duties, throwing papers, rule book on deputy chairman, is it a parliamentary standard," he asked.

"I only suggest to members of Parliament please do some introspection and is it a way to conduct ourselves?" he said.

Naidu said marshals prevented ugly scenes. "If marshals were not called on time what would have happened to the deputy chairman. I am worried. He says he was abused with objectional words. This is very unfortunate. This should not be allowed. If you have any problem, the way (out) is to discuss, debate and decide.

"If you have numbers, vote against the resolution. Deputy Chairman also stated that if you please go to your seat he will conduct voting...it is on record." he said.

He said the deputy chairman was "physically threatened. So I am worried he would have been harmed also. Keeping this in mind, the government wants to move a resolution," he said.

Not in proper format

Naidu said he had received a letter expressing no confidence against the deputy chairman. "I have gone through the entire proceedings of the House yesterday (Sunday). In light of allegations made by the Leader of the Opposition and other members, I observe that the deputy chairman had persistently requested the members to go to their seat and participate in the debate and move amendments.

"Obviously in view of the continuous disruption of the House, the division could not have taken place... Certainly, the conduct of some members grossly crossed all barriers of parliamentary decorum and etiquette and thereby bringing down the prestige of the House," he said.

He said after carefully going through the provisions of the Constitution, rules of the House and past precedence, it is "observed at the outset that the motion is not in a proper format."

"As per provision of Article 90(C) of the Constitution, a notice period of 14 days is required for moving a resolution of the motion. As the House is going to be adjourned sine die on October 1...the notice does not complete the required period of 14 days. Hence I rule that motion is not admissible," he said.

Minister of State for Parliamentary Affairs V. Muraleedharan moved a resolution that eight members be suspended for the remaining part of the session "for their unruly behaviour especially with the chair."

"And their gross disorderly conduct in the violation of rules and etiquette of Rajya thereby bringing disrepute to this House and causing insult to the office of deputy chairman," he said reading out the motion.

Amid protests, the motion was passed by voice vote and the Chairman said the eight members are suspended for the remaining part of the session.

Naidu also noted that Covid-19 precautions were violated by some members on Sunday.