Advertisement
Home / India / Prashant Bhushan says his tweets were 'bona-fide' opinion, not contempt
Case relates to two of his posts on June 27 and 29

Prashant Bhushan says his tweets were 'bona-fide' opinion, not contempt

In an affidavit replying to the SC contempt notice, he said the government subverted independent institutions like the Comptroller and Auditor General, EC and mainstream media 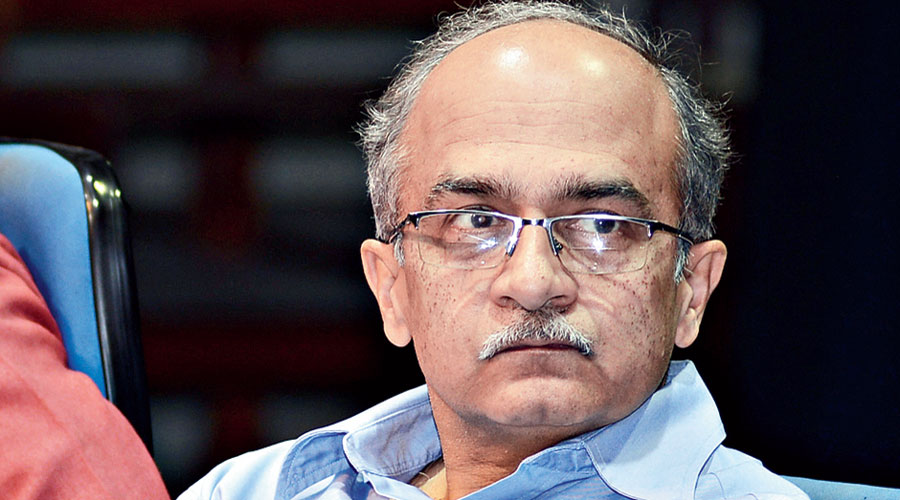 Lawyer Prashant Bhushan has informed the Supreme Court that it was his “bona fide opinion” that democracy was destroyed in the country during the tenure of the last four Chief Justices of India.

“Such expression of opinion, however outspoken, disagreeable or however unpalatable against some, cannot constitute contempt of court,” he added.

In an affidavit replying to the contempt notice issued by the top court for two of his tweets, Bhushan said the Narendra Modi government had subverted independent institutions like the Comptroller and Auditor General of India, Election Commission and the mainstream media, in spite of which the Supreme Court had failed to intervene.

Bhushan, who had tweeted about a picture showing the Chief Justice of India seated on a Harley-Davidson motorbike, said the Chief Justice was not the court and that raising issues of concern about the manner in which a CJI “conducts himself during ‘court vacations’, or raising issues of grave concern regarding the manner in which four CJIs have used, or failed to use, their powers to allow the spread of authoritarianism, majoritarianism, stifling of dissent, widespread political incarceration… cannot and does not amount to ‘scandalising’ the court”.

He sought to draw the inference that the Supreme Court had not dealt fairly with matters relating to the Ramjanmabhoomi-Babri Masjid land dispute, the abrogation of Article 370 in Jammu and Kashmir, electoral bonds issued by the Modi government, the National Register of Citizens (NRC) in Assam, protests against the Citizenship Amendment Act (CAA) and a host of other issues linked to the fundamental rights.

Referring to these issues, Bhushan said in the affidavit: “Though the Superior Courts, especially the Supreme Court, have been entrusted with the responsibility by our Constitution to safeguard democracy and our fundamental rights and ensure proper functioning of regulatory institutions, it can be seen that in the last six years, as the spirit of democracy was being extinguished in this country by throttling of fundamental rights and transgressions of delineated powers by the executive and legislature and subverting of our institutions, the Supreme Court largely failed in its duty to protect these and thus failed to prevent the subversion of our democracy….”

“The freedom of speech and expression guaranteed to every citizen under Article 19(1)(a) is the ultimate guardian of all the values that the Constitution holds sacred: Rule of Law, Separation of Powers, Secularism, Free & Fair elections, etc,” the affidavit said.

The contempt case against Bhushan relates to two of his tweets on June 27 and 29. The case will come up for hearing before the bench of Justices Arun Mishra, Bhushan Gavai and Krishna Murari on August 5.

Justifying most of his tweet on Chief Justice of India S.A. Bobde and the Harley-Davidson bike, Bhushan said: “The tweet regarding the CJI riding a motorcycle dated 29.06.2020 was made primarily to underline my anguish at the non-physical functioning of the Supreme Court for the last more than three months, as a result of which fundamental rights of citizens, such as those in detention, those destitute and poor, and others facing serious and urgent grievances were not being addressed or taken up for redressal.”

Bhushan said: “The fact about the CJI being seen in the presence of many people without a mask was meant to highlight the incongruity of the situation where the CJI (being the administrative head of the Supreme Court) keeps the court virtually in lockdown due to Covid fears (with hardly any cases being heard and those heard also by a unsatisfactory process through videoconferencing) and is on the other hand seen in a public place with several people around him without a mask.

“The fact that he was on a motorcycle costing 50 lakhs owned by a BJP leader had been established by documentary evidence published on social media. The fact that it was in Raj Bhavan had also been reported in various sections of the media. My expressing anguish by highlighting this incongruity and the attendant facts cannot be said to constitute contempt of court.”

Bhushan added: “If it were to be so regarded, it would stifle free speech and would constitute an unreasonable restriction on Article l9 (1Xa) of the Constitution….”

Sources close to the CJI had then said that Justice Bobde was “not riding” the motorbike but merely sat on it to get a feel of the machine. He was wearing a mask but had removed it to give the photographers a better view.

(NDTV reported that in the affidavit, Bhushan expressed regret for a part of the tweet but stood by the remaining portion. “At the outset I admit that I did not notice that the bike was on a stand and therefore wearing a helmet was not required. I therefore regret that part of my tweet. However, I stand by the remaining part of what I have stated in my tweet.”)

Bhushan justified his June 27 tweet that “…democracy has been substantially destroyed in India during the last six years”.

“So far as the second tweet dated 27.06.2020 is concerned, it has three distinct elements, each of which is my bona fide opinion about the state of affairs in the country in the past six years and the role of the Supreme Court and in particular the role of the last 4 CJIs.

“The first part of the tweet contains my considered opinion that democracy has been substantially destroyed in India during the last six years. The second part is my opinion that the Supreme Court has played a substantial role in allowing the destruction of our democracy and the third part is my opinion regarding the role of the last 4 Chief Justices in particular in allowing it.

“Such expression of opinion, however outspoken, disagreeable or however unpalatable against some, cannot constitute contempt of court,” the lawyer said, referring to judgments by courts in Britain, the US and Canada.

“What I have tweeted is thus my bona fide impression about the manner and functioning of the Supreme Court in the past years and especially about the role of the last 4 chief Justices... vis-a-vis their role in being a check and balance on the powers of the executive, their role in ensuring that the Supreme Court functions in a transparent and accountable manner and was constrained to say that they contributed to undermining democracy,” Bhushan said.

The lawyer contended that the CJI was not the court and his actions during vacations were amenable to criticism as such acts did not form part of the judicial proceedings.

“It is also submitted that the Chief Justice is not the court, and that raising issues of concern regarding the manner in which a CJI conducts himself during ‘court vacations’, or raising issues of grave concern regarding the manner in which four CJIs have used, or failed to use, their powers as ‘master of the roster’ to allow the spread of authoritarianism, majoritarianism, stifling of dissent, widespread political incarceration… cannot and does not amount to ‘scandalising’ or lowering the authority of the court.

“The court, in this case the Supreme Court, is an institution consisting of 31 judges and its own longstanding and enduring traditions and practices, and the court cannot be equated with a Chief Justice, or even a succession of four CJIs. To bona fide critique the actions of a CJI, or a succession of CJIs, cannot and does not scandalise the court, nor does it lower the authority of the court. To assume or suggest that ‘the CJI is the SC, and the SC is the CJI’ is to undermine the institution of the Supreme Court of India,” Bhushan asserted.

He referred to two recent speeches by Justice D.Y. Chandrachud and Justice Deepak Gupta that said that suppression of dissent has a chilling effect on democracy.

Justice Chandrachud, while delivering the P.D. Desai Memorial Lecture in the Gujarat High Court Auditorium on February 15, had expressed his anguish at the way dissent was being labelled as anti-national, thereby striking “at the heart of our commitment to protect constitutional values and the promotion of deliberative democracy”.

In the course of this speech, delivered at the height of the anti-CAA protests in the country, he had stated that “employment of state machinery to curb dissent instils fear and creates a chilling atmosphere on free speech, which violates the rule of law and distracts from the constitutional vision of a plural society”.

On February 24, Justice Deepak Gupta delivered a speech on democracy and dissent, in which he said the suppression of dissent had a chilling effect on democracy, and called for “on impartial decision-making process in the judiciary”.

Bhushan recalled the unprecedented media conference held on January 12, 2018, by four then judges of the Supreme Court to express their apprehension about a threat to democracy and their criticism of then CJI Dipak Misra.

“So serious were the misgivings of the senior sitting judges that they felt compelled to disregard the Code of Judicial Conduct to call a press conference and warn citizens of (the) danger to democracy because of danger to a free judiciary. Perhaps left with no other alternative, the judges felt compelled to exhort the citizens to protect democracy by saying that, ‘We are discharging our duty to the nation by telling you what’s what’,” Bhushan said.

“To prevent a citizen from forming, holding and expressing a bona fide opinion in public interest on any institution that is a creature of the Constitution is not a reasonable restriction and violates the basic principles on which our democracy is founded,” Bhushan said in the affidavit.

“To prevent a citizen from ‘evaluating’ in public interest the performance of any institution that is a creature of the Constitution and putting it in the public domain to inform, generate a debate, build public opinion for reforms/change is violative of our right to free speech.

“The power of contempt under Article 129 is to be utilised to aid in administration of justice and not to shut out voices that seek accountability from the court for its errors of omissions and commissions….

Bhushan referred to the 2017 seven-judge constitution bench judgment in the Justice C.S. Karnan case. “…Bona fide criticism of the judiciary should be protected and welcomed by the judges and they should self-introspect as they are not infallible.” It was further held that criticism of the conduct of judges or a group of judges may not amount to contempt if it was bona fide and done in public interest.

The affidavit said that fingers were being pointed at the independence of the Election Commission and the CAG.

“Officers from Gujarat who are said to have been close to the Prime Minster and home minister Amit Shah have been appointed to the Election Commission. It is because of the erosion of public confidence in the independence of the Election commission that people have become very nervous about the integrity of the electronic voting machines; and there is now therefore a persistent demand, especially by the Opposition, to go back to paper ballots,” Bhushan said.