Rain havoc in Bangalore: Overnight spell brings IT hub to its knees 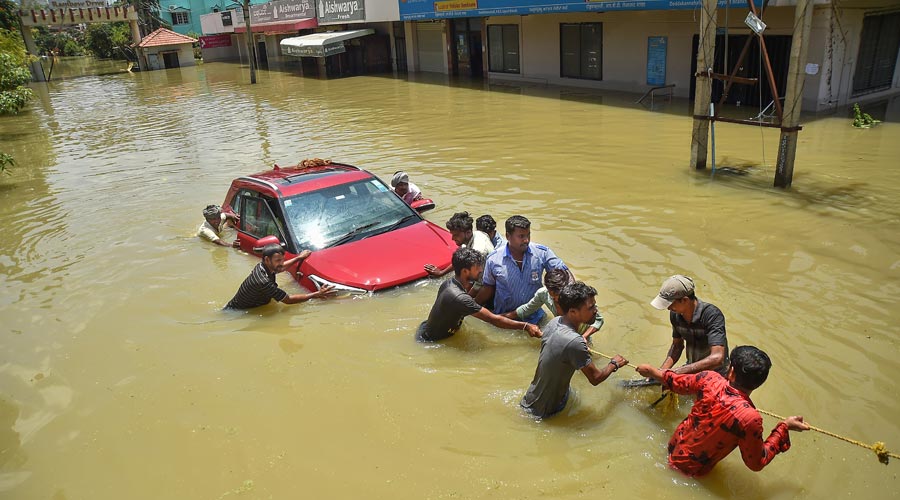 Torrential overnight rains left India's IT capital struggling on Monday as inundation and waterlogging threw life out of gear, leading to a public outpour of anger against alleged misgovernance and the powers that be.

Boats and tractors were pressed into service in certain parts and a forecast of more rains has caused worry among the people residing in the vulnerable areas, even as many have started moving to safer zones, taking with them only necessary belongings.

Cars and two wheelers parked either in the basements or in front of the houses were submerged in parts of the city.

Water-logging in localities like Rainbow Drive layout, Sunny Brooks Layout, some areas on Sarjapur Road were to such an extent that tractors and boats were used to ferry students and office goers in the morning.

Rains have battered many parts of the city like Whitefield, Indiranagar, Kengeri, R R Nagar, Bommanahalli, Marathalli, and Mahadevapura.

While several areas on the Outer Ring Road (ORR) that houses some of the IT companies, were affected by rains and flooding, some firms were forced to ask their employees to work from home.

Most parts of the ORR resembled lakes, affecting the movement of vehicular traffic. Office goers and the general public pushing their two wheelers in knee deep water was a common sight, even as a resident rued the 'plight' of ORR.

"I was on my way to the office, it's knee-deep water here, my vehicle stopped mid-way because of water entering the engine parts. Now I'm stuck here, not sure what to do and where to reach," said a man in his mid-thirties.

Besides traffic jams, non-availability of public transport like buses, autos and cabs on time was another concern that people faced today.

Ambulances got stuck in traffic jams at various places.

Many people took to Twitter to air their grievances, with a short video showing air passengers wading through ankle-deep water in what seemed to be the city airport's entrance.

IT industry veteran Mohan Das Pai uploaded a video on Twitter, titled "Pls see in Bengaluru," that showed a man dressed up as Lord Ganesh and wading through near knee-deep water, even as traffic was seen crawling in the background.

One Twitter user said he was stuck for five hours at ORR.

"Govt. will do nothing - till IT companies move out of Bengaluru. Till their revenue gets a hit," an angry citizen said. While a twitter user blamed "massive deforestation" and road heights going up "illegally" with "illegal" high rises, another said the only solution is to reclaim all lakes and remove encroachments.

With houses under water, many in areas like Munnekolalu were seen shifting to safer areas for the time being.

"The rain started at 8 pm last night and was on till 5 am today and the ground floor is covered by water. We are on the second floor, not sure what will happen if it rains again today...so we decided to evacuate and move out from here to a relative's place," said a man who left his flat in a multi-storied apartment, along with wife and a kid, with the help of a rescue team.

A woman in Indiranagar said, "there has been 4-5 feet water since last night, we were unable to move out, our cars parked at the basement have been damaged, we are getting water and food from outside."

As rescue teams tried to move out people from areas submerged, some local groups started distributing food kits and water bottles to the needy and tried shifting people with the help of tractors and JCBs.

Mother of a differently abled child said, "it was difficult without food and water with the kid, we thank these people who helped us, and I request authorities to make some arrangements to help us for the time being."

A public transport bus was stuck in rainwater near Whitefield and locals pulled it out with the help of a rope. People helping to pull out vehicles that were stuck the midway was a common sight in many parts of the city.

A pedestrian, who fell into the drain dug by the city civic body to lay pipes this morning, near the RMZ Ecospace was rescued by security staff and locals. The individual was unconscious and was admitted to a private hospital.

Chief Minister Basavaraj Bommai said two State Disaster Response Force (SDRF) teams were being sent to Mahdevapura and Bommanahalli zones in the city that have been worst affected.

"There have been heavy rains in Bengaluru, I have spoken to the Commissioner (BBMP) and other officials. I have asked officials to depute two SDRF teams to Mahdevapura and Bommanahalli zones in the city that have been worst affected, with boats and other equipment..also engineers are there."

Stating that he has instructed officials to see to it that water is drained out from the inundated roads at the earliest, he said, "there is a plan on how to create a temporary drain and how to go about it (drain out water), it will be operationalised today."

Due to heavy rains on Sunday, Bangalore Water Supply and Sewerage Board's (BWSSB) pump house unit that manages Cauvery water supply to city at T K Halli near Mandya has been flooded and has caused damage to machinery there, Bommai said, adding, work on draining out water is underway.

He visited the site later in the day and asked officials to see to it that things are set right soon and contingency plans are put in place to ensure water supply is not hampered to the city by using borewells and tankers.

However, BWSSB has warned of water supply disruption in several areas of Bengaluru on Monday and Tuesday.

Meanwhile, according to the Weather office forecast for the next 48 hours, a few spells of light to moderate rain or thundershowers, heavy at times are very likely in the city.