'Grover and I are being targeted for the human rights work that we have done over the years,' Jaising said 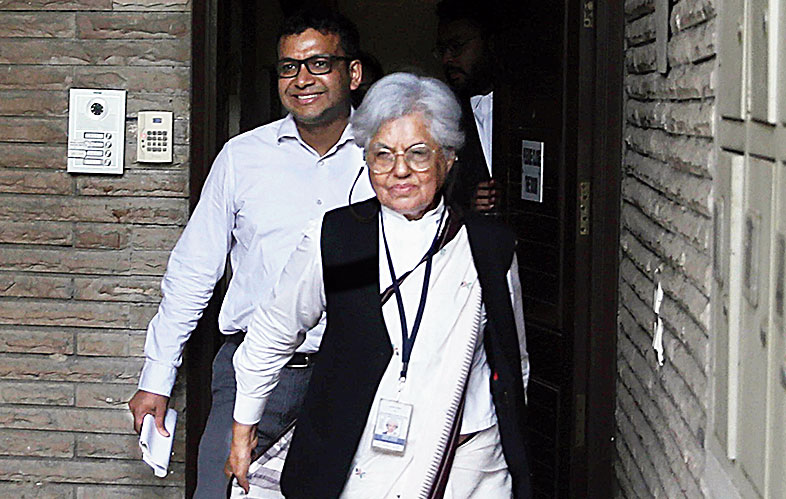 The CBI knocked on the doors of Indira Jaising, a senior lawyer who has been a vocal critic of some of the policies of the Narendra Modi government, at 5am on Thursday as part of raids on the premises and offices associated with Lawyers Collective, an NGO run by the advocate and her husband Anand Grover.

The swoop, carried out on the basis of a complaint lodged by the Union home ministry about alleged violations of the Foreign Contribution (Regulation) Act (FCRA), drew widespread condemnation from academics, civil rights activists, artists and lawyers.

“Mr Grover and I are being targeted for the human rights work that we have done over the years,” Jaising told reporters.

Last month, the CBI had registered an FIR against the NGO for allegedly “misusing” or “diverting” foreign contributions. The gist of the charges appears to be that the NGO paid Jaising Rs 96.60 lakh as remuneration between 2009 and 2014 from foreign contributions and that she had not taken clearance from the government despite being additional solicitor-general then.

Jaising, Grover and Lawyers Collective had earlier issued a media statement denying “any allegation of misutilisation of any funds”.

Although the CBI did not name Jaising as an accused, the home ministry’s complaint, which is now part of the FIR, mentions allegations against her.

The International Commission of Jurists, which advocates justice and human rights, condemned the raids and underscored several factors in a statement.

In 2016, the Union ministry had cancelled the FCRA licence of the NGO for allegedly using foreign contributions for “political purposes” and other unstated reasons.

Grover, the president of the NGO, and Jaising, who was additional solicitor-general when the UPA was in power, have fought many cases in the public interest.

The Supreme Court had issued a notice to the NGO last month on alleged FCRA violations based on a petition filed by another organisation. Grover had then alleged “victimisation” as Jaising had taken up “the issue of allegations of sexual harassment against CJI Ranjan Gogoi by a former employee of the apex court”.

In its order cancelling Lawyers Collective’s FCRA licence in 2016, the home ministry had alleged discrepancies on foreign contributions in the returns the NGO had filed.

It was alleged that Jaising’s foreign travels as additional solicitor-general had been funded by Lawyers Collective using foreign contributions and without prior approval from the ministry.

The ministry underlined that the additional solicitor-general is paid by the government from the Consolidated Fund of India and carries out sensitive and high-level work.

The home ministry had alleged that Jaising had violated the FCRA by “not seeking clearances from the government for receiving foreign contributions in the form of remuneration from the organisation and accepting foreign hospitality”. The ministry complaint says Lawyers Collective received over Rs 32.39 crore in foreign aid between 2006-07 and 2014-15.

In a statement on Thursday, the CBI said the case had been registered on June 13 on a complaint from the home ministry against the NGO, its president and unknown office bearers/functionaries and unknown private individuals and public servants.

“It was alleged in the complaint that during the years 2006 to 2014, the accused persons entered into a conspiracy in Mumbai, Delhi and other places with an intent to cheat the Government of India in the matter of misusing/diverting foreign contributions received in the Mumbai-based NGO,” the statement said.

Civil society termed the raids “coercion and intimidation”, saying they were “nothing short of a brute show of intimidation as well as gross abuse of power”.

“This is especially so since both the advocates, well known for their pioneering work in the field of human rights, and their NGO, Lawyers Collective, have fully cooperated with the authorities ever since criminal charges were filed against them in alleged FCRA violation cases. The raids that have taken place today despite this show of cooperation are shocking,” said a statement issued through the Safdar Hashmi Memorial Trust.

Lawyer Prashant Bhushan said the raid was a clear act of vendetta. “Registration of cases and raids by government agencies have now become the way of the government to harass and intimidate opponents,” he said.