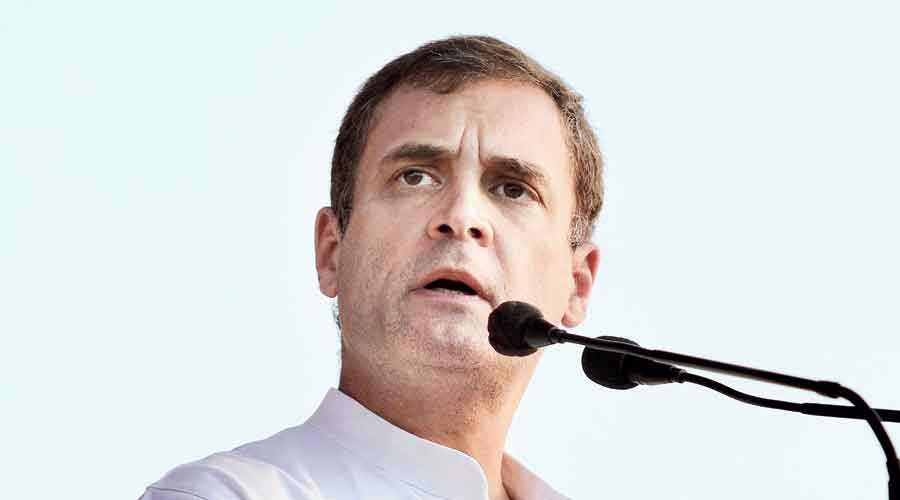 Sources said Rahul Gandhi had decided to write the letter after Wednesday’s experience at a meeting of the standing committee on defence, where the army brass were made to discuss the colours and designs of uniforms instead of critical concerns relating to national security and strategic affairs.
PTI
Sanjay K. Jha   |   New Delhi   |   Published 18.12.20, 02:38 AM

Rahul Gandhi has written to Lok Sabha Speaker Om Birla about the functioning of parliamentary standing committees, seeking his intervention to ensure that agendas are fixed according to these panels’ roles and objectives.

Sources said Rahul had decided to write the letter after Wednesday’s experience at a meeting of the standing committee on defence, where the army brass were made to discuss the colours and designs of uniforms instead of critical concerns relating to national security and strategic affairs.

Rahul is said to have expressed dismay at time being wasted on matters that could have been decided by the defence forces themselves.

Sources said Rahul’s letter urged the Speaker to ensure that the discussions and presentations held in the committee “are in consonance with the role and objective of the institution”.

Regretting that committee chairman and BJP member Jual Oram had not allowed him to speak, the Congress MP entreated the Speaker to protect the right of elected members to express their views at the panel meetings.

A member of the committee on defence said that at Wednesday’s meeting, Rahul had said: “Our job is to discuss critical national security matters of a strategic nature.”

He had contended that the topic and the nature of the presentation did not do justice to the category and level of discussion expected in the committee.

Rahul is said to have raised these points in the letter to the Speaker as well, expressing “dismay” at the content of the discussion and the way the meeting was conducted.

Proceedings of the department-related standing committees and other parliamentary panels are kept confidential so that the members do not feel compelled to blindly follow the party line at the discussions.

A source said Rahul had underlined in his letter that the standing committee on defence, being the premier interface between the defence forces and elected representatives, is meant to provide legislative oversight for the policies and decisions of the defence ministry.

He has told the Speaker he feels disturbed that the panel chairman got the Chief of the Defence Staff and the leaderships of the army, navy and air force, who have important matters to deal with, to spend an entire afternoon explaining the colours and types of uniforms and insignia worn by the various ranks.

Congress sources said the committee chairman had asked the members before the meeting to suggest matters they thought were important enough for discussion.

Since Rahul was in his constituency, Wayanad, on the date of the last meeting, he had written to the chairman suggesting these issues for discussion: “1. Our strategy against China’s aggressive posture on our northern border in coordination with Pakistan. 2. Our response to China’s reusable autonomous armed drones and unmanned systems strategy, its approach to information warfare and its rocket, strategic force and space capabilities. 3. The inter-governmental agreement on the purchase of Rafale warplanes.”

While the government’s reluctance to discuss details of the Chinese intrusion with Opposition members has been obvious, accepting Rahul’s demand to reopen the Rafale debate too would be out of the question for the ruling dispensation.

The committee chairman fixed military uniforms as the agenda for Wednesday’s discussion. Congress members, who thought the border situation was too serious to be ignored, were further outraged when they realised the presentation would not be on the logistics or procurement of uniforms but on their colour and design.

Rahul has reaffirmed his concern in the letter to the Speaker, stating: “You are aware that we are currently facing a serious national security challenge on our borders and that China has forcibly occupied our territory and martyred 20 of our soldiers. There are many critical matters to discuss at a time like this.”

A panel member recalled what Rahul had said at the meeting: “The officers in the room are the best strategic minds the country has and it is disrespectful to their tremendous skills and experience to make them do a presentation to us on the types of uniforms and badges our forces wear.”

Rahul insisted that it was not the committee’s place to tell the armed forces what to wear.

“India’s defence forces are independent institutions and what they wear is their decision to make, in accordance with their history, traditions and practice,” he had said.

Rahul has now explained to the Speaker how Oram disallowed him from speaking despite support for him from other members.

He has written that he had to quietly leave the room when he was not allowed to speak despite several requests. The chairman had firmly said: “Aap nahin bolenge (You will not speak).”

On Thursday, information and broadcasting minister Prakash Javadekar accused Rahul of having no respect for constitutional procedures, claiming he had attended only two of the 14 meetings of the standing committee on defence.

“Rahul Gandhi should know that Parliament’s standing committee is not a place to protest. We strongly condemn his move to walk out,” Javadekar said.

“In the last one-and-a-half years, Rahul Gandhi has attended only two of its 14 meetings,” Javadekar added.