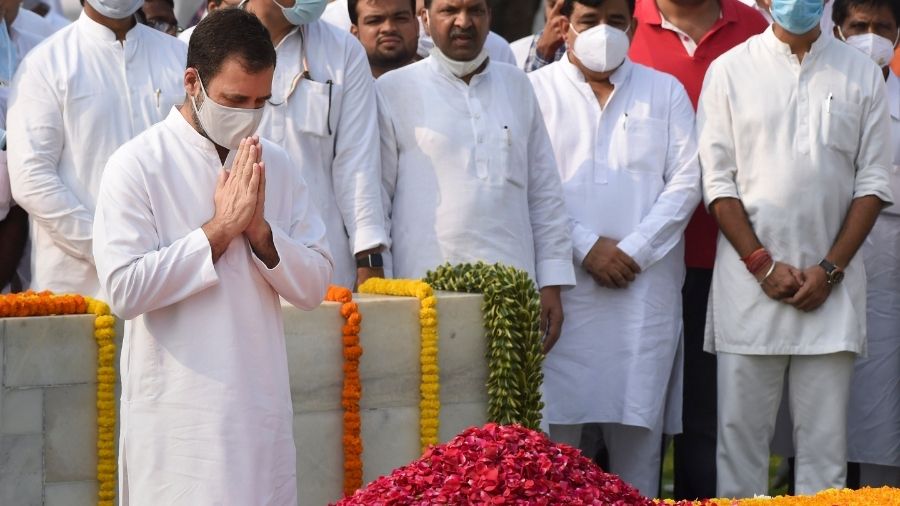 In a tweet in Hindi, Rahul Gandhi paid tributes to Mahatma Gandhi and posted the quote, "Vijay ke liye kewal ek satyagrahi hi kaafi hai (Only one 'satyagrahi' is enough for victory)", in a swipe at the government over the farmers' protest.

He also used the hashtag farmers protest and posted a video collage with glimpses from the farmers' protest and Mahatma Gandhi's satyagraha for independence.

"The flag of Bapu's ideas of truth, non-violence and justice is still flying high in the farmers' 'satyagraha' against the black farm laws, in the fight for justice for the tribals of Sonbhadra and for the Dalit girl of Hathras, and in the rising voices for the ideology of love against the ideology of hatred," Priyanka Gandhi said in a tweet in Hindi.

"Farmers and soldiers are the pride of India and hailing them reflects the sentiments of crores of Indians. This sentiment of crores of Indians was conveyed in the 'Jai Jawan, Jai Kisan' slogan of former prime minister Lal Bahadur Shastri given at a rally in Uttar Pradesh's Prayagraj," she said in a tweet in Hindi.

"Shastri ji's simplicity and determination are a source of inspiration even today. Salute to this son of Congress!" he tweeted.

In a tweet, the Congress, on its official Twitter handle, said, "We pay tribute to the father of the nation, Mahatma Gandhi on his birth anniversary. As a guiding light, his ideals guide us to work for the nation and its people, following the path of peace and non-violence."

In its tribute to Shastri, the Congress said he was an active participant in the freedom struggle against the British and contributed to nation-building until his last breath.