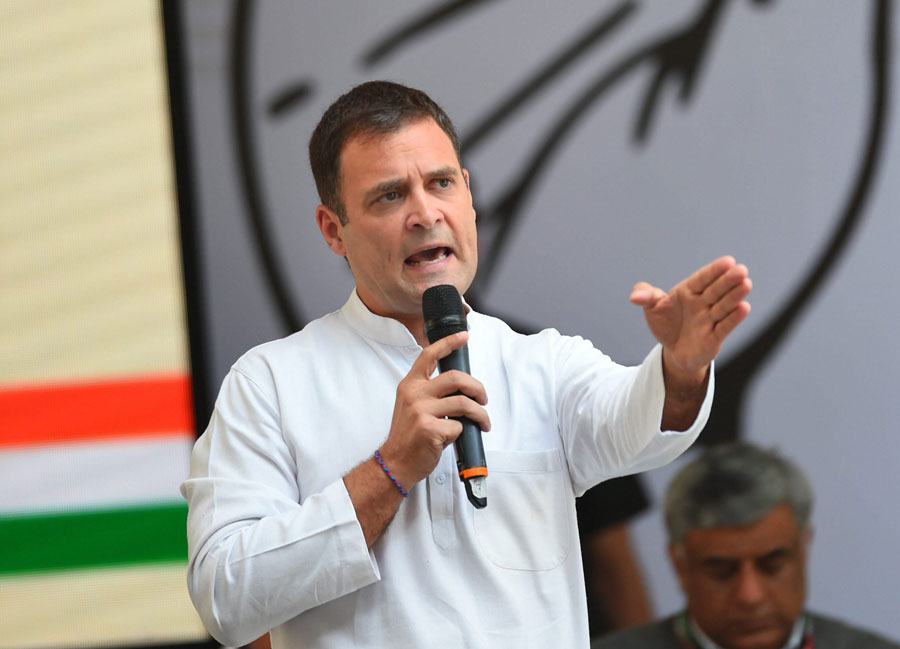 Rahul Gandhi on Tuesday shrugged off the possibility of Prime Minister Narendra Modi hijacking the electoral discourse by leveraging hyper-nationalism, asserting that the narrative had already been set around the Congress’s promised minimum income guarantee scheme NYAY.

The Congress manifesto, many felt, looked more like a radical welfare project than a political document, with its promise to “repair the damage caused by a callous, divisive and deceitful BJP government”. Asked about such a perception, Rahul said: “Every survey has shown that the main issues are unemployment and farm distress. Another issue is the economy. Modi has jammed the economy and we are using NYAY to rev it up. Modi’s lies are also an issue.”

On Modi’s purported lies, Rahul has written in the foreword to the manifesto: “The harshest blow is that our citizens have lost their faith in the words of the Prime Minister and his government. He has given us grandiose promises, empty slogans, failed programmes, false statistics and an overall climate of fear, intimidation and hatred.”

The Congress president told reporters that his party would present a report to the people every year on the status of implementation of the promises made in the manifesto.

Sticking to his guns despite repeated queries about Modi’s attempts to raise Hindu-Muslim issues and his efforts to milk the post-Pulwama air strike in Pakistan’s Balakot, Rahul said: “Modi is scared of real issues. He wants to hide. I am repeatedly challenging him to debate any issue but he runs away. The country is talking about jobs, agriculture, economy. The jammed economy needs shock therapy. (The 100-day rural job scheme) MGNREGA fired up the economy during UPA rule. NYAY will do the same.”

Rahul said the five “big ideas” revolved around NYAY, jobs, farmers, health-education and national security. Aware that questions will arise about viability, he said: “I told the think-tank, the contents of the manifesto have to be truthful, I don’t want a single lie.”

“Modi promised Rs 15 lakh in every account (before the 2014 polls). That was a lie. We are promising Rs 72,000 to every poor family every year. We will deliver that. Gareebi par vaar, bahattar hazar (the scheme will be a strike on poverty). This will empower people and jumpstart the economy,” Rahul said.

The Congress leader refused to get into any debate on the possibility of his becoming the next Prime Minister, saying it was for the people, not him, to decide.

Asked about the Left’s anger at his decision to contest from Wayanad in Kerala in addition to Amethi in Uttar Pradesh, Rahul said the move was aimed at countering Modi’s “hostility” towards south India.

“There was a demand for me. There is a feeling in the south that they are not carried (along) by this government. The south feels hostility from Modi, that they are not included in decision-making. I am going there with a message that I am standing with you,” the Congress leader said.

He avoided locking horns with the Left, in power in Kerala, and said the Congress was very flexible and accommodative on the question of alliances.

As Rahul didn’t want the manifesto to be prepared by in-house experts behind closed doors, the Congress had reached out to people across the country and outside, holding 121 public consultations and 53 meetings with domain experts over 60 locations in India and one interaction in Dubai with NRIs from 12 countries.

The comprehensive document deals with a wide range of subjects — from governance to economic and social reforms, from foreign policy to sports and LGBT rights.