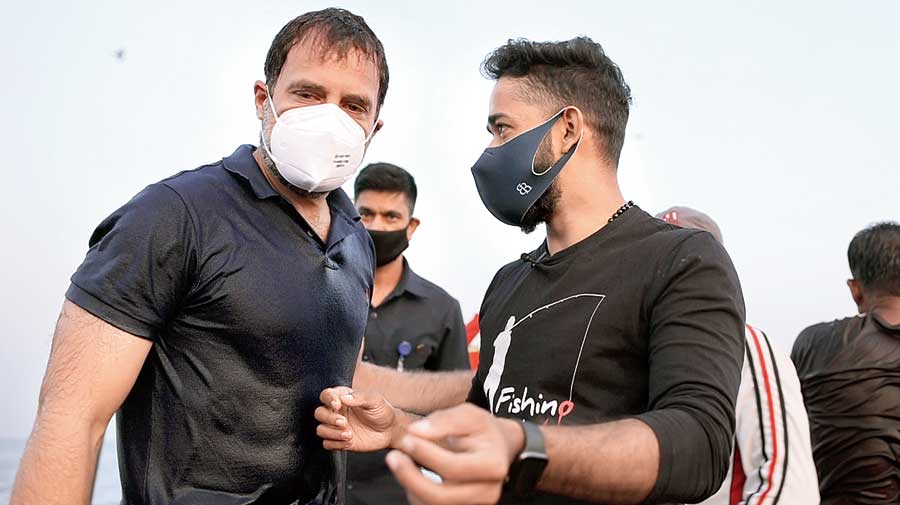 Sebin Cyriac is one of Kerala’s most popular fishing vloggers, is an expert swimmer and diver himself but would think twice before jumping into mid sea. Early morning on Wednesday, he met a certified divemaster and one-time scuba diving instructor who thought nothing about plunging into the sea in his khakis and T-shirt several kilometres from the shore and take to the water like a fish.

Except that the man in question is Rahul Gandhi.

“I am a swimmer and can dive up to about 10 metres. But even I am scared of diving in such deep waters. He made it appear routine and didn’t create any fuss. He just handed over his mobile phone to a fisherman who was seated next to him, removed his mask, got up and leapt into the cold waters around 6.30am,” Cyriac told The Telegraph on Friday.

It was a once-in-a-lifetime opportunity for the popular fishing vlogger when he got a call from Delhi to accompany the Congress leader on a fishing expedition off the Kerala coast. Many surprises were lurking in the blue waters of the Arabian Sea for Cyriac, his two colleagues and the 25 fishermen on board the mother ship and two assisting vessels.

Cyriac, 29, said he did not expect the expedition to be so smooth in spite of the fact that his assignment was to guide a political VVIP. “He made all of us, including the fishermen, feel comfortable and allowed us to do our work. One of the most remarkable things was the way he listened to everyone and asked pertinent questions to know more about fishing and its challenges,” Cyriac said.

His latest, and perhaps the most important vlog of his career, “Deep sea fishing with Rahul Gandhi”, was uploaded on YouTube on Thursday evening and had garnered over 1 million views by Friday afternoon.

Cyriac said he believed Rahul’s office picked him due to the popularity of his vlog — Fishing Freaks — which has 1.6 million subscribers on YouTube.

Cyriac, who took to professional vlogging more than two years ago, was accompanied by his two colleagues to handle five cameras including a drone that captured every moment of the three-hour expedition that started at the Thangassery fishing harbour in Kollam at 5am on Wednesday.

“None of the fishermen or the boat owners had been told who was coming on board. And when they got to see Rahul Gandhi I could see the excitement on their faces,” recalled Cyriac, who also acted as the interpreter between the crew and the Congress MP from Wayanad.

For those unflustered by the TV cacophony and smear campaign against Rahul, the video offered a peek into what made the politician with an unflinching resolve and steely calm that enables him to speak up without fear.

Rahul first boarded one of the two assisting vessels and later switched to the mother boat carrying the giant fishing net all ready to be cast once the sonar picks a shoal. But what shocked and surprised even the seasoned fishermen was when Rahul dived into the sea several kilometres from the shore.

“We had never expected him to dive into the sea. But after the net was cast, one fisherman had dived for a routine exercise to guide the shoal into the net,” Cyriac said.

On learning why a fisherman had to dive after casting the net, Rahul asked if he could follow him. “It all happened in a jiffy and only a few of us sitting close to him could hear the conversation due to the loud noise of the outboard engines. So when he got up and jumped into the deep waters, the rest of the fisherman got shocked.”

They had apparently not heard when Rahul told Cyriac that he was a certified divemaster who used to dive 38 metres deep and once taught scuba diving. “So I told them it was okay since he is an excellent swimmer,” Cyriac said.

The 23-minute-42-second video shows a smiling Rahul holding the hand of a fisherman and jumping into the sea. Voices can be heard in the background saying “Oh my God”. Some from the boat called out to Rahul not to venture further as he swam gracefully away from the boat.

The two armed bodyguards accompanying Rahul on the boat were unperturbed, perhaps because they knew he could swim well.

After around 10 minutes, Rahul, floating with ease, returned to the mother boat with the other fishermen.

“Since the diving part was unscheduled, he didn’t have a change of clothes. Only when a fisherman handed over his towel did he wipe his head,” Cyriac said.

Once back on board it was time to haul up the net. “He (Rahul) stood up with the fishermen and hauled the whole net weighing 2.5 tonnes without even flinching. I could see a few fishermen feeling the fatigue, but not him,” Cyriac said.

When he was not swimming or hauling the net, Rahul engaged in conversation with the fishermen and had breakfast comprising bread and fish curry cooked on board. This was the first time he was having fish for breakfast and he usually has only coffee in the morning, Rahul revealed.

Rahul back at the boat after swimming with fishermen
Picture courtsey: Fishing Freaks

Rahul said he had come for a first-hand experience as he had heard about the difficult life of fishermen.

Cyriac rubbished trolls from the CPM and the BJP that called the expedition a paid publicity stunt.

“Let me make it very clear. It was not a paid assignment. I accepted it since it was a great opportunity for me. I refused umpteen offers from advertisers who saw the video since this is more than just making some money by selling advertisement space,” he said.

On allegations raised by a CPM organ about the crew carrying fish from the shore, Cyriac said there was nothing unusual about it.

“I have been on fishing expeditions many times and I have seen fishermen carrying fish from the shore before they set out. They immediately start cooking fish curry and by the time the boat reaches the fishing spot (45 minutes to an hour away) the breakfast is ready,” he said.

“Since they embark on the trip before dawn they would have had only tea. The breakfast is always cooked on board and had either before or soon after casting the net. That’s exactly what happened on that day as well.”

“Very often fishermen return to the shore with hardly anything. So on that day they could get just one squid,” Cyriac said, alluding to the catch.

Addressing fishermen later that day, Rahul had recounted the experience and said they could catch only one squid after all the hard work.