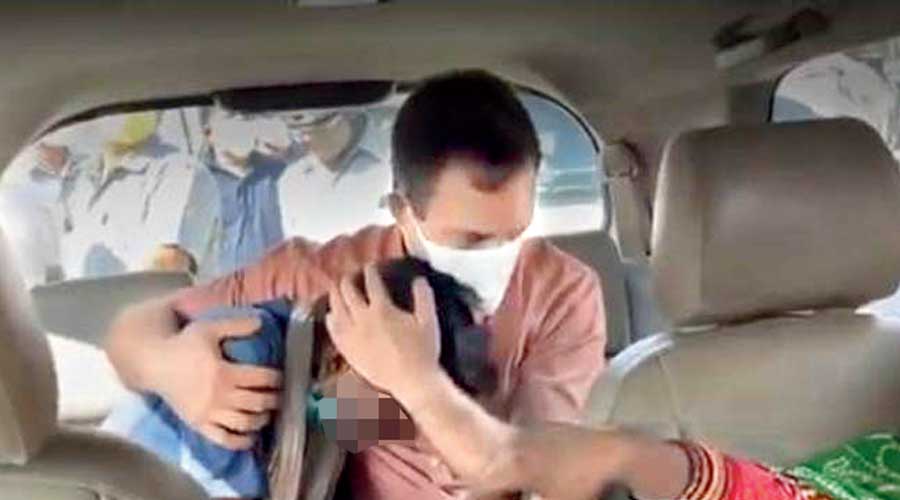 Rahul Gandhi on Wednesday flagged the rape and murder of a nine-year-old Dalit girl in Delhi, trying to jolt the nation’s conscience at a time its women’s successes in the Olympics have encouraged a self-congratulatory narrative about women’s empowerment.

The rag-picker’s daughter who had gone to a crematorium near her home to fetch drinking water was allegedly raped by the facility’s priest along with three of his friends on Sunday evening.

She was then allegedly murdered and her body burnt, but the police are accused of trying to hush up the atrocity that the intervention of activists and local Congress functionaries brought to light.

Delhi, which had erupted over the death of the December 2012 bus gang-rape victim nine years ago, has largely remained indifferent.

Central and state government authorities did not express even the customary condolences till chief minister Arvind Kejriwal woke up on Tuesday and tweeted his shock at the crime after the Delhi Congress chief visited the girl’s family.

Kejriwal paid the family a visit on Wednesday after Rahul’s drew national attention.

Rahul, who had on Tuesday tweeted that “A Dalit’s daughter too is a daughter of the nation”, arrived at her village, Nangal, on Wednesday morning to console her parents.

After Rahul spoke to them in the presence of activists and local people, the mother said she would not be able to narrate everything in front of the crowd. Rahul took the parents into his car and heard them in private.

Asked about the incident later, he told reporters: “I only know that my job is to help them.”

Rahul and Priyanka had last year visited Hathras in Uttar Pradesh despite stiff resistance from the administration to express solidarity with the family of another Dalit rape-and-murder victim whose body the police had burnt without the parents’ consent.

“The Delhi incident is painful and condemnable. Imagine what her family must be going through,” Priyanka has tweeted.

“The home minister (Amit Shah), who is responsible for law and order in Delhi, had gone to distribute certificates (of good governance) in Uttar Pradesh. But he can’t fulfil his own responsibilities. From Hathras to Nangal: There is jungle raj.”

While Prime Minister Narendra Modi has tweeted on Indian sportswomen winning medals at the Olympics, neither he nor any other Union minister had commented on the Nangal atrocity till Wednesday evening.

Even women and child development minister Smriti Irani, who attended an event on Sunday to celebrate the second anniversary of the enactment of the triple talaq law — a milestone in the RSS-BJP’s perception of women’s empowerment — has remained mum on the Dalit girl’s rape and murder.

Shaktisinh Gohil, the Congress’s minder for Delhi, said: “Crime against women has become routine. After killing this girl, the culprits tried to hush up the matter, offered money to the mother. The police took the mother into custody. The FIR was filed only when some local Congress leaders and activists created pressure.”

Delhi Congress chief Anil Chowdhary said: “They tried to pass the murder off as an accidental death from an electrical shock. There are allegations against the priest of similar crimes but the police didn’t act.”

He added: “The Prime Minister gave us hollow slogans but did nothing about crimes against women. There have been 15,000 rapes in Delhi since 2014. We want adequate financial assistance to the family.”

Kejriwal has now announced an assistance of Rs 10 lakh to the family.