Under public pressure, the police have arrested four men — a crematorium priest and three others 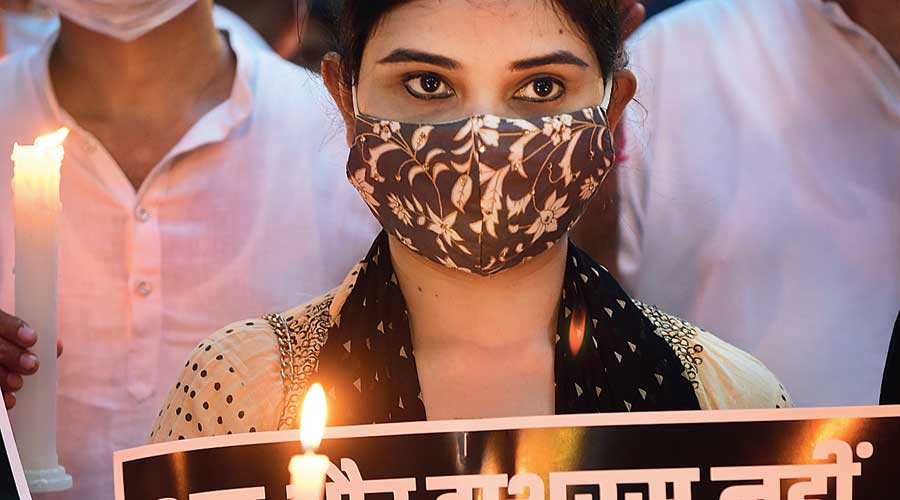 An Indian Youth Congress activist at a candlelight march in New Delhi on Wednesday to demand justice for the girl.
PTI
Our Special Correspondent   |   New Delhi   |   Published 05.08.21, 01:11 AM

The alleged rape and murder of a nine-year-old Dalit girl on Sunday, followed by Dalit demonstrations at a village near Delhi Cantonment, has triggered protests against the BJP-led central government that supervises Delhi police.

Under public pressure, the police have arrested four men — a crematorium priest and three others — on charges that include rape and murder. The girl’s parents have alleged she was cremated without their consent.

The BJP has attacked Rahul Gandhi for meeting the girl’s parents, and the National Commission for the Protection of Child Rights (NCPCR) has asked Twitter to remove a tweet by Rahul showing him with the parents as it violates the norm against revelation of the victim’s identity.

However, photographs of the parents of the December 2012 gang rape and murder victim meeting political leaders, including Prime Minister Narendra Modi and others from the BJP, have frequently been published in the past.

Trinamul MPs Kakoli Ghosh Dastidar, Shanta Chhetri and Mausam Noor have visited the spot where the nine-year-old was allegedly murdered, and the Left parties and their mass organisations protested in the capital.

The Congress held candlelight marches in each of Delhi’s 70 Assembly constituencies on Wednesday.

DCP (Southwest) Ingit Pratap Singh has said the girl went to the crematorium around 5.30pm on Sunday to get cold water from the cooler.

“At 1800 hrs the priest of crematorium Pandit Radhey Shyam and two-three other persons known to the mother... called her to crematorium and showed dead body of girl stating that she got electrocuted while having water from water cooler, and that there were burn marks between left wrist and elbow of girl, also her lips were blue. This was seen by the mother,” Singh said.

Singh said Shyam and the co-accused told the mother that if she called the police, “in post-mortem doctors will steal all organs of the girl and so it’s better to cremate her. The girl was cremated”.

After the parents protested, the police stopped the cremation and detained Shyam, but only the child’s legs could be retrieved.

On Tuesday, Bhim Army leader Chandrashekhar Azad and AAP legislator Rakhi Birla led a sit-in at the village. The girl’s mother claimed she and her husband had been held at Delhi Cantonment police station for several hours on Sunday, and that the police did not protect her husband from being assaulted there by an unidentified man who was not wearing a uniform. The police have denied the charges.