The AIADMK, after the demise of former Tamil Nadu chief minister Jayalalithaa, has been accused of acting like the BJP’s puppet 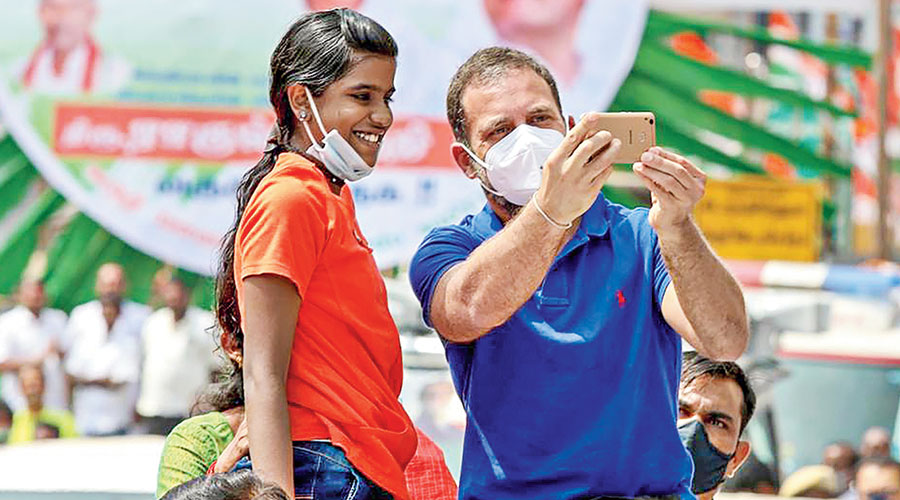 Rahul Gandhi on Monday hinted at a deal between Tamil Nadu chief minister E.K. Palaniswami and Prime Minister Narendra Modi that ensured stopping of investigations in corruption cases whereas Opposition leaders were being targeted across the country.

This charge, of Modi possessing the remote control of the Tamil Nadu government, evoked thunderous applause as the AIADMK, after the demise of former chief minister Jayalalithaa, has been accused of acting like the BJP’s puppet. Amidst lusty cheering, Rahul said: “Modi feels that he controls the people of Tamil Nadu because he controls the government. Modi cannot control you just because your chief minister is corrupt. The people of Tamil Nadu are going to remove the batteries of the remote control and throw it away.”

Tamil Nadu will go to polls in a few months along with Assam, Bengal, Kerala and Puducherry.

Rahul, who completed his three-day tour of the state on Monday evening, his second in a fortnight, has been trying to make Tamil identity the central theme of his discourse, accusing the RSS-BJP of conspiring to impose one-language, one-culture on the entire country.

He repeatedly argued that the government will have to deal with states such as Tamil Nadu, Bengal or Punjab with respect and affection instead of imposing a unified culture on them.

At another function in Karur district, Rahul asked the farmers if anybody knew the details of the new farm laws. To his delight, one farmer bitterly complained about contract farming and removal of stock limit by amending the Essential Commodities Act and wondered how they  would bargain with a big player like Adani instead of dealing with the so-called middlemen and commission agents who are from their own community. This farmer also wondered how a law can be framed which prevents farmers from approaching the court in case of a dispute.

This is the same language that is being spoken at the farmers’ protest going on outside Delhi’s borders, exploding the false propaganda of the Modi government that only farmers from Punjab and Haryana were angry.

This farmer also explained how sugar mills were refusing to pay despite entering into a contract, compelling Rahul to say: “He will make a better agriculture minister than the current one in the Modi government.”

Agriculture minister Narendra Tomar, who steamrolled similar objections from the Opposition in Parliament, including the horrendous clause that farmers can’t approach the court for redress of grievances in case of a dispute with the corporate entity, finally agreed to make amends under pressure from protesting farmers. Both the Opposition and the farmers have accused the government of framing the laws without application of mind or with the ill-intent to help in the corporate takeover of agriculture.

While other farmers also expressed their anguish — from poor quality of seeds to inadequate marketing facilities and prices — there were complaints about intrusion of corporate players, falling incomes and even unauthorised selling of farming data to multinationals by the government.

Rahul described the farm laws as “criminal” — intended to break the backbone of India by weakening the farmers and workers — and argued that the government was trying to impose a failed economic model borrowed from America.

The Congress leader also probed the people’s mind on demonetisation, asking women whether they liked banning of currency notes or not. That question triggered angry responses with people narrating how demonetisation destroyed lives and livelihood across the state. This allowed Rahul to repeat his pet theme — that Modi is by design attacking the foundations of India to facilitate control by five-six big industrialists and exhorted everybody to join hands to thwart this sinister plot.