Contrary to teachings of social reformers, the right-wing party is spreading violence, hatred and anger, which is dividing and weakening the country, says the Congress leader 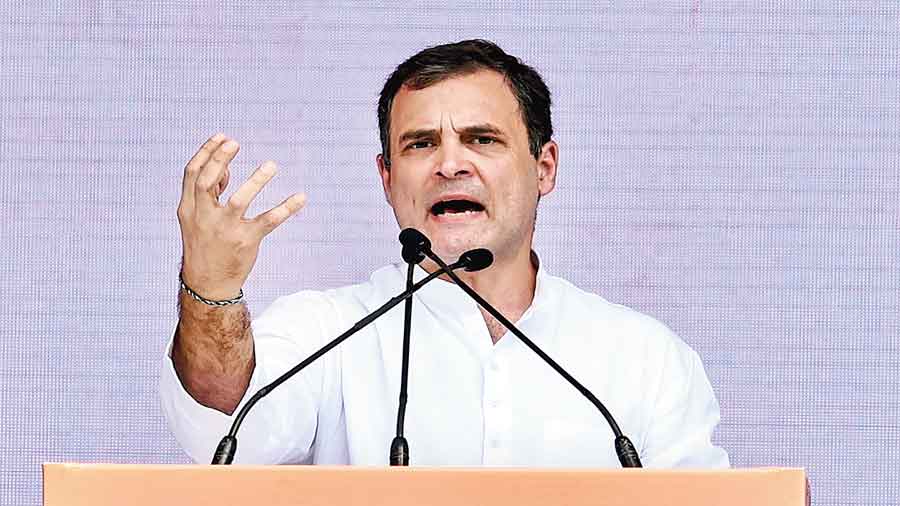 Congress leader Rahul Gandhi on Wednesday continued his attack on BJP and RSS, alleging that they are spreading violence, hatred and anger in the country which was contrary to the teachings of renowned social reformers like Sree Narayana Guru.

At the end of the fourth day of the Kerala leg of the Bharat Jodo Yatra, which completed 150 kilometres as it marched into Kollam district of the state, Gandhi said that social reformers like Sree Narayana Guru, Ayyankali and Chattampi Swamikal did not preach violence, hatred or anger.

However, "the BJP and RSS ideology is one of hatred and anger which was dividing and weakening the country," he said.

"They are taking away India's biggest strengths of respect for one another's ideas, tolerance, affection even for our opponents and non-violence. Mahatma Gandhi used non-violence to defeat a super power."

"Today our true strengths are being weakened by the ideology of BJP and RSS," Gandhi, also the MP from Wayanad, said while addressing a huge turnout of people near Pallimukku junction in Kollam.

Gandhi has been attacking the BJP and RSS and their ideology during the Kerala leg of the 3,570 kilometres and 150-day long yatra which started off from Kanyakumari in Tamil Nadu and will conclude at Jammu and Kashmir.

During the break between the two phases of the day's march at Kollam, he met with people from various strata of society, auto-rickshaw drivers and representatives of the cashew farmers, as well as students.

Tweeting about his experiences during the interactions, he said, "The purpose of #BharatJodoYatra is to connect with people across India, especially the underprivileged. We are here to listen to their concerns. I was overwhelmed by the love and adulation I receive at the Parayil village this morning, but equally pained to witness their struggles."

"Nevertheless, their smiles give me hope and their aspirations give me strength to work harder towards making India an abode of their dreams," he said.

After meeting some auto-rickshaw drivers, Rahul tweeted, "Those who used to earn Rs 500 a day, are now earning Rs 300. In this back-breaking inflation, it is difficult to take care of their children's education and run the family."

"In these difficult situations, I stand with my auto driver brothers and will continue to raise my voice against inflation."

With regard to his interaction with cashew farmers representatives, he said that they are struggling and they cannot expect a bright future in a country which is divided.

The Wayanad MP also said that each day of the yatra here has given me a deeper insight into the inclusive spirit of Kerala.

Jairam Ramesh, AICC general secretary in-charge of communications, also tweeted about Gandhi's interactions, the second phase of the march as well as the "massive" turnout in the evening and also shared photographs of the same.

He also said that the yatris, including Gandhi, would be resting on Thursday and the yatra would resume on September 16.

"150 kms completed so far. Today afternoon, @RahulGandhi interacted with students at Chathannoor in Kollam district. Evening padayatra saw massive crowds. Tomorrow is a well-earned rest day for all and the padayatra resumes the day after from Kollam," he tweeted.

Rahul started the yatra on a spiritual note in the morning by paying his respects to renowned philosopher and social reformer Sree Narayana Guru at Sivagiri Mutt here.

At Sivagiri Mutt, Rahul met the swamis there and offered prayers to the saint reformer.

After meeting him, one of the swamis told the media that they were happy he arrived there uninvited.

He also said that they informed him that while the Ezhava community in Kerala had a strength of 28 per cent, they only had one MLA in Congress.

We expect he will consider the issue sympathetically, the swami said.

On Tuesday, after that day's yatra ended at Kallambalam junction here, Gandhi attacked the BJP by questioning how a party which calls itself a representative of Hindus was allegedly spreading 'ashanti' in the country when the first words taught in Hinduism is 'om shanti'.

The foot march will cover 12 states and two Union territories.

The Bharat Jodo Yatra, which entered Kerala on September 10 evening, will traverse through the state covering 450 kilometres, touching seven districts over a period of 19 days before entering Karnataka on October 1.

I-cards for all PCC delegates