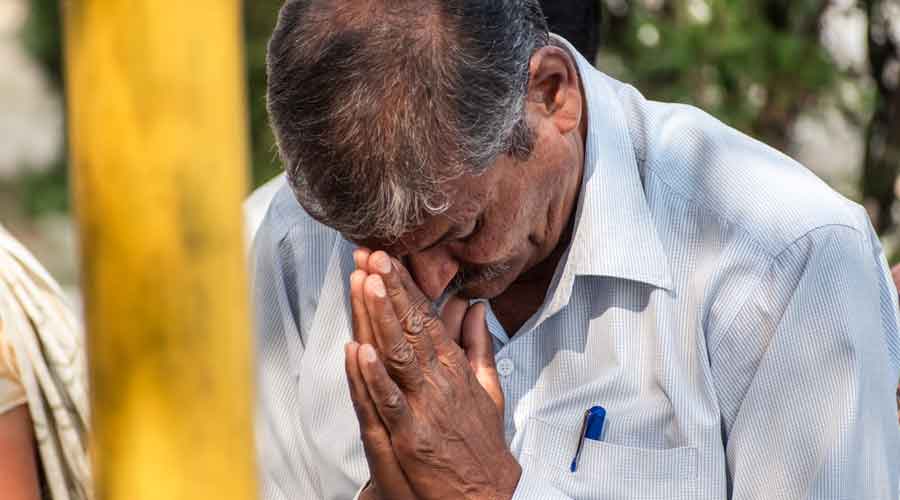 Upper caste people in a Puri village have drawn a line on the premises of a temple and forbidden Dalits from crossing it in yet another instance of caste atrocity that researchers and activists say has been exacerbated by State apathy to stamp out the social evil.

The three Dalit families of Tinikudi village in Odisha have been told not to breach the line, which is far from the sanctum sanctorum of Hatakeswar Shiv temple. Harekrushna Mallick, one of the Dalits, alleged that they had been complaining to police for months but to no avail, and that villagers had assaulted them for seeking help.

Earlier, these families were able to walk to a point from where the priest was visible, but the line was drawn nine months ago. Tinikudi has 150 families belonging to the dominant peasant castes.

Mallick, an elected member of the Puri zilla parishad and also part of the district vigilance monitoring committee on cases related to Scheduled Castes (SC) and Scheduled Tribes (ST), said he had approached the police on a number of occasions.

“The police did not register an FIR and asked the two groups to discuss and amicably sort out the matter. A meeting was held but the villagers did not agree to withdraw their restrictions. We have been seeking police help in vain all these months,” Mallick said.

“We had requested the police for protection. But they came only after we had been attacked,” he said.

The inspector-in-charge of Puri Sadar police station, Sumati Mohanty, said an FIR had been filed under the SC-ST (Prevention of Atrocities) Act and an investigation was on. No arrest has been made yet.

Kelucharan Baral, a villager, claimed the Dalits had not been attacked, but defended the decision to draw a line at the temple.

“It is not a government temple. It is a private temple managed by us. We have engaged a priest. We have allowed the Dalits up to a particular point. They should follow that,” Baral said.

Social activists said caste-based crimes without the fear of the law had become common across the country and that the police generally did not act on complaints.

In 2015, Parliament amended the SC-ST (Prevention of Atrocities) Act, 1989, to provide for immediate arrest of the accused, the filing of a chargesheet within 60 days of the lodging of a case and the conduct of the trial within the next 60 days in exclusive special courts. The amendments also provided for the compensation of victims.

Rahul Singh, general secretary of the National Dalit Movement for Justice (NDMJ), a civil society group fighting for SCs and STs, said the police machinery was dominated by people from the privileged castes and they usually tried to brush caste atrocities under the carpet.

“As per the law, police officers should not suggest mutual settlement. They should lodge an FIR and take immediate action. But the police put pressure for amicable settlement. The settlement reached through discussions always favours the accused as such meetings are dominated by people from the privileged castes,” Singh said.

Data from the National Crime Records Bureau (NCRB) compiled during a study by the NDMJ show a steady rise in the number of cases of caste atrocities despite alleged police attempts to discourage the filing of FIRs.

In 2018, the country witnessed 42,793 registered cases of atrocities against Dalits. The number increased to 45,935 in 2019, according to the NCRB. The police have often been accused of delaying the investigation and the filing of the chargesheet.

“The State as an entity is embedded in the atrocities against Dalits. There is an attempt to not register cases. Once registered, the police will delay arrest and filing of the chargesheet. The hearings will be delayed. At every level, there is an attempt to defuse the cases,” Singh said.