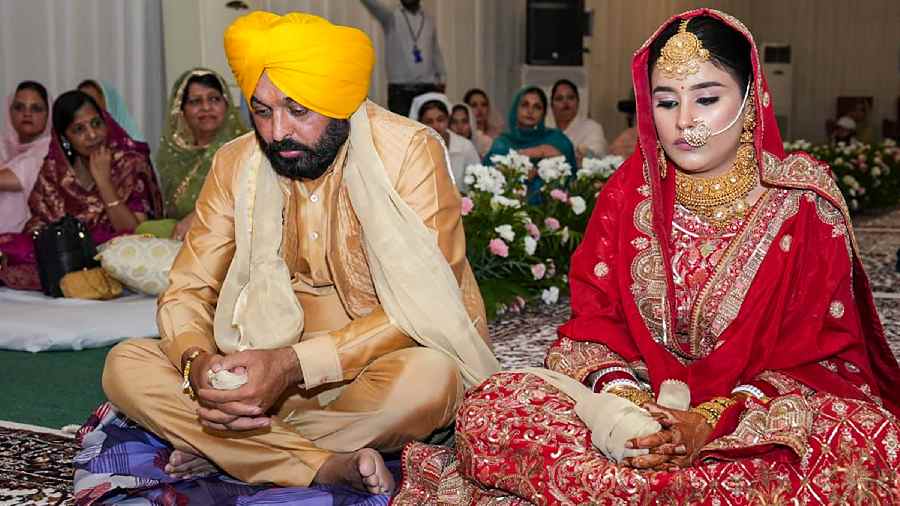 The nuptials took place at a Gurdwara, as per the traditional Anand Karaj, in accordance with Sikh customs.

AAP MP Raghav Chaddha, who also joined the festivities, tweeted pictures of the ceremony. "I have come here with my mother...I wholeheartedly congratulate Mann Sahab and his family on this special occasion," he said.

Tight security arrangements were in place at the residence of the chief minister in Chandigarh ahead of the 48-year-old Mann's marriage to Dr Gurpreet Kaur, who belongs to Pehowa in Haryana's Kurukshetra.

Gurpreet Kaur (30), shared a picture of herself on Twitter and wrote, “Din Shagna Da Chadya” (the day of marriage has arrived). She also thanked the Aam Aadmi Party (AAP) leaders for their congratulatory messages.

The families of Bhagwant Mann and Dr Gurpreet Kaur did not make the news of their upcoming marriage public till Wednesday, July 6. Even their relationship was kept carefully under wraps.

This is Mann's second marriage. He had separated from his first wife in 2015 and has two children -- daughter Seerat Kaur (21) and son Dilshan (17) -- from his first marriage.