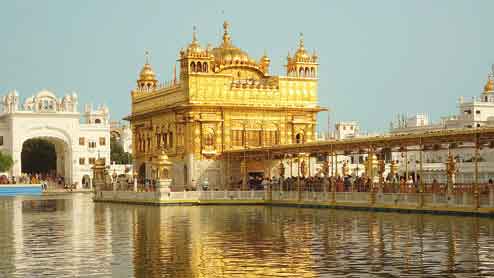 A day after a man was killed for an alleged sacrilege bid at the Golden Temple in Amritsar, another unidentified person was beaten to death by a mob after being accused of "disrespecting" the Sikh religious flag at a gurdwara in Nizampur village on Sunday morning. Meanwhile, the state government has formed an SIT under the deputy commissioner of police (law and order), which would submit its report on the Golden Temple incident in two days.

Villagers and members of Sikh organisations clashed with the police personnel who tried to save the man, leaving three cops including a station house officer injured.

Police said there was "no visible sign" of sacrilege incident having taken place at the gurdwara, which is located on the Kapurthala-Subhnapur road here.

The gurdwara manager, Amarjit Singh, claimed that he saw the man, who appeared to be a migrant labourer, trying to disrespect the 'Nishan Sahib' (religious flag) early morning after he came out for daily prayers. He claimed that the man fled but he was caught by the gurdwara 'sewadars' (workers) after a chase.

Singh then went live on his Facebook page and made these claims while the police stated that he was trying to give an impression of the sacrilege attempt.

However, according to the police, the unidentified man was eating chappatis in the kitchen located on the ground floor of the Gurdwara complex. He ran away when a 'sewadar' spotted him, they said.

After getting information about the incident, the police rushed to the gurdwara where the man, who was in his twenties, was kept in the room.

Villagers and members of Sikh organisations also assembled at the gurdwara complex and did not allow the police to take the man to the police station.

Carrying some swords and 'lathis', they forcibly entered the room and even scuffled with the cops.

Then they badly thrashed the man, said the police, adding that he was brought in a critically injured condition to the local civil hospital where the doctors declared him "brought dead".

Later talking to reporters, Inspector General of police Gurinder Singh Dhillon said there is no visible event of sacrilege at the gurdwara.

Everything was found intact including the holy Guru Granth Sahib, he stated.

Senior Superintendent of Police Harkamalpreet Singh Khakh said the man had the intention of committing a theft in the gurdwara.

On the allegation of disrespecting the Nishan Sahib, Dhillon said there was also no visible sign of any act of sacrilege even to the Nishan Sahib but, we are verifying the facts, as claimed by the complainant.

A case under section 295-A (hurting religious sentiments of people) of the IPC on the statement of Gurdwara manager Amarjit Singh has been registered, said Dhillon.

He further said that three cops including a station house officer were injured when they were trying to save the man from the unruly mob.

The incident came a day after an unidentified man was beaten to death after he allegedly attempted to commit sacrilege inside the sanctum sanctorum of the Golden Temple in Amritsar on Saturday evening.

Punjab CM Charanjit Singh Channi visited the Golden Temple on Sunday and said some "inimical" forces may be involved in the alleged sacrilege in view of the upcoming Assembly polls. But they will be exposed, said the CM as he urged people to maintain calm.

The state government has constituted a Special Investigation Team (SIT) to probe the Golden Temple incident. Channi told reporters that in view of the upcoming Assembly polls in the state, some "inimical" forces or agencies may be involved in the incident.

"I appeal to the Sangat that they should pay special attention to take care of religious places temples and gurdwaras--and institutions of all religions. People should maintain peace and mutual brotherhood, said Channi. The CM said he was deeply hurt by the alleged sacrilege attempt, which was unfortunate and needed to be condemned.

If anyone has come with wrong intention, our intelligence agencies will try to nab and expose them, he said. "We will go to the bottom of the incident," he added.

Earlier in the day, Randhawa held a meeting in Amritsar with the police commissioner and other officials.

The accused spent a few hours at the "Parikarma" of the holiest shrine of Sikhs, Randhawa said, adding that he was "here with an aim".

A case was registered against the unidentified man late on Saturday night under IPC Sections 295A (deliberate and malicious acts, intended to outrage religious feelings of any class by insulting its religion or religious beliefs) and 307 (attempt to murder), Amritsar Police Commissioner Sukchain Singh Gill said.

He said a footage obtained from cameras at the Golden Temple is being examined to collect information about the accused.