Massive traffic snarls were witnessed around the national capital on Thursday even as he Delhi-Gurgaon border was shut with the authorities erecting barricades on an arterial highway in the run up to scheduled protests against the Citizenship (Amendment) Act, 2019 (CAA).

'Traffic was fine in the morning... The blocks seem to have been put up around 10am,' said a transport manager of a Gurgaon-based company, adding, 'the company cabs that were to arrive at 10am have not arrived yet.'

Meanwhile, historian Ram Chandra Guha among others were detained in Bengaluru for staging a protest against the amended citizenship law.

Gugraon traffic police issued an advisory to avoid 'non-essential' travel to New Delhi as NH48, MG road and Old Delhi-Gurugram have been sealed.

Section 144 has been clamped in parts of the national capital in view of two major rallies in the city against the CAA and the recent police crackdown against Jamia Millia Islamia University students.

A large number of students, including those from JNU, DU, and Jamia, as well as individuals form different walks of life, took out a march near the Red Fort, in defiance of the restrictions in the area.

Left parties were holding a march at Mandi House in Central Delhi.

Barricades have been erected in large part of south, east and north Delhi to check movement of protesters, triggering massive traffic snarls in large parts of the city.

As the protesters were not allowed to proceed to venue of the protests, small demonstrations were held in several areas including Rajghat, Shantivan, Daryaganj and the area near Inter State Bus Terminal in Kashmiri Gate.

Later, a large number of protestors gathered at the Jantar Mantar after they were not allowed to demonstrate near the Red Fort and Mandi House where prohibitory orders have been imposed.

As protestors started converging at the Jantar Mantar amid heavy deployment of security personnel, barricades were erected at the protest site to prevent them from moving further.

Senior police officials have appealed to students and activists to maintain peace. Police have also stationed water canons at the Jantar Mantar to deal with any situation.

Scores of agitators were detained at the Red Fort where another protest by students and activists was set to begin.

'I have just been detained from Lal Qila. About a thousand protesters already detained. Thousands on the way,' Yadav tweeted. 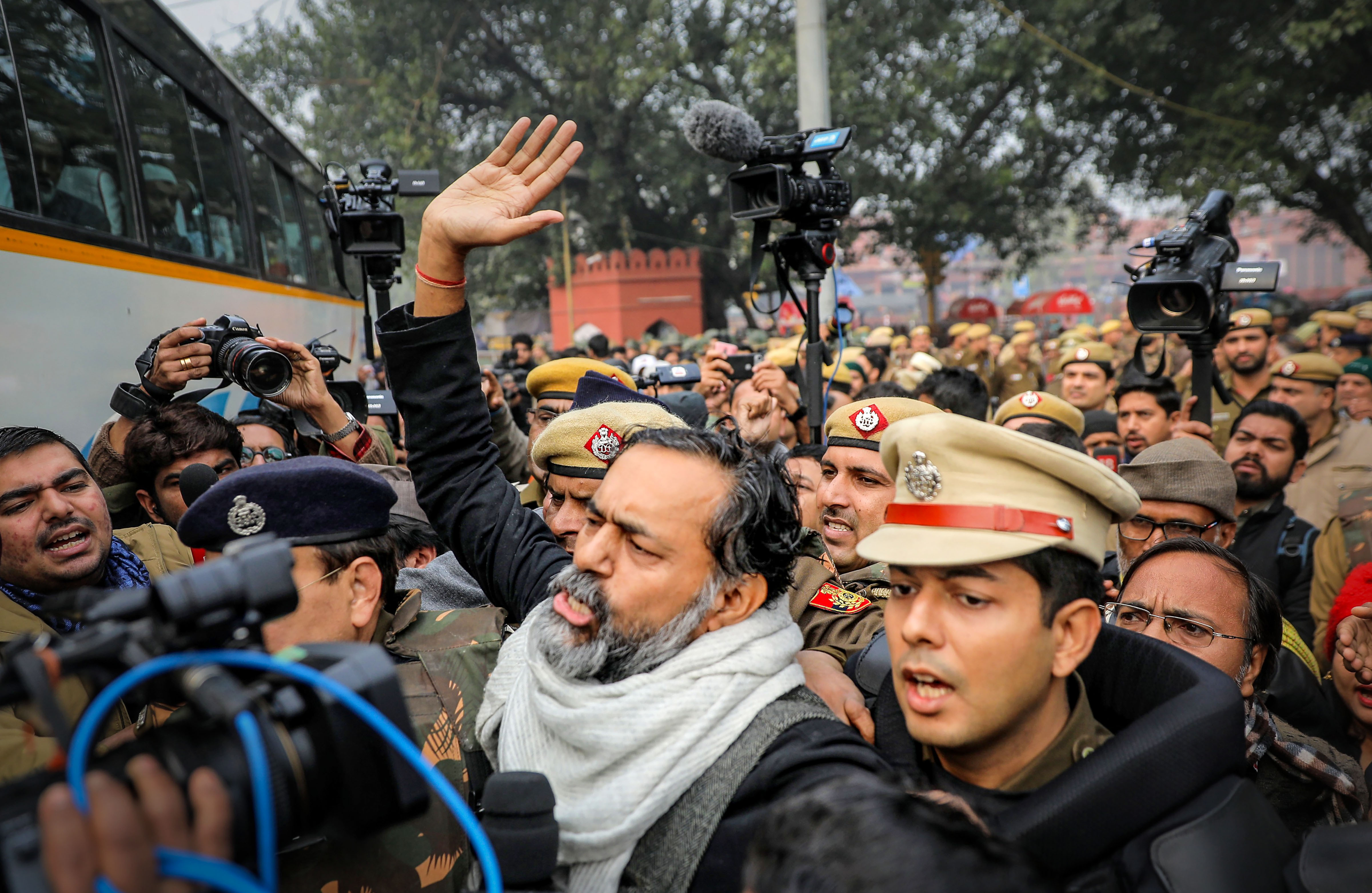 Swaraj Abhiyan founder and activist Yogendra Yadav is detained by police for defying prohibitory orders imposed by the Delhi police in the area during an anti-Citizenship Act protest, at Red Fort, in New Delhi, Thursday, December 19, 2019.
PTI

I have just been detained from Lal Qila. About a thousand protesters already detained. Thousands on the way.
Am told we are being taken to Bawana.

The protesters, who were taken on a bus, were later dropped off in different parts of the city.

'We were detained and then taken in buses and dropped at different areas. I was dropped off near Karol Bagh while some others have been taken to Bawana,' Raja told PTI just after he was let off.

In light of the marches, 18 metro stations have been closed. These include Jamia Millia, Jama Masjid, Munirka, Patel Chowk, Lok Kalyan Marg, Udyog Bhawan, ITO, Pragati Maidan and Khan Market. Seven of these stations were closed in the morning, while seven others were shut down later.

The Delhi Metro Rail Corporation said although entry and exit at Central Secretariat and Mandi house metro stations were shut down, inter-connectivity services will remain functional.

Telecom operators have suspended internet, voice and messaging services in parts of Delhi-NCR following instructions from the police in the wake of protests.

As per the order, services were suspended for locations, including walled city areas of north and central districts, Mandi House, Seelampur, Jaffarbad, Mustafabad, Jamia Nagar, Shaheen Bagh and Bawana.

Telecom service providers including Airtel, Vodafone Idea and Reliance Jio barred the services to comply with the order.

'In view of the prevailing law and order situation, it is hereby directed that communication of all types i.e. voice, SMS and internet, be halted from 0900 hours to 1300 hours in Cell IDs/BTS (base transceiver stations) covering the following areas for 19-12-2019,' said the order issued by Deputy Commissioner of Police, Special Cell, New Delhi.

In Bengaluru, historian Ramachandra Guha and many others were detained on Thursday for staging a demonstration against the Citizenship Amendment Act and NRC at the Town Hall, in defiance of the prohibitory orders imposed in the city.

He was taken away by police personnel and led to a vehicle parked nearby. Police said the protesters violated prohibitory orders clamped in the city against any protest or demonstration. Reacting to his detention, Guha said it was “absolutely undemocratic” that police were not allowing even a peaceful protest, which is the democratic right of the citizens. 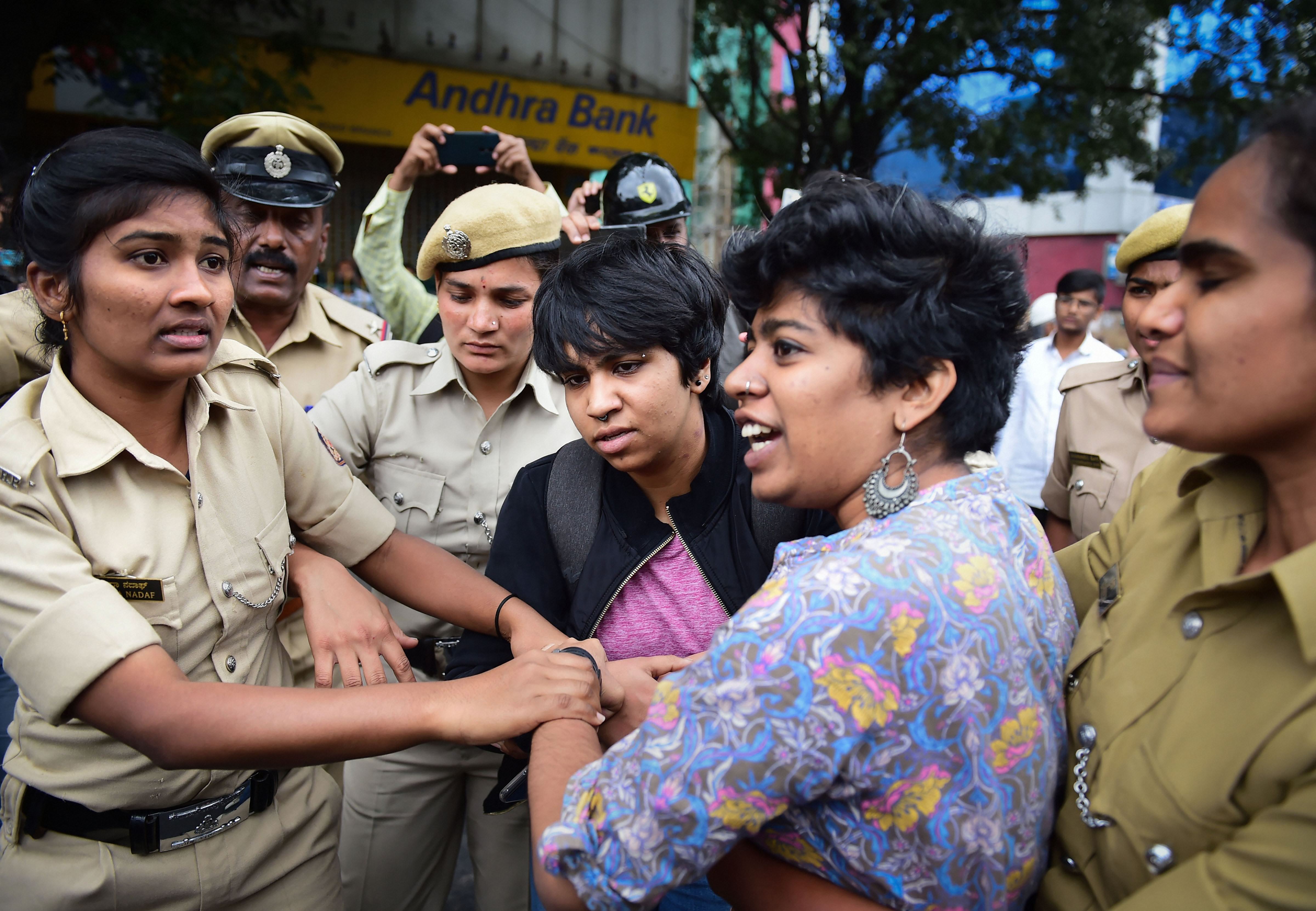 Protestors detained by police for defying prohibitory orders imposed in the area during an anti-Citizenship Act protest rally, in Bengaluru, Thursday, December 19, 2019.
PTI

The Communist Party of India too staged demonstrations in the city against the CAA and NRC.

India’s IT capital and its largest state were brought under prohibitory orders on Wednesday night ahead of nationwide protests called against the amended citizenship law on Thursday.

In Bangalore, Section 144 of the CrPC, which prevents assembly of four or more people, was imposed on Wednesday night. At least two other cities in Karnataka have been brought under the restrictions.

In Uttar Pradesh, the same section has been imposed in the entire state. Police have advised parents not to let their children take part in protests.

Both Karnataka and Uttar Pradesh are ruled by the BJP. The restrictions came less than 24 hours after Union home minister Amit Shah had claimed that the protests had been limited to just four universities in the country and “in a democracy, people have the right to protest”.

Before the orders were imposed, the Bangalore police chief had said sit-ins would be allowed but not marches.

The curbs in Bangalore came into force at 9pm on Wednesday and would continue to be in place till midnight on Saturday. Mangalore and Gulbarga in north Karnataka, which have a considerable Muslim population, are also under the ambit of the prohibitory spell.

Police said there would be no restrictions on schools, colleges, malls and public transport.