Jammu: Curfew in parts of Chenab valley, efforts on to defuse tension

Broadband and mobile internet services remained suspended in several areas, including Bhaderwah and Kishtwar towns, as a precautionary measure 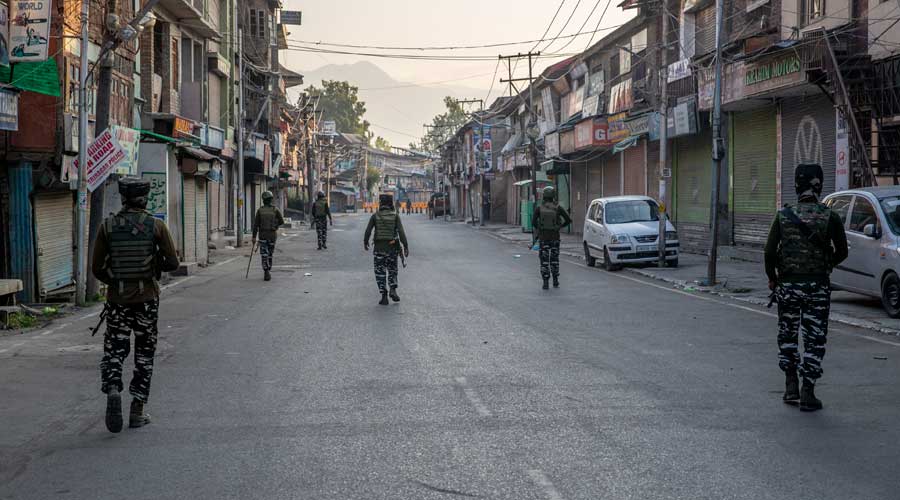 A curfew clamped in parts of Jammu's Chenab valley was in effect on Saturday, while a day-long shutdown called against recent remarks on Prophet Mohammad by two now-suspended BJP leaders disrupted life in the Peer Panchal region, officials said.

Even as efforts were intensified to defuse communal tension, prominent citizens from both the communities requested the government to take strict action against "mischievous elements" bent on disturbing peace.

Broadband and mobile internet services remained suspended in several areas, including Bhaderwah and Kishtwar towns, as a precautionary measure.

Tension had mounted in Bhaderwah township of Doda district and some areas of nearby Kishtwar and Ramban districts of Chenab valley region, prompting the authorities to impose restrictions under section 144 of the CrPC late Thursday evening.

A curfew was subsequently clamped in Bhaderwah and some other parts of Doda district along with Kishtwar town as a precautionary measure, the officials said, adding that barring a stone-pelting incident in Bhaderwah, there was no untoward incident reported from anywhere.

They said students appearing in the bi-annual Class 12 final examinations were allowed through the curfew-bound areas on furnishing their admit cards.

Deputy Inspector General of Police, Doda-Kishtwar-Ramban range, Sunil Gupta went round Bhaderwah town along with a contingent of police personnel and asked people to stay indoors.

A women personnel contingent was also deployed in the town, the officials said, adding that efforts were intensified to defuse the tension by encouraging meetings between senior citizens of the two communities.

One such meeting was held in Bhaderwah town under the chairmanship of District Development Council (DDC) chairman D S Kotwal, in which members of the Shri Sanatan Dharam Sabha and representatives of the Sarafa Jamia Masjid Committee participated and assured full cooperation to the administration in dealing with mischievous elements.

"The meeting was held in a cordial atmosphere, and the participants unanimously requested for stern action against mischievous elements bent upon disturbing peace," Jamia Masjid Committee president Imtiaz-ur-Rehman Bhat said.

Deputy president of Dharam Sabha Manoj Kotwal said some elements were misusing social media to drive a wedge between the two communities and this needs to be dealt with "iron hands".

"There are some elements who want disturbance. They should be identified and thrown in prison. We were looking forward for a good tourism season after three long years but all the efforts to revive tourism suffered a setback," he said.

Reports from the twin border districts of Rajouri and Poonch in Peer Panchal region of Jammu spoke of a peaceful shutdown as part of a protest against the recent remarks by the suspended BJP leaders.

The shutdown call was sounded by a body of Muslim preachers and supported by president of Sanatan Dharam Sabha, Mendhar, Balram Sharma.

The protests started in Bhaderwah town of Doda on Thursday when hundreds of people staged a sit-in against the remarks made by now-suspended BJP leaders Nupur Sharma and Naveen Jindal on Prophet Mohammad and the social media posts by right-wing activists in support of the BJP leaders.

After intense negotiations, the protestors agreed to clear the road and entered the neighbouring Jama Masjid. Purported video clips of the inflammatory speeches went viral on social media. The police have registered a case and warned people against taking the law into their own hands.

However, tension increased around midnight when two women, who came out of the mosque, claimed that they were roughed up by the security forces who were implementing the curfew in the town.