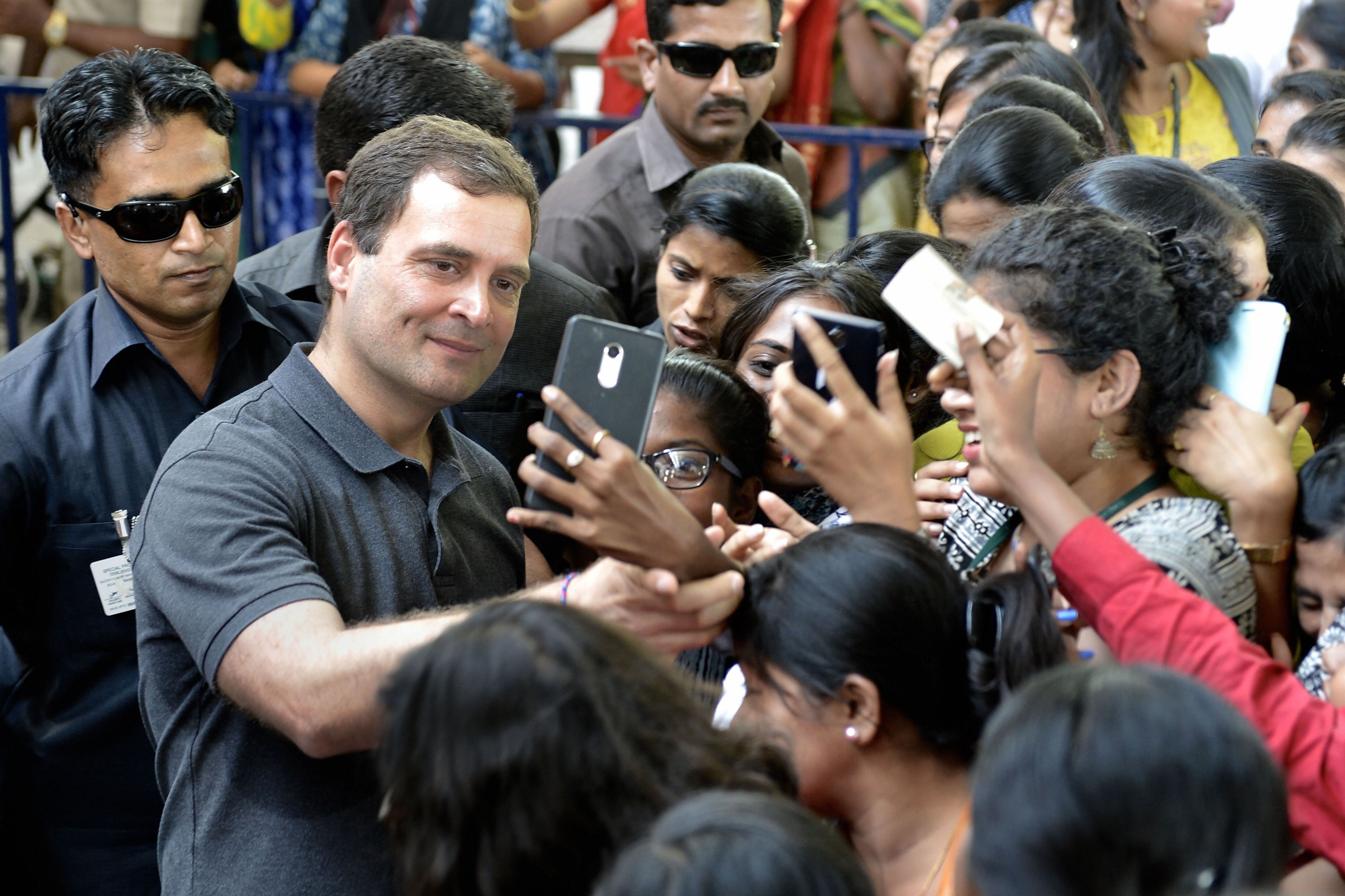 Rahul, who asked the students to challenge him and 'make him uncomfortable', also wondered if the Prime Minister could face a large audience and answer people's questions.

Referring to Modi's policies on Jammu and Kashmir, he said these were setting fire to the state and blamed the Centre for not strategically and systematically handling terrorism.

As soon as Modi assumed power, he made a 'huge mistake' of forging an alliance with PDP just for the sake of power.

'Today, Narendra Modi ji's policies are actually setting fire to Kashmir,' he said, alleging that his policies were allowing Pakistan to carry out terrorist acts in India.

Rahul underscored the need to engage the people of Kashmir and bring them 'on our side'. The Prime Minister's policies 'push the people away so you cannot fight terrorism with one off gestures', he said.

Noting that it was 'our responsibility' to stop Pakistan from carrying out terror strikes, Rahul said: 'It is not good enough to say that 45 CRPF men died and now we will do something.' He sought to know why the attack in Pulwama was not stopped in the first place.

Claiming that the Congress pursued a policy of systematic and strategic approach in Jammu and Kashmir, he said the NDA government had not followed a similar policy.

'We actually crushed terrorism,' he said and referred to the 'drastic fall' in the number of soldiers and people killed during UPA's tenure.

The Congress followed a multi-pronged approach when it came to power in 2004 and toed both systematic and strategic lines, he said. 'And it was successful,' Rahul said, adding that it led to diplomatic isolation of Pakistan.

Asserting that law must not be applied selectively, Congress president Rahul Gandhi on Wednesday said if his brother-in-law Robert Vadra can be probed, so can Prime Minister Narendra Modi for his alleged role in the Rafale deal.

'I will be the first person to say it... Investigate Robert Vadra but also investigate Prime Minister Narendra Modi,' he said.

He said economic growth is directly related to the mood of the nation and one cannot expect it to happen in a negative and fearful atmosphere.

The Congress will change the mood of the country and make people feel happy and empowered, the Congress chief said while addressing students at a college in Chennai.

Asked about Vadra, who is being probed in connection with a money laundering case related to purchase of assets abroad and a land case in Rajasthan's Bikaner district, the Congress president, who told the students to refer to him as Rahul, said the law must apply to everybody.

Modi is a 'corrupt' man, he bypassed negotiations and ran parallel negotiations on the Rafale deal, Rahul alleged.

The Congress chief said the Prime Minister should have the guts to face the media and asked why Modi was 'hiding'.

The BJP and the government have repeatedly rejected the Congress's allegation of corruption in the Rafale fighter jet deal.

Rahul also alleged that the BJP's idea is to capture every institution in the country and run them from Nagpur, the RSS headquarters.

He promised that the Congress would pass the women's reservation bill if it comes to power. 'Don't see enough women in leadership positions. You cannot have women in power in India until the attitude towards them changes,' he told the cheering crowd.

In response to a question, he said he had learnt the lessons of humility and love from his mother Sonia Gandhi.

When they answered, 'no', he said, 'I think it's pretty clear the damage demonetisation did. PM should have taken your advice.'

No sacrifice too great to defeat RSS-BJP ideology of hatred: Rahul