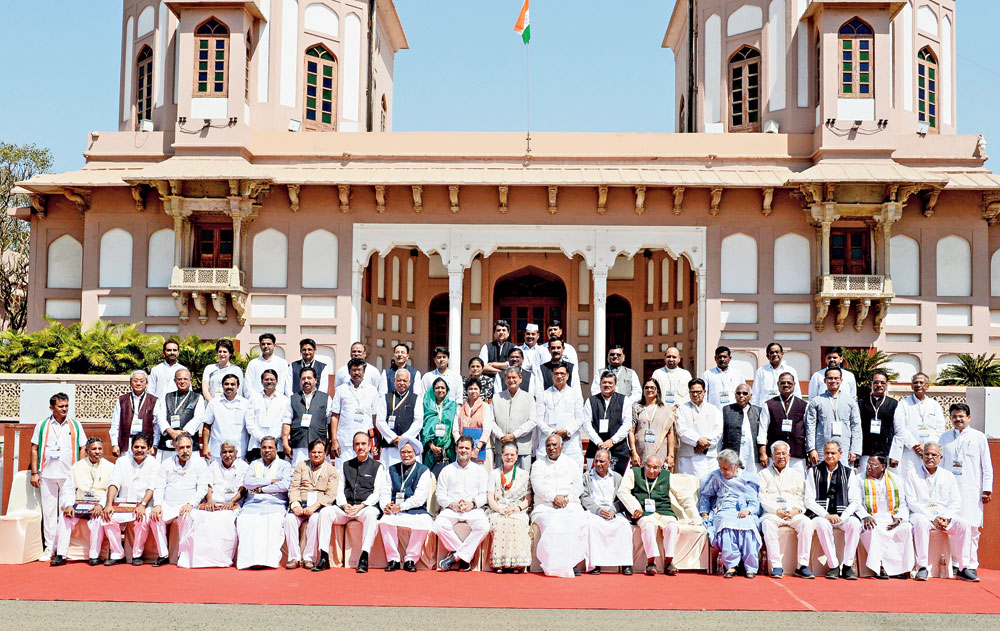 The Congress Working Committee (CWC) on Tuesday debated how to combat the attempts to divert attention from the “colossal failures” of the government and condemned Prime Minister Narendra Modi’s “cynical exploitation” of national security for his own political survival.

Most leaders at the Ahmedabad session insisted there was no need to be defensive as the BJP’s track record of fighting terrorism and dealing with hostile neighbours had been pathetic while the Congress built the nation and sacrificed immeasurably to sustain the country’s freedom.

It was decided that the government’s perceived failures would be forcefully exposed, in addition to explaining to the people the historical facts related to nationalism and terror.

The resolution adopted by the CWC said: “The Congress party expresses its strong disappointment that the Prime Minister is cynically exploiting the issue of national security, on which we are all united, to divert attention from his colossal failures, bogus claims and persistent falsehoods.”

Conscious of the fact that Modi’s attempts to whip up passions resonated with the masses, the resolution recalled how Congress president Rahul Gandhi had extended full support to the government after the February 14 Pulwama terror attack and expressed solidarity with the soldiers.

“The CWC sends a stern and unequivocal message to India’s enemies that India stands united and resolute as one nation to confront and defeat their nefarious agenda. India is a resilient democracy, proud of its brave armed forces. It shall never be defeated by forces of violence and terror,” the resolution stated.

As any criticism of the government is being projected as pro-Pakistan posturing, the Congress’s highest policy-making body tried to put in perspective the differing views at the time of elections.

“Congress is conscious of its role and national obligations as a responsible political party. India as a mature democracy has different viewpoints and ideologies represented by different political parties. Dissent and articulation of ideological differences are integral to our political narrative, especially during elections. These must not be mistaken as weakness or disunity of the country,” the CWC resolution said.

The Congress countered the perception about the BJP’s nationalistic credentials by delving into history: “This meeting, saluting the memory of Gandhi, Jawaharlal Nehru, Sardar Patel and the leaders of the freedom struggle, recalls their unflinching commitment to the unity of the Indian people and in upholding the composite culture of our multilingual, multi-religious and multicultural society.”

It added: “They all believed in harmonious coexistence of Indian people, celebrated its pluralism, and firmly rejected the divisive and pernicious ideology of Hindutva propagated by the RSS and its affiliates. The Prime Minister and the BJP are insulting their struggle, sacrifices and enormous contribution in nation building by brazenly seeking to hijack their legacy and pretending to be the champions of their values.”

Detailing what it said were the government’s failures on various fronts — economic, administrative and political — the resolution said: “Five years of Modi-BJP government has been a period of false promises and betrayal of people’s trust and confidence.

“This government has been a failure on all fronts and has inflicted pain and misery on the people through its reckless decisions of demonetisation and hasty imposition of a flawed GST…. The unprecedented joblessness, agrarian crisis and distress of farmers and agricultural labourers are issues of grave national concern.”

The Congress vowed not to allow the political narrative to be vitiated further.

“An atmosphere of fear and insecurity is all pervasive particularly among women, students, academics, writers and the business community; there are deliberate attacks on the constitutional and other safeguards for Scheduled Castes, Scheduled Tribes, OBCs and minorities; and there is subversion of all institutions of governance,” it said.

The CWC urged all democratic and progressive forces to unite and pool their energies to fight the purported anti-people policies of the government.

The resolution sought a mandate “for better governance and accountability, to repair the grave damage caused to our democratic polity, economy and society by the Modi government, a mandate for change to restore the health of Indian economy, for job creation, social justice and harmony”.

The CWC endorsed Rahul’s promise to ensure minimum income support to the poor, weak and the marginalised sections of society.

No sacrifice too great to defeat RSS-BJP ideology of hatred: Rahul