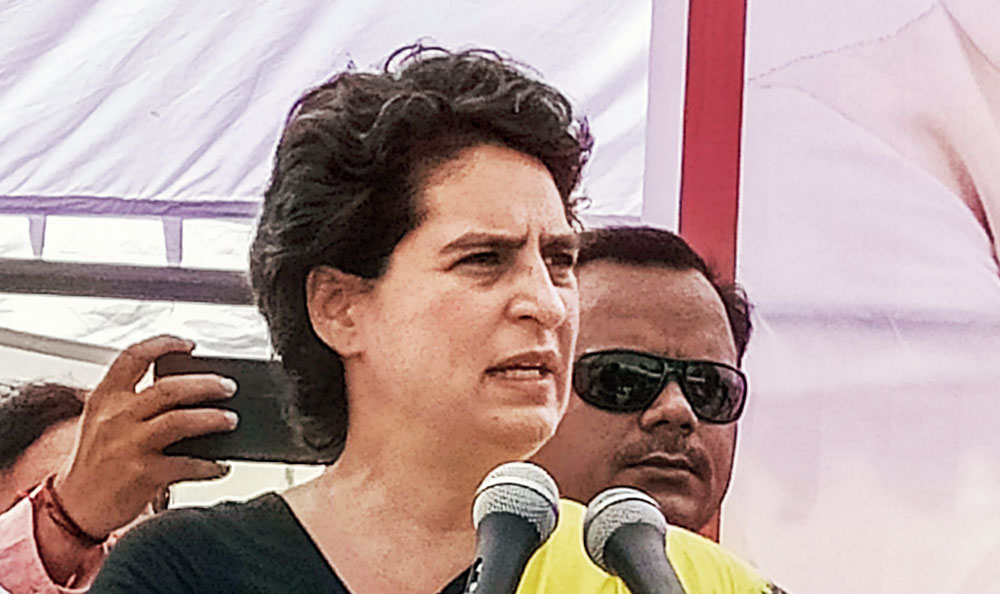 Priyanka Gandhi Vadra has revealed that the Congress candidates in Uttar Pradesh had been selected with the objective of cutting into the BJP’s votes, virtually confirming that her party has no intention to harm the prospects of the BSP-SP alliance.

Her statement confirms something that has been in the realm of speculation. But the uncommon disclosure on record just when the elections are powering into the battleground seats in the heartland is being seen as tactical decision to lessen possible confusion among “secular” voters.

On Wednesday, responding to a question about the Congress harming the SP-BSP candidates, Priyanka said: “Give me three seats where the Congress is cutting into the mahagathbandhan’s votes.”

When Barabanki, Unnao, and Kanpur were cited, she replied: “On these seats, our candidates are strong and will win.”

Then Priyanka, the Congress general secretary in charge of eastern Uttar Pradesh said: “Show me one candidate who is not cutting into the BJP’s votes. I have personally made sure to select such candidates who will cut into the BJP’s votes in Uttar Pradesh. I have selected them with everybody’s suggestions. This is my responsibility. I and other UP leaders sat together and took everybody’s opinion.”

On Thursday, she followed up the statement by asserting; “I will rather die before helping the BJP. I can’t support such a destructive ideology. All my candidates will cut into BJP’s votes.”

Her comments are being seen as a message to the Dalit and Muslim voters that they should prefer the SP-BSP combine instead of wasting their votes on weak Congress candidates.

Although some leaders felt the comments had the potential of harming even “strong” Congress candidates in around a dozen constituencies, Congress sources explained that her intervention was driven by concern that the anti-BJP votes were getting split and helping Narendra Modi in the process.

As electioneering picked up, the feedback from the ground suggested that the split among Muslim voters was helping the BJP in many constituencies.

The Congress believes its candidates are in the reckoning in at least 12 to 15 seats and all the resources had been directed towards them. Priyanka is selectively touring only these constituencies but she still felt the need to stress the point that the larger objective of defeating the BJP should not be undermined at this critical stage.

The Congress is clearly playing second fiddle to the SP-BSP combine in at least 60 constituencies even as the triangular fight in the rest of the seats is cutting both ways.

Candidates have been chosen in a manner that harms the BJP and the high presence of upper caste Hindus on the Congress ticket bears testimony to the strategy that had remained undeclared till now. In over 30-40 seats, the Congress candidates are said to be substantially slicing away BJP votes.

Priyanka’s decision to publicly talk about the hidden strategy now is almost an indirect appeal to the voters to ignore the party’s weak candidates. Her message will particularly help the Muslim voters in making up their mind.

The Congress is bound to bear the brunt of criticism from the secular camp if the BJP manages to retain a large number of seats in the state that sends 80 members to the Lok Sabha.

There is a realisation in the Congress that the Opposition had failed in encashing the resentment against the Modi government and the Prime Minister managed to salvage some ground by hyping up the air strikes in Pakistan.

There is also a fear that the campaign trajectory is going downwards after the half-way mark; the diminishing presence in the media has particularly worried the key strategists. They feel Modi had succeeded in capturing the public space in the past few days.

The Congress is desperately trying to bolster its presence in the public discourse. Party president Rahul Gandhi tweeted on Thursday: “115 election rallies in 60 days. It’s been a long election campaign! Across the energy & enthusiasm of the crowds we are pulling indicate that big change is in the air. India wants NYAY.”

Although he has been addressing at least two rallies daily, the media coverage has begun to diminish.

Contesting the perception of BJP dominance, senior leader P. Chidambaram also said in a series of tweets: “Continuing what I had said a week ago, at the end of four phases of elections, Congress and its allies are ahead of the BJP and its allies. The BJP alone has already lost more than one-third of its 2014 tally at this stage and will lose more seats in the next three phases. The Congress and the other non-BJP parties have to give a final push and the Modi regime will topple over.”

The appeal for the final push is born out of fears of complacency.