It has promised loan waiver for farmers, 20 lakh jobs for youth and free education from KG to PG for Dalits 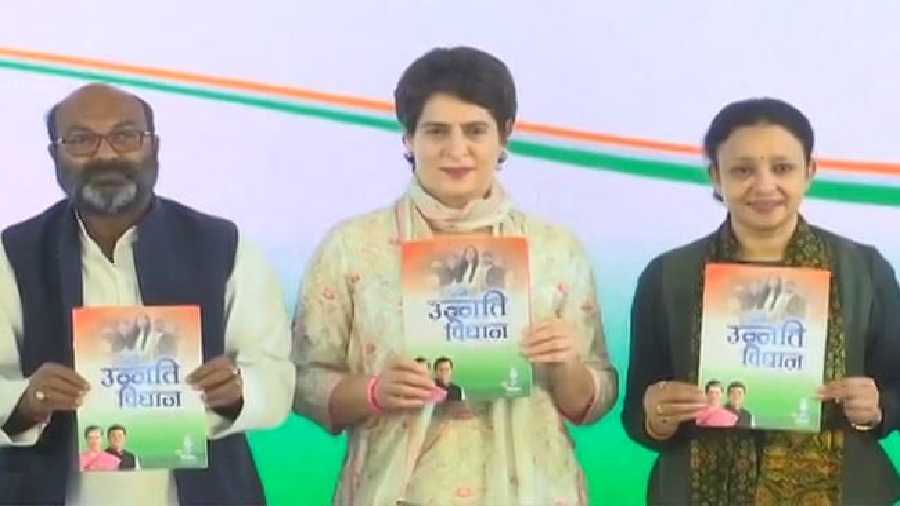 The Congress party on Wednesday launched its manifesto for the Uttar Pradesh Assembly Election 2022. The manifesto has been named Unnati Vidhan Jan Ghoshna Patra and it was launched by Congress general secretary Priyanka Gandhi Vadra.

Ms Gandhi Vadra said the Congress, which has already release a manifesto of poll promises for women and youth in UP, had identified employment and inflation as the state's biggest issues, and promised to make 20 lakh government jobs available if it is elected to power.

"The Congress party believes that the people of Uttar Pradesh deserve a government that puts their progress and well-being at the center of its agenda. The people of the state need such a political system which can bring positive changes in their lives. UP Congress's Unnati Vidhan will prepare the way for this," tweeted Priyanka in Hindi.

"We have released three manifestos so far - for women, for youth, and today the general one. Everything is based on suggestions from the public. We talked to one lakh people... including common people, labourers, farmers and people of all classes. This is a public manifesto," she said.

Here are some of the promises made by the Congress in its UP Election Manifesto:

- Farm loans to be waived off on the lines of Chhattisgarh

- Ad hoc teachers and Shiksha Mitra to be regularised, Sanskrit and Urdu teachers’ vacant positions to be filled

- Housing for rural and urban poor and middle class

- OBC and poor students to get hostel accommodation and scholarships

- Reservation in the promotion to SC/ST government employees

- Salary of school cooks to be increased to Rs 5,000 per month

Priyanka Gandhi Vadra on Wednesday accused the BJP of copy-pasting the pledges made by her party in their Uttar Pradesh poll manifesto which she termed as "dhokha patra".

The BJP on Tuesday assured free electricity for irrigation, a job for every household and free travel for women over 60 in its Uttar Pradesh election manifesto, which also promised a minimum 10-year sentence in cases of what it describes as "love jihad".

"The BJP should name its 'Ghoshna Patra' as 'Dhokha patra'. The BJP, which used the talk about past 70 years, could not fulfil even one-fourth of the promises made in its manifesto in past five years years," Priyanka said in a tweet in Hindi.

"It (manifesto) neither has the account of the work of five years, nor has the vision of building the future. That is why, it (BJP) has copy-pasted the pledges of Congress," she added.

Congress released the manifesto a day before the start of the first phase of the polls.

The BJP and the Samajwadi Party released their manifesto for the UP election on Tuesday.