Advertisement
Home / India / It is woman's right to decide what she wants to wear: Priyanka Gandhi Vadra

It is woman's right to decide what she wants to wear: Priyanka Gandhi Vadra 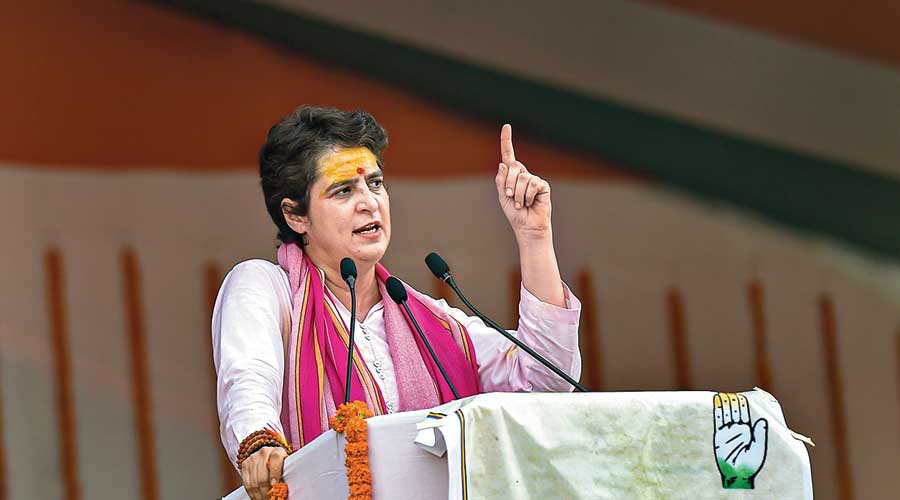 Whether it is a bikini, a 'ghoonghat', a pair of jeans or a 'hijab', it is a woman's right to decide what she wants to wear, Congress leader Priyanka Gandhi Vadra said on Wednesday amid the ongoing hijab row in Karnataka.

She asserted that this right is guaranteed by the Constitution.

Incidents of stone pelting and use of force by police were reported on Tuesday as the hijab row in Karnataka escalated and protests by students spread to more colleges prompting the state government to declare a three-day holiday for all educational institutions.

"Whether it is a bikini, a ghoonghat, a pair of jeans or a hijab, it is a woman's right to decide what she wants to wear," Gandhi tweeted.

"This right is GUARANTEED by the Indian constitution. Stop harassing women," she said using the hashtag 'ladkihoonladsaktihoon'.

Whether it is a bikini, a ghoonghat, a pair of jeans or a hijab, it is a woman’s right to decide what she wants to wear.

This right is GUARANTEED by the Indian constitution. Stop harassing women. #ladkihoonladsaktihoon

The hijab controversy first erupted in January at a government PU College in Udupi, where six students who attended classes wearing headscarf in violation of the stipulated dress code were asked to leave the campus, has spread to different parts of the state with Hindu students too responding by turning up in saffron shawls.

Such saffron-clad students are also being barred from entering classes.

The row has also taken a political colour as the ruling BJP stood strongly in support of uniform-related rules being enforced by educational institutions, calling the headscarf, a religious symbol, while the opposition Congress has come out in support of Muslim girls.

Calm prevailed on Wednesday in the educational institutions which witnessed tense moments over the Hijab row earlier, as the Karnataka government had ordered closure of all high schools and colleges in the state for three days.

Most of them returned to the online mode of teaching, sources said.

Primary schools functioned as usual across the state without any interruption.

Protests for and against the 'hijab' had intensified in different parts of Karnataka and turned violent in some places on Tuesday.

"Congress leaders are adding fuel to the fire in connection with the Hijab issue. If they continue to do so in future, people in Karnataka will throw them in the Arabian Sea," Jnanendra told reporters here.

He added that the Congress Karnataka Chief D K Shivakumar has given wrong information to the media that the Indian tricolour was brought down in Shivamogga and was replaced with saffron flag.

"National tricolour is never flown all the time. Shivakumar is speaking irresponsibly. We can understand the motive behind such statement coming from a senior leader ," the minister alleged.

Denouncing Congress, Ashoka said, "It is not good for the Congress to instigate people. They give some statement and instigate people. Congress' conspiracy is clearly visible in this issue. One section is fanning this issue while the other is trying to douse it."

He added that the government has already clarified that wearing of Hijab and the saffron scarves are not allowed in the classrooms.

Noting that the government will abide by the High Court order, the minister said it was not good to take law into the hands when the government has already issued an order clarifying on the dress code.

The Karnataka High Court is hearing the matter on a batch of petitions challenging the Karnataka government order dated February 5, which prohibited any cloth other than the prescribed uniform, which disturbed peace, harmony and law and order.

"We ministers held a meeting along with the officials to take stock of the situation. The matter is pending in the court and we are waiting for the outcome. Already, a circular has been issued on the dress code," he had told reporters here.

Lamenting that the Covid had already spoiled two precious years, the minister said when the atmosphere was conducive for education, this controversy erupted, which had to be put an end to immediately.

Vikas M, studying in a pre-university college in the city said the second and third wave of Covid had badly affected their studies due to which they could not complete their courses, especially the practical classes.

"Now, this issue has further hampered our studies. Online classes are no match to the physical classes but we have to cope with it," Vikas told PTI.