On the second day of the yatra's MP leg, Rahul Gandhi was joined by his sister Priyanka Gandhi Vadra along with her husband and son 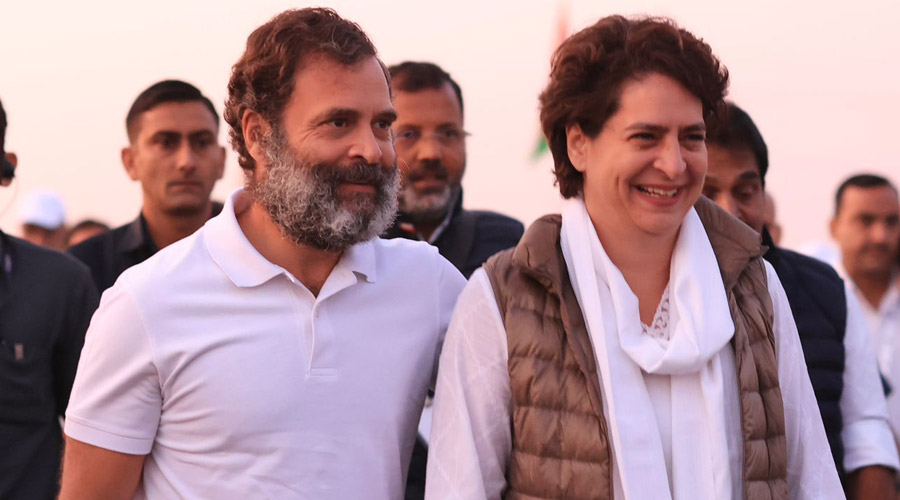 Congress general secretary in-charge of Uttar Pradesh Priyanka Gandhi Vadra along with her husband and son joined the Bharat Jodo Yatra led by her brother Rahul Gandhi in Madhya Pradesh on Thursday.

During the foot march in Rustampur village of Khandwa district, a 63-year-old woman suggested to Rahul Gandhi that if he wants the Congress to come to power in MP, where the Assembly polls are due next year, he should announce the waiver of farmers' loans.

On the second day of the yatra's Madhya Pradesh leg, Rahul Gandhi started the foot march from Borgaon in Khandwa district after sunrise.

Priyanka Gandhi, her husband Robert Vadra and son Rehan were seen matching steps with Rahul Gandhi for the first time since the yatra started on September 7 from Kanyakumari in Tamil Nadu.

Congress workers raised slogans in support of Rahul Gandhi and his sister and tried to come close to them, but police were seen making hectic efforts to prevent them from doing so.

The yatra, a mass contact initiative of the Congress, entered its 78th day on Thursday.

Talking to PTI after the foot march entered Rustampur, Anita Mahajan (63), hailing from a family of farmers, said, "I told Rahul that if he announces loan waiver for farmers, his party's government would surely be formed in MP."The woman also suggested to Rahul Gandhi to make efforts for a reduction in the prices of cooking gas and chemical fertilisers and a hike in the government's pension for widows.

Farm loan waiver was the Congress' main plank in the 2018 Madhya Pradesh Assembly polls, which the party had won and formed government after 15 years.But, later 20 MLAs quit the Congress, resulting in the collapse of the Kamal Nath government in March 2020.

The Bharatiya Janata Party (BJP) came back to power in the state on March 23, 2020 under the leadership of Chief Minister Shivraj Singh Chouhan.

Meanwhile, on the second day of the yatra in MP on Thursday, Rahul Gandhi also tried his hands at the bow and arrow amid a group of tribals.

He also made his sister Priyanka Gandhi, brother-in-law, nephew, Congress veteran Digvijaya Singh and other party leaders to give it a try.

Police personnel on both sides of the road held ropes as part of the security to Rahul Gandhi.

The yatra will enter Rajasthan from Madhya Pradesh on December 4, after covering a distance of 380 km.

Pilot has joined the foot march at a time when demands for the change of leadership have been raised again in Rajasthan, before the entry of Rahul Gandhi's yatra into the desert state.