Shahid disappeared from his home and joined the militancy, adopting the alias of Rizwan Bhai 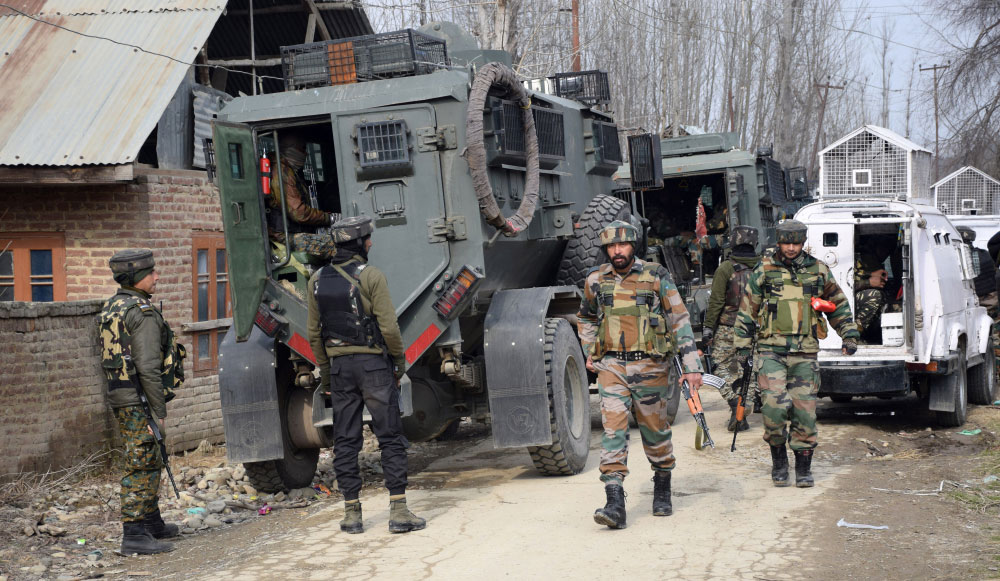 Security personnel in Kashmir. Shahid's disappearance is the latest evidence of how the security force’s atrocities give birth to more and more militants
Picture by Shutterstock
Muzaffar Raina   |   Srinagar   |   Published 22.03.19, 10:04 PM

School principal Rizwan Pandit’s death has given birth to Rizwan Bhai, the militant.

After 28-year-old Rizwan Pandit died in police custody on Tuesday — two days after being arrested for alleged terror links — his friend Shahid Manzoor didn’t wait for the body to arrive home or the anti government protests to begin.

He disappeared from his home and joined the militancy, adopting the alias of Rizwan Bhai — the latest evidence of how the security force’s atrocities give birth to more and more militants.

Although Rizwan and Shahid lived just 3km apart in Pulwama district, they had met and become friends only last year — in Jammu’s

Rizwan’s family and Shahid claim they were framed and booked under the Public Safety Act, which allows detention without trial for up to two years.

A court quashed the use of the PSA against Rizwan, and he was released a month before Shahid. It’s believed they spent four to five months in jail together.

“They never met again. That is because my brother, who had a master’s in chemistry, wanted to live a dignified life and was concentrating on studies. He was applying for a PhD,” Mubashir told The Telegraph. “But they tortured him to death.”

An audio has surfaced showing Shahid, a resident of New Colony Awantipora, purportedly announcing his baptism into militancy, saying he is doing it for the good of Kashmir’s future generations.

“I had no faith in the gun, and when I saw my brothers pick up arms I felt they were playing with their lives. But today I believe that the only remedy for our sufferings is jihad and the gun,” the voice says. “It is better to have a short (life), and whatever days are left it will be a dignified life.”

Police sources said they were investigating the audio’s authenticity.

The speaker claims that when he learnt about Rizwan’s arrest on Monday, he went into hiding, fearing he would meet the same fate.

“When I learnt yesterday (Tuesday) that my friend had been martyred, I immediately joined the ranks of the mujahideen because I knew what happened to him today can happen to me tomorrow.”

The speaker says the duo were abused and tortured while being detained at the Awantipora police station.

“We were threatened (and asked) to work as informers or face the PSA. The interrogators abused our sisters and mothers. It hurt us more than the physical torture.”

The speaker apologises to his family for taking the decision without their permission. “I too wanted to live and serve you (the parents) but death is better than a life where your honour is not safe.”

Rizwan’s death has triggered outrage in the Valley, with politicians from across the separatist-mainstream divide seeking punishment for the policemen responsible.

In the video, the speaker urges people to follow in the footsteps of Jaish bomber Adil Ahmad Dar who carried out the Pulwama attack that killed 40 CRPF men.

Around 200 militants were killed in Kashmir last year but around 200 local young men joined the insurgents, recording the heaviest recruitment figures in a decade.