Gurudwara Sis Ganj Sahib near the Red Fort stands a symbol of the immortal sacrifice of Guru Tegh Bahadur: Modi 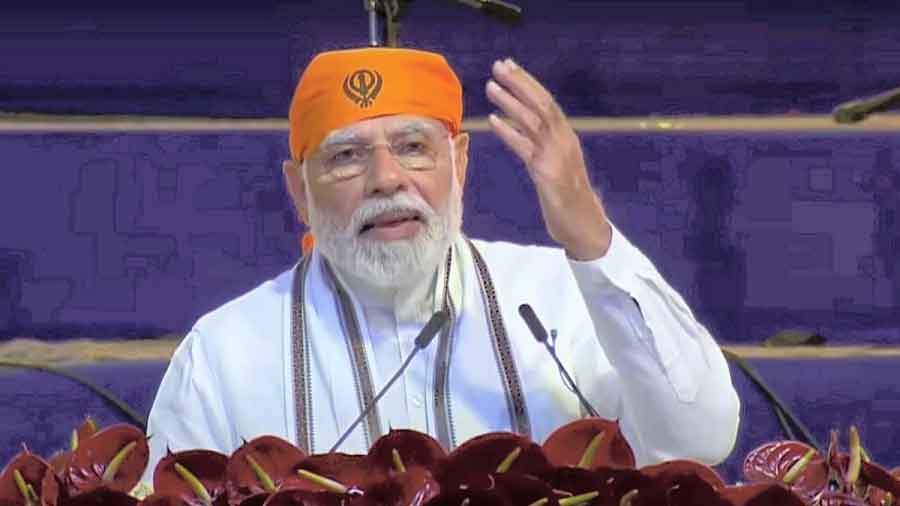 India has never posed a threat to any country or society and it thinks for the welfare of the entire world even today amid global conflicts, Prime Minister Narendra Modi said on Thursday, asserting that the country is following the ideals of Sikh gurus.

"This holy Gurudwara reminds us how great was the sacrifice of Guru Tegh Bahadur ji to protect our great culture. At that time there was a storm of religious fanaticism in the country. India, which considered religion as a matter of philosophy, science and self-reflection, was facing people who had committed violence and atrocities in the name of religion," he said.

At that time, there was a great hope for India to save its identity in the form of Guru Tegh Bahadur, he noted. "In front of Aurangzeb's tyrannical thinking, Guru Tegh Bahadur ji, becoming 'Hind di Chadar', stood like a rock," Modi said.

Red Fort is witness that Aurangzeb and tyrants like him might have beheaded many people but our faith could not be separated from us, the prime minister said. The sacrifice of Guru Tegh Bahadur has inspired many generations of India to live and die to protect the dignity of their culture, for its honour and respect, he said.

Big powers have disappeared, big storms have calmed down, but India still stands immortal and is moving ahead, Modi asserted. "India has never posed a threat to any country or society. Even today we think for the welfare of the whole world. When we talk about a self-reliant India, we keep the progress of the whole world in front of that goal," he said. The prime minister also released a commemorative coin and postage stamp to mark the occasion.

The programme was focussed on highlighting the teachings of the ninth Sikh guru who sacrificed his life to protect religion and human values, ideals and principles in world history. Guru Tegh Bahadur's death anniversary is commemorated as 'Shaheedi Divas' every year on November 24.

Gurdwara Sis Ganj Sahib, built at the spot where he was beheaded, and Gurdwara Rakab Ganj, the site of his cremation, in Delhi are associated with his sacrifice. His legacy serves as a great unifying force for the nation. The fort was chosen as the venue for the event as it was from here that Aurangzeb had given orders for the execution of Guru Tegh Bahadur in 1675, according to Ministry of Culture officials.

The event also saw performances by 400 Sikh musicians and a langar was also held.

We bow to Sri Guru Tegh Bahadur Ji on his Parkash Purab. https://t.co/c1uRCOSZta