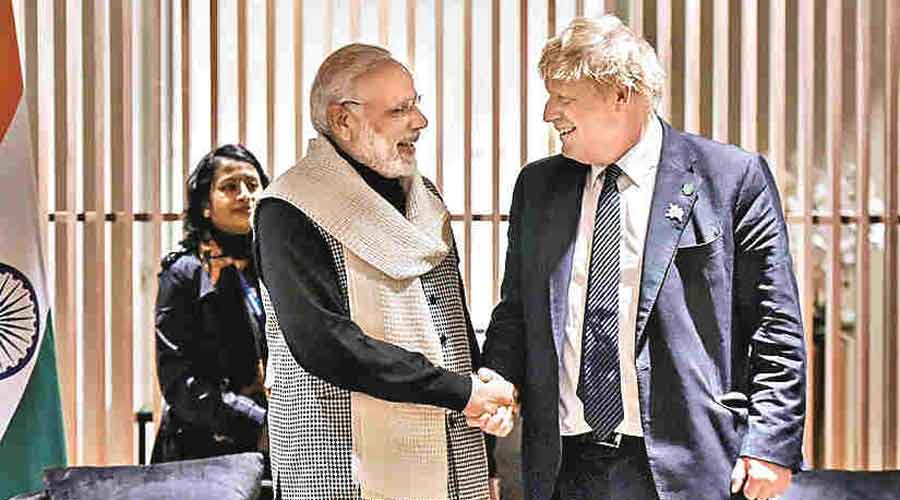 British Prime Minister Boris Johnson said on Wednesday that his two-day visit to India, starting in Gujarat on Thursday, will deepen the strategic trade, defence and people-to-people ties between the two countries.

Addressing the House of Commons for his weekly Prime Minister's Questions (PMQs) on the eve of his visit, Johnson said the trip to Ahmedabad and New Delhi will build on India being invited as a guest country for the G7 Summit hosted by the UK in Cornwall in June last year.

"I will be travelling to India to deepen the strategic trade, defence and people- to-people ties between our two countries, building on India's involvement in the Carbis Bay G7 summit," Johnson told members of Parliament.

"I will be seeing Prime Minister (Narendra) Modi in Delhi, meeting Indian business people investing in the UK and visiting British investments in India, he said.

Prime Minister Modi had addressed the G7 summit at Carbis Bay virtually as his travel plans were impacted by the COVID-19 pandemic. The two leaders met in person later in the year, when Modi travelled to Glasgow for the COP26 climate summit in November. This followed Johnson's planned visits to India in 2021 being cancelled twice due to the pandemic situation in either country.

This week, it is expected that the Russia-Ukraine conflict will feature prominently during the bilateral talks between the leaders when Johnson is in New Delhi on Friday.

Downing Street has stressed that the UK would not look to "lecture" India over its neutral stance in the United Nations or its decision to hike Russian oil imports.

"This visit is not framed on the Russia-Ukraine crisis. Obviously, that is really important but this is a visit we have planned for a very long time. India is an incredibly important partner," Johnson's official spokesperson, who is accompanying him to India, told reporters at Downing Street.

"The Prime Minister has been wanting to make this trip to build our partnership across trade, investment, security and defence, and green energy. We will be discussing all those issues and it is expected that Russia-Ukraine will be on the agenda. But we won't be seeking to sort of lecture India or try and persuade them into one position or another. We will be seeking to work together constructively as an important international partner, the spokesperson said.

Asked if the issue is likely to dominate the closed-door discussions between the two Prime Ministers, the spokesperson asserted that it would be one of many topics. "Obviously, Russia-Ukraine is a huge priority for the UK at the moment and for the world. It's a global issue that has destablised the economy, the oil markets and international security. So, it would absolutely be on the agenda," the spokesperson said.

Downing Street has reiterated the position that "different countries are in a different position" when it comes to energy security and that the UK accepts that dynamic in relation to levels of Russian oil imports, whether it is in Europe or in India. Meanwhile, with the third round of free trade agreement (FTA) negotiations scheduled in Delhi for next week, Johnson's first visit to India as Prime Minister is also expected to push forward trade talks towards an end of the year agreement timeline.

"Both countries have set out an intention to reach an agreement by the end of this year. It's not a fixed deadline, we won't rush it. We would take as long as it takes to reach a good deal for both countries," his spokesperson said.

Thursday, the first day of the visit, will be focused on trade and investment and commercial matters in Ahmedabad, involving a visit to a university and a new business as well as some cultural sightseeing.

In New Delhi on Friday, the UK Prime Minister is scheduled for a ceremonial day of greetings and meetings with Modi and business leaders. Unlike previous prime ministerial visits, he is not accompanied by a business delegation from the UK.

The visit coincides with a crucial vote in the House of Commons on Thursday, when MPs will decide if Johnson should be referred to the Committee of Privileges over whether he knowingly misled Parliament over the partygate scandal involving lockdown-breaching parties at Downing Street.

Downing Street dismissed the notion that there was any itinerary reconsideration around the Parliament vote clash with the India visit, which they said has been in the making for some time now and reflects the "importance of the bilateral relationship with India".