President's rule in Maharashtra if no government in place by November 7: BJP leader Mungantiwar

The tenure of the existing Legislative Assembly ends on November 8 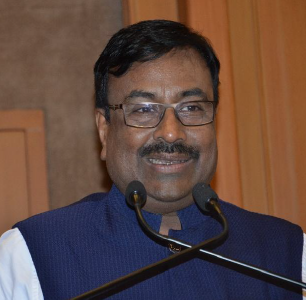 BJP leader Sudhir Mungantiwar's (in picture) comments came even as no headway could be seen in government formation in the state eight days after results of the October 21 Assembly elections were announced.
Wikimedia Commons
PTI   |   Mumbai   |   Published 01.11.19, 09:36 AM

Maharashtra may head for President's rule if the new government in the state is not in place by November 7, state finance minister and BJP leader Sudhir Mungantiwar said on Friday.

His comments came even as no headway could be seen in government formation in the state eight days after results of the October 21 Assembly elections were announced.

The tenure of the existing Legislative Assembly ends on November 8.

'People of Maharashtra have given mandate not to any party but to the Mahayuti (alliance comprising BJP, Shiv Sena and other parties),' he said.

'Out alliance is stronger than Fevicol or Ambuja Cement,' he said.

Mungantiwar expressed confidence that the formation of a new government will take place soon.

President's rule will be imposed if the government formation doesnt happen in the given time,' Mungantiwar said.

He said the main hurdle in government formation was the Sena's demand for chief minister's post for 2.5 years.

Earlier today, Shiv Sena leader Sanjay Raut asserted the state chief minister will be from the Sena, adding that there has been no talks yet between the BJP and the Sena on government formation.

Raut had on Thursday met NCP chief Sharad Pawar, triggering speculation about the possible formation of an alternative government in Maharashtra at a time the Sena and the BJP are locked in a tussle over power sharing. Raut had met Pawar on October 21 as well, however, he maintained that the meeting was private in nature.

Mungantiwar, during the interview, when asked if the BJP would accept the demand of power sharing, said, 'We have already named Devendra Fadnavis.'

Admitting that there was a deadlock, he said, 'We at the state level will sit together to find a way to resolve the deadlock. If necessary, the central leadership of the BJP will intervene.'

BJP will take the lead in resolving the deadlock over formation of the new government, he said.

Reacting to Sena leader Sanjay Raut's comments on government formation, Mungantiwar said, 'just like the BJP, the Sena also wants the government to be formed at the earliest. We fought the election as an alliance. The issue here is not of Sena or BJP, but the people of Maharashtra.'

Meanwhile, the NCP on Friday said it will try to give an alternative if the BJP and the Shiv Sena fail to form a government in Maharashtra.

NCP chief spokesperson Nawab Malik made the comments even as senior party leader Ajit Pawar has maintained the NCP will sit in the Opposition along with the Congress.

Malik hit out at BJP leader and state minister Sudhir Mungantiwar over his statement on President's rule.

'The people have asked the BJP and Shiv Sena to form government. If they fail to do that on the floor of the House, we will try to give an alternative,' Malik said without divulging details.

The BJP-Shiv Sena fought the October 21 Maharashtra Assembly election in alliance, but are now sparring over sharing the chief ministerial post.

The Shiv Sena is for sharing the post for two-and-a- half years each, but the BJP is reluctant to implement such an arrangement.

The BJP won 105 seats in the election, while the Shiv Sena emerged a distant second, bagging 56 seats.

On the other hand, the NCP and Congress won 54 and 44 seats, respectively, in the 288-member Assembly, where the majority mark is 145.