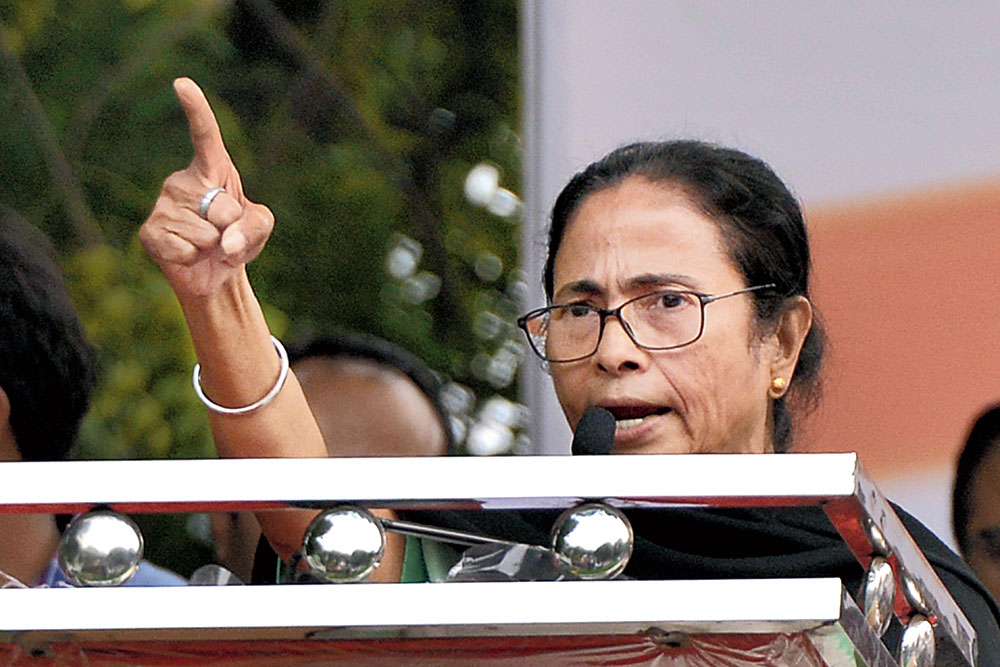 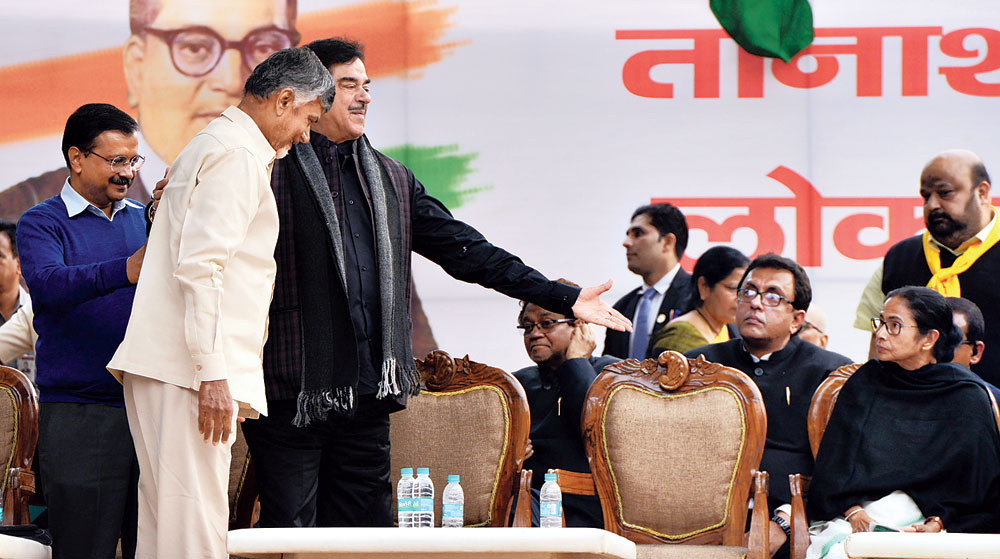 Opposition leaders at the rally in New Delhi on Wednesday.
Picture by Prem Singh
Advertisement

As the curtain came down on the 16th Lok Sabha on Wednesday, some of the most dramatic scenes in recent times played themselves out in the House and outside.

If the day witnessed Mamata Banerjee complaining to Sonia Gandhi about an outburst by Congress MP Adhir Chowdhury, the mood had changed by dusk.

Various parties in the Opposition decided to work on a common agenda and explore possibilities for a pre-poll alliance wherever possible with an eye on getting invited to form the government in the eventuality of a hung Parliament.

With most poll pundits of the view that no one party will have a clear mandate, the strategising appears to have begun in the Opposition camp for getting invited first by the President, more so given the deeper pockets the BJP has.

The decision to begin working on a common agenda was taken at a meeting held this evening at the residence of NCP leader Sharad Pawar. When the meeting began, the guests were chief ministers Mamata, Chandrababu Naidu and Arvind Kejriwal and National Conference leader Farooq Abdullah.

Later, they were joined by Congress president Rahul Gandhi. Briefing mediapersons, Mamata said the leaders decided to ask Rahul to come up with a common agenda, meet regularly and also work on a pre-poll alliance “so that there is no problem after the elections”.

None of the other leaders who spoke to the media referred to a pre-poll alliance. Rahul mentioned that there were issues in Delhi and Bengal where the local units of the parties in the reckoning were averse to any kind of understanding.

Naidu, too, dwelt on the state-level compulsions, adding that these would be addressed and the ultimate aim was to work together at the national level to defeat the BJP. Kejriwal said there was a demand from the people for the Opposition to come together to defeat the Modi government which has divided the country.

Both the first NDA government of Atal Bihari Vajpayee and the UPA were post-poll arrangements. Even this time round, many parties in the Opposition have been maintaining that a national-level pre-poll alliance would be difficult, given state politics that pitches some of them against each other.

However, the issue of getting invited by the President first appears to have weighed on some of them to start considering a pre-poll alliance.

In Parliament in the morning, Behrampore MP Chowdhury had gone after Trinamul while intervening in a discussion on the Banning of Unregulated Deposit Schemes Bill.

Chowdhury had lashed out at Trinamul MPs — protesting against the draft legislation — and said that Bengal’s ruling party runs on money deposited by common people in chit funds.

Mamata ran into Sonia inside Parliament House soon after. The former Congress president was approaching Mamata to greet her with the usual hug when the Bengal leader stopped her in her tracks and complained about Chowdhury’s attack.

What upset Mamata was that it had happened under Sonia’s watch and on a day she was visiting Parliament.

Sonia tried to calm Mamata down and is understood to have told her that though the two parties had their differences, they were in the big fight together.

Mamata mellowed shortly afterwards and used the platform provided by Kejriwal for a show of Opposition unity to reiterate that the issues with the Congress were Bengal-specific. Mamata made it clear that the episode in the morning did not suggest a breakdown in ties.

“We will fight the Congress and the CPM in West Bengal, but work with them elsewhere to defeat the Modi-Shah BJP,” Mamata said. “Our issues are limited to Bengal.”

Kejriwal had organised the rally in solidarity with Mamata’s fight for federalism.

Mamata maintained that all Opposition parties that are against the Narendra Modi-Amit Shah duopoly should fight in their strongholds so that there is no division in the anti-BJP vote.

In Mamata’s scheme of things, the Congress should confine itself to states where it is in a direct fight with the BJP — such as Rajasthan, Madhya Pradesh and Chhattisgarh — and leave others with strong regional parties for these outfits to lead the fight in their respective strongholds. Or at least not expect any seat sharing.

Borrowing from Sholay, Mamata likened Modi and Shah to the dreaded dacoit in the blockbuster film, Gabbar Singh. “We have two Gabbars, they have blood on their hands,” she said, and used a dialogue from Gabbar Singh in the film to say “jo darr gaya woh marr gaya (he who fears is dead)”.

Apart from Mamata, the Save Indian Democracy dharna was attended by leaders of many of the Opposition parties who have been working together for a post-poll arrangement. The CPM and the CPI came early and left before Mamata arrived in view of their Bengal dynamics.

While the BSP was not present, the Samajwadi Party was represented by Ram Gopal Yadav.