Besides police personnel, some bus and lorry drivers and commuters suffered injuries in stone pelting and other related incidents 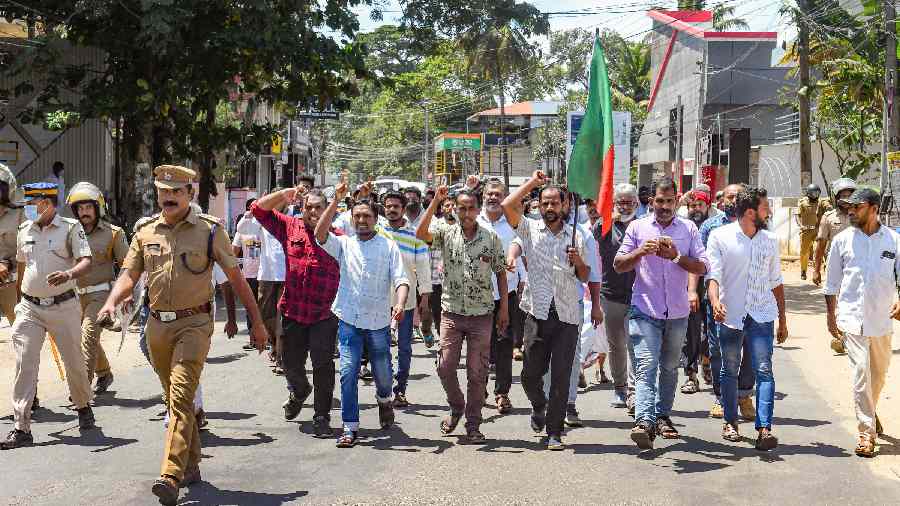 Activists of Popular Front of India (PFI) march during the hartal called by PFI in protest against the nationwide arrest of its leaders by National Investigation Agency and Enforcement Directorate, in Thiruvananthapuram
PTI picture
PTI   |   Thiruvananthapuram   |   Published 23.09.22, 01:12 PM

Kerala on Friday witnessed widespread stone pelting at public transport buses, damaging of shops and vehicles, and sporadic incidents of violence in many places during the statewide dawn-to-dusk hartal called by the Popular Front of India (PFI).

The hartal was called by the PFI to protest against the raids in the offices and residences of its leaders and their subsequent arrests on Thursday by the National Investigation Agency (NIA) and other agencies for allegedly supporting terror activities in the country.

Hartal supporters took out protest marches, blocked the vehicles and forcefully downed the shutters of shops in various places, where the outfit has a strong presence.

Besides police personnel, some bus and lorry drivers and commuters suffered injuries in stone pelting and other related incidents.

The Kerala High Court took a case on its own over PFI's hartal and subsequent sporadic incidents of violence in the state today.

The court said holding hartals were banned by it earlier and the destruction of public property cannot be accepted.

The court also directed the state administration to take stern action against those who violate the court order banning hartals.

In Erattupetta town of Kottayam district, police had to resort to lathi-charge to disperse hartal supporters when they tried to block the vehicles after gathering in large numbers, closed the shops and threatened the people who were travelling on private vehicles.

More police personnel were deployed in and around the town as tension continued to prevail in the area.

A hartal supporter allegedly hit two police personnel, who were on patrolling duty, with his bike when they tried to stop him from abusing commuters at Pallimukku in Kollam.

Though he managed to escape from the spot, a manhunt was on to nab him, police said.

A lottery shop, kept open at Sankranthi Kavala in Kottayam, was destroyed by the hartal supporters while some freight lorries, which were on on its way from Mangaluru, were stopped and its keys were snatched away by them on a national highway in Kannur which caused blocked traffic in the area.

Local media reported that a petrol bomb was hurled at a vehicle which was carrying newspapers for distribution at Narayanpara in Kannur in the morning.

Sevaral buses were largely destroyed as its glasses were broken and seats were damaged.

However, Transport Minister Antony Raju said there was no move to stop the services in the wake of widespread attacks against the KSRTC buses.

"Our intention is to provide maximum service to the commuters who are facing difficulty to travel during the hartal day. Police will surely take action against those who resort to violence and destruction," he said.

A 15-year-old girl and an auto-rickshaw driver suffered minor injuries in the stone pelting allegedly by PFI activists in Kozhikode and Kannur respectively.

A lorry driver, who was on his way to Erode in Tamil Nadu, suffered severe injuries on his nose and eyes after the hartal supporters hurled stones and broke the glass of his vehicle in Kozhikode.

"They attacked us deliberately with an intention to destroy the lorry. The vehicle was parked on the roadside when they came and attacked it. I went to a private hospital for first aid and now I am going to the government hospital for a detailed check-up," he said.

As soon as the PFI called for a hartal on Thursday, the state police chief had given directions to beef up security across Kerala and to take stern action against those who violate the law.

But, there were complaints that police did not act swiftly in many places when hartal supporters tried to block vehicles and forcefully shut down the shops on Friday.

Though a large number of hartal supporters, who indulged in violence and criminal activities, were taken into custody across the state, no exact figure was available at the moment, sources said.

The PFI on Thursday had said a hartal will be observed in the state today "against the RSS-controlled fascist government's attempt to silence dissenting voices using the central agencies".

The hartal would be held from 6 AM to 6 PM, A Abdul Sathar, state general secretary, PFI, had said in the statement.

On Thursday, PFI workers had taken out marches to the places where raids were carried out and raised slogans against the Centre and its investigating agencies. However, central forces were already deployed in all such places as part of strengthening the security.

Multi-agency teams spearheaded by the NIA had arrested 106 functionaries of the PFI on Thursday in near simultaneous raids at 93 locations in 15 states for allegedly supporting terror activities in the country.

Kerala, where PFI has some strong pockets, accounted for the maximum number of 22 arrests, officials said.