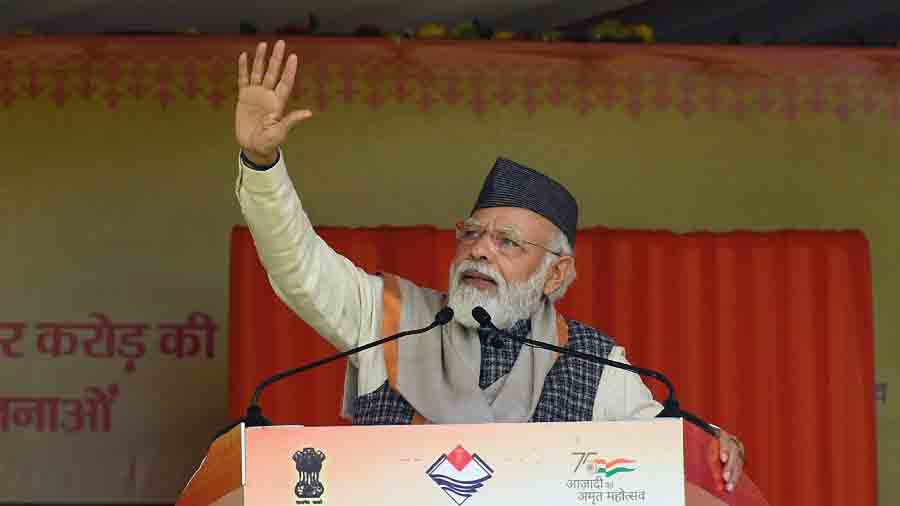 A reference in Prime Minister Narendra Modi’s announcement that December 26 would be observed as the day to commemorate the martyrdom of the two sons of Guru Gobind Singh has annoyed the main organisations and parties associated with Sikhs as well as intellectuals from Punjab.

Coupled with some of the past steps and positions associated with Modi and the Sangh parivar, the latest “arbitrary” reference has rekindled misgivings and is being seen by academics as another attempt at mischief-making.

On Sunday, Modi had said in several tweets: “Today, on the auspicious occasion of the Parkash Purab of Sri Guru Gobind Singh Ji, I am honoured to share that starting this year, 26th December shall be marked as ‘Veer Baal Diwas’. …‘Veer Baal Diwas’ will be on the same day Sahibzada Zorawar Singh Ji and Sahibzada Fateh Singh Ji attained martyrdom after being sealed alive in a wall. These two greats preferred death instead of deviating from the noble principles of Dharma.”

Today, on the auspicious occasion of the Parkash Purab of Sri Guru Gobind Singh Ji, I am honoured to share that starting this year, 26th December shall be marked as ‘Veer Baal Diwas.’ This is a fitting tribute to the courage of the Sahibzades and their quest for justice.

In the tweets that were posted a day after the announcement of polls in Punjab, Modi had added: “The bravery and ideals of Mata Gujri, Sri Guru Gobind Singh Ji and the 4 Sahibzades give strength to millions of people. They never bowed to injustice. They envisioned a world that is inclusive and harmonious….”

The bravery and ideals of Mata Gujri, Sri Guru Gobind Singh Ji and the 4 Sahibzades give strength to millions of people. They never bowed to injustice. They envisioned a world that is inclusive and harmonious. It is the need of the hour for more people to know about them.

The Shiromani Gurdwara Parbandhak Committee (SGPC), the largest body that manages Sikh shrines; Giani Harjinder Singh, the acting Jathedar of the Akal Takht (the apex cleric of Sikhism at Amritsar’s Golden Temple); and former BJP ally Shiromani Akali Dal have asked the Prime Minister to review the use of the word “Baal”, or children, for the Sahibzade.

The orthodox Sikh seminary, the Damdami Taksal, has backed the Prime Minister’s call.

SGPC president Harjinder Singh Dhami said: “Limiting the martyrdom of the younger Sahibzadas to ‘Veer Baal Diwas’ is not fitting their martyrdoms…. We respect the PM’s gesture but arbitrary decisions related to community affairs cannot be accepted as they have to be taken as per Sikh traditions, doctrines, and beliefs. Sahibzadas are not ‘Baal’. For Sikhs, they are ‘Baba’ (a term of respect used for holy men).”

Union home minister Amit Shah tweeted: “With the decision of Prime Minister @NarendraModi  to celebrate ‘Veer Baal Diwas’, not only today crores of children will be able to contribute to the service of the nation by taking inspiration from the patriotism of the Four Sahibzadas, but their sacrifice will be remembered for generations to come.”

In 2016, Shah was slammed for describing the Kerala festival Onam as Vamana Jayanti, which was seen as an attempt to turn the celebration of the mythological annual visit of the banished Asura king, Mahabali, to the kingdom that he once ruled, into the commemoration of an avatar of Vishnu who banished him.

According to the Professor Harbans Singh Encyclopedia of Sikhism, published by Punjabi University, Patiala, Mata Gujari, the mother of the tenth guru Gobind Singh, and his two sons Zorawar Singh (9) and Fateh Singh (6) were arrested by Mughal officials Jani Khan and Mani Khan Ranghar on December 7, 1705, on the day of the Battle of Chamkaur, and confined to the Cold Tower in the fort of Sirhind.

The place is marked by Gurdwara Fatehgarh Sahib complex today, where the Sahidi Jor Mel is celebrated every year at the end of December. The battle was fought between the coalition Mughal forces under Aurangzeb’s regime, which included Rajput and Gujjar state forces, and the Khalsa led by Guru Gobind Singh, whose elder sons Ajit Singh (17) and Jujhar Singh (13) were killed in action.

Forty Khalsa troops are said to have faced a million Mughal troops before eventually being annihilated. Guru Gobind Singh escaped to Machhiwara, in today’s Ludhiana district, where he was rescued by two Pathans, Ghani Khan and Nabi Khan, in whose honour the Gurdwara Sri Ghani Khan Nabi Khan stands.

He was taken to the principality of Raikot - also near Ludhiana - where he was sheltered by local Muslim Rajput feudal lord Rai Kalha whose picture was installed beside Guru Gobind Singh's in Amritsar's Central Sikh Museum in 2017. Kalha's descendants, now in Canada's Vancouver, are custodians of the Ganga Sagar brass jug relic that Guru Gobind Singh is believed to have been served milk in.

The encyclopaedia says that the Sahibzade were produced before the faujdar or Mughal governor of Sirhind, Nawab Wazir Khan, on December 9, that year, who, “tried to lure the Sahibzadas to embrace Islam with promises of riches and honours, but they spurned the suggestion…. Death sentence was finally pronounced.”

The offer of clemency in lieu of conversion was repeated on December 11, on the rejection of which the two boys were “ordered to be sealed alive in a wall. According to tradition, as the masonry around their tender bodies reached chest-high, it crumbled.” This spot is marked by the Gurdwara Bhora Sahib.

The clemency offer was given the next day, as well, and when they refused, “were put to death by execution”.

Their grandmother passed away in the Cold Tower on hearing the news, and the spot is marked by the Gurdwara Burj Mata Gujari. William Irvine’s Later Mughals records that Wazir Khan was beheaded by Khalsa warrior Fath Singh in the Battle of Chappar Chiri in 1710.

Paramvir Singh, the head of Sikhism encyclopaedia department in Punjabi University, told The Telegraph: “There is an apprehension that the martyrdom of the Sahibzade is being limited to nationalism. The nation is not above humanity, and the

Gurus protected humanity from the tyranny of the ruling classes. We want Sikh history to be studied in the correct perspective.”

A series of events have stirred apprehensions about the BJP’s intentions. Modi had released an Uttar Pradesh government pamphlet last month in Varanasi, titled, Sri Kashi Vishwanath Dham Ka Gauravshali Itihas. It says: “In fact, the Sikh faith was established in Punjab to protect the Sanatana Dharma (Hinduism) from the Mughals.

Sikh religion had deep bonding with Kashi since the city was the spiritual capital of Sanatana Dharma…. According to belief, the Panj Piaras (five beloved ones), through whom the Khalsa Panth was founded by Guru Gobind Singh, were first sent to Kashi so that they could attain full knowledge of the Sanatana Dharma and be ready for its protection.”

“This is totally misleading,” explained Paramvir Singh. “The five Sikhs who went to Kashi were not the Panj Piaras. They were sent to learn Sanskrit and Indian traditions. The Khalsas were raised not to merely protect one community but to save humanity from the priestly and ruling class…. There have been similar attempts to distort history in the past as well, but Sikhs are now much more aware and are responding publicly.”

Amandeep Sandhu, author and chronicler of Punjab’s history, wrote on Facebook: “If this is to win over the Sikhs after the move to repeal farm laws on Guru Nanak Dev anniversary did not work, then this is a mistake. The Sahibzadas, though young, are not seen as bal -- kids.  The Sikhs call the younger Sahibzadas as Babas -- revered elders. The reason is: their martyrdom is central to Sikh history.”

He added: “If this is a ploy to show that Sikhs are always disgruntled -- even after the nation wants to respect their martyrs -- they are cribbing about the name of the day, then it works for the Sangh. That is because the Sangh forgets that names are also a matter of dignity. When you name a thing, it can’t talk back to you. But when you name people or an historical event, it makes no sense to name them if the core people do not find dignity in the name.”

Sandhu told this paper: “The BJP either makes mistakes or does mischief in Punjab, which creates a whole lot of trouble. This debate on the nature of the Sikh faith is an old one, promoted by the RSS, and has never found roots in Punjab.”