Advertisement
Home / India / Expose Opposition parties as they are not ready for discussions, Modi tells BJP MPs
'We are open to discussions'

Expose Opposition parties as they are not ready for discussions, Modi tells BJP MPs 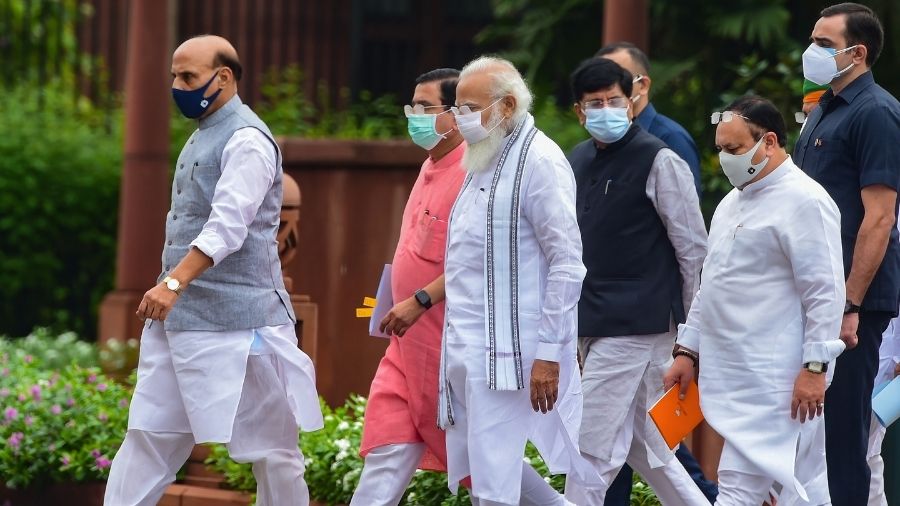 Prime Minister Narendra Modi asked BJP MPs on Tuesday to mark 75 years of independence by organising programmes in every village of their constituencies, Minister of State for Parliamentary Affairs Arjun Ram Meghwal said.

Sources said the prime minister also asked the Bharatiya Janata Party (BJP) MPs to expose the Opposition parties as the government is ready for a discussion but they are not. Accusing the Congress and other Opposition parties of not letting the Parliament to function since it started for the Monsoon Session, the prime minister asked all MPs to expose the party before the public and the media.

The session at the Parliament has been constantly interrupted due to protests from the Opposition and demands for discussions on the Pegasus phone-hacking row, the farm laws and other issues.

Rajya Sabha proceedings were adjourned for almost an hour till 12 noon on Tuesday as a determined Opposition continued to protest against snooping of political opponents of the ruling BJP, journalists and government critics as well as over farm laws.

Congress, TMC and other opposition party MPs rushed into the well of the House, shouting slogans against mass surveillance and farm laws.

Slogan-shouting by the MPs, who also carried placards, drowned the voices of ministers and others who were called to lay official papers on the table of the House.

On the other hand, Lok Sabha was adjourned till 12:30 pm for the third time since the House convened for the day, amid continuous protest by Opposition members over the Pegasus snooping controversy and farm laws.

After the House convened for the day at 11 am, the Opposition members trooped into the Well, shouting slogans and raising banners.

The Congress, CPI, CPI(M), TMC members were protesting over the Pegasus snooping issue, while the BSP, SP and Shiromani Akali Dal were protesting against three farm laws of the Centre.

This has been the dominant behaviour in the Parliament this season and little to no work has been done amid protests by the Opposition.

Agriculture Minister Narendra Singh Tomar took a swipe at the protesting Opposition members and said if they are concerned about farmers, they should allow the proceedings of the House to continue.

He made the remarks while replying to a supplementary query related to an insurance scheme for farmers during the Question Hour as the Opposition members continued with their sloganeering on various issues, including the Pegasus spying issue and the agriculture laws.

On Monday the Centre reached out to the Opposition to end the deadlock over the issues, amid new demands that Home Minister Amit Shah resign and the Prime Minister be investigated.

Meanwhile, addressing the BJP parliamentary party meeting on Tuesday, Modi also said the 75th anniversary celebrations of independence should not merely be a government programme, but it should be a people's movement with people's participation, Meghwal told reporters after the meeting.

He asked the BJP MPs to form a team of two party workers in each Assembly segment, which will organise the programmes and seek suggestions and ideas from people on how they envisage India in 2047 when the country will complete 100 years of independence.

The prime minister told the MPs that these teams of two BJP workers will visit 75 villages in each Assembly constituency and spend 75 hours in each constituency, Meghwal said.

The 75 years of independence can also be celebrated by organising local sports events and cleanliness drives, Modi said.

He also emphasised on the digital literacy of people in rural India so that they can avail maximum benefits of the government welfare schemes, the minister said.