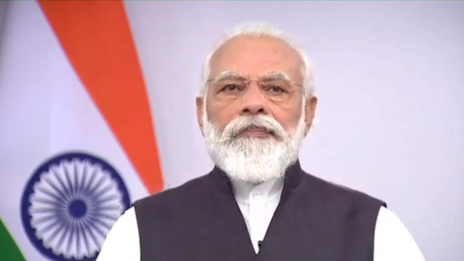 Prime Minister Narendra Modi will virtually address the UN on Friday at the High-Level Segment of the ECOSOC, his first since India was overwhelmingly elected as a non-permanent member of the powerful Security Council last month.

Modi will deliver the keynote address at the Valedictory of the High-Level Segment of the UN Economic and Social Council (ECOSOC) on July 17.

India last month was overwhelmingly elected as a non-permanent member of the powerful UN Security Council on Wednesday for a two-year term.

India, the endorsed candidate from the Asia-Pacific States, won 184 votes out of the 192 ballots cast in the elections for the five non-permanent seats of the Security Council.

During the address, Modi will be joined by Norwegian Prime Minister Erna Solberg. UN Secretary-General Antonio Guterres will also address the segment.

The theme of this year's High-Level Segment is Multilateralism after Covid-19: What kind of UN do we need at the 75th anniversary'.

Held on an annual basis, the High-level Segment represents the culmination of the ECOSOC's annual cycle of work and convenes a diverse group of high-level representatives from Government, the private sector, civil society and academia.

Against the backdrop of a changing international environment and the unfolding Covid-19 pandemic, the session will focus on critical forces shaping the course of multilateralism and explore ways to bolster the multilateral agenda through strong multilateral leadership, effective international institutions, a broadening of participation and an enhanced focus on global public goods, the Permanent Mission of India to the UN said in a statement.

The event, being held on the eve of the 75th Anniversary of the founding of the UN, assumes special significance as it will be the first opportunity for Modi to address the broader UN membership since India overwhelmingly won the Security Council election on June 17.

This year's theme also resonates with India's priority for its Security Council tenure in which New Delhi has called for reformed multilateralism in a post-Covid-19 world.

Modi had earlier delivered the keynote address virtually at the 70th anniversary of the ECOSOC in January 2016. India has had a long tradition of close association with the ECOSOC. The inaugural Presidency of the ECOSOC in 1946 was held by Sir Ramaswami Mudaliar of India.

The UN Charter established the ECOSOC in 1945 as one of the six main organs of the United Nations and is mandated to offer direction to, and undertake the coordination of, the economic, social, and cultural activities of the United Nations, with responsibility for advancing international economic and social cooperation and development.