Modi’s second appeal for a symbolic gesture against the pandemic 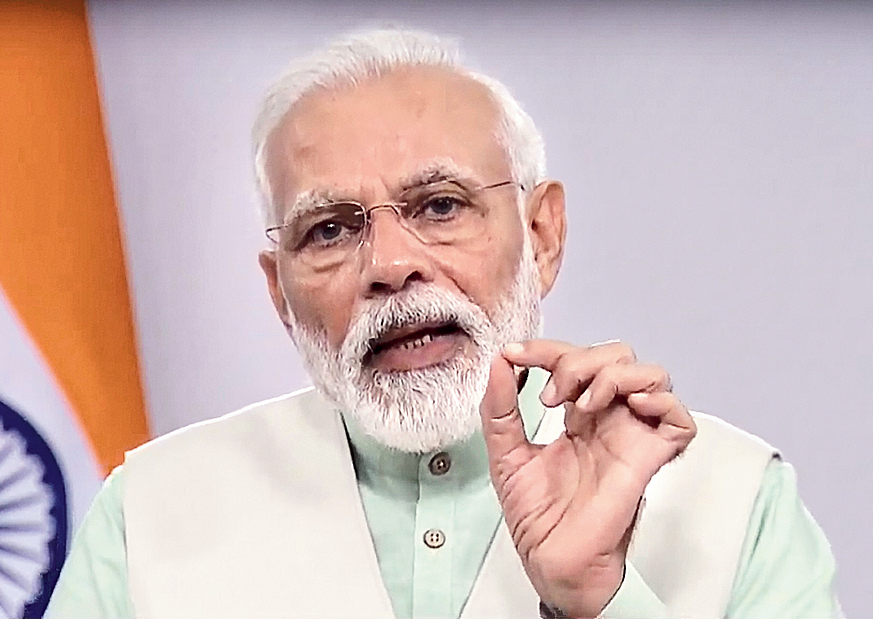 Prime Minister Narendra Modi on Friday urged the nation to fight the “darkness of the coronavirus” by lighting candles, lamps and cellphone flashlights for 9 minutes at 9pm on Sunday.

“On April 5, Sunday, at 9pm, I want 9 minutes from all of you. Turn off all the lights at your homes, stand at your doors or balconies and light candles, diyas (lamps) or mobile phone flashlights for 9 minutes,” Modi said in a video message delivered at 9am.

The message was Modi’s second appeal for a symbolic gesture against the pandemic. In an address to the nation last month, the Prime Minister had asked people to clang metal plates and clap for five minutes during the “Janata Curfew” on March 22, Sunday, to thank the healthcare staff fighting the pandemic. Days later, he announced the 21-day lockdown.

As in his previous two addresses to the nation on the pandemic, Modi had nothing to say about the measures and mechanisms implemented to combat the challenge of the virus. Instead, he seemed to have donned the garb of a spiritual guru, trying to boost the morale of the nation.

Like the call for clapping and clanging, his latest idea too seemed borrowed from Italy, which is reeling from a deep Covid-19 crisis. On a day in March, home-quarantined Italians had stood on their balconies and clapped in a sign of solidarity, following it up on a later date by holding up lit mobile phones, torches and candles.

Keen to avert a repeat of the widespread trampling of social-distancing norms during the “Janata Curfew”, Modi this time cautioned citizens against manifesting their collective strength by assembling on the roads. Many had done so during the Janata Curfew of March 22.

“One must never cross the Lakshman rekha of social distancing. Social distancing should not be breached under any circumstances,” the Prime Minister said on Friday.

Modi did lay stress on the “collective superpower of 130 crore Indians” and he did not refer to religious themes. But his focus on the number 9 prompted many to associate with Hindu motifs, coming at the end of the nine-day Navratri festival, meant to appease the navagrahas or nine planets.

“We must together challenge the darkness spread by the coronavirus crisis, introducing it to the power of light. No one is alone during the lockdown, the collective superpower of 130 crore Indians is with every citizen,” he said.

“So, on April 5, at 9pm, sit in solitude for some time and think of Ma Bharati (Mother India) and picture the faces of 130 crore Indians,” Modi said.

“Experience the collective resolve, the collective superpower of 130 crore Indians. This will in this hour of crisis give us the strength to fight as well as the confidence to win.”

A Sanskrit shloka whose Hindi translation Modi recited betrayed his dependence on the power of “passion and spirit” to weather a medical emergency.

“That there is no greater force than our passion and spirit; that there is nothing in the world we cannot achieve on the basis of this strength,” Modi recited.

He continued in this vein of mysticism: “Friends, in our country the citizenry is considered a manifestation of God. Therefore, when the nation is fighting such a huge battle, one should from time to time keep experiencing this collective superpower, manifesting itself in the form of the people.”

President Ram Nath Kovind and Vice-President Venkaiah Naidu held a videoconference with the governors, repeating an exercise Modi had conducted with chief ministers on Thursday.

“He (Kovind) wholeheartedly endorsed the Prime Minister’s appeal today to all citizens to switch off lights in homes at 9pm on Sunday and instead switch on their mobile flashlights (and light) torches or lamps in an expression of people’s solidarity to fight against (the) coronavirus,” a release from the President’s office said.

“He, however, cautioned people not to let their guard down and steadfastly adhere to the practice of social distancing.”