Tie-ups with Flipkart, Amazon and GoCoop 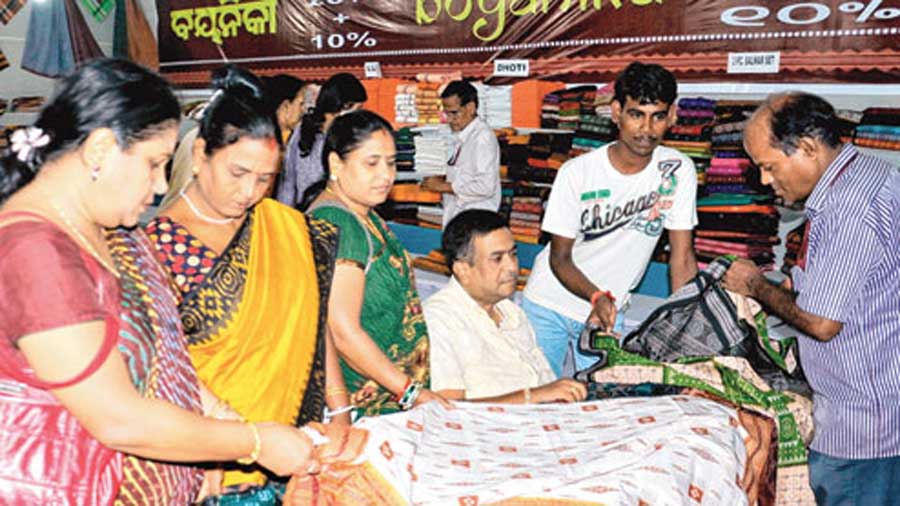 The Odisha government has tied up with the Flipkart, Amazon and GoCoop to sell the state’s handloom, handicraft and textile products to customers across the country and abroad. It is also planning to mobilise private investments in the handloom sector.

“With focus on e-commerce, we plan to reach to a wide range of customers. This will benefit nearly 1.22 lakh weavers who make a living by contributing to the growth of textile and handloom sectors. Following the corona pandemic the state government has asked us to focus on e commerce,” director, textile, handloom and handicraft Jyoti Prakash Dash told The Telegraph.

Officials said that state’s handloom market was worth Rs 600-700 crore. “We have been asked by chief secretary, Asit Tripathy to multiply the turnover,” said Dash.

In order to boost handloom sales the government plans to come up with new designs. “We have planned to transform Odisha’s best products into world class brands by adding new designs, rich colours, towering quality and supreme prominence. So far 166 new designs have been developed. The process for second phase of design and reference collection has started. We have planned to rope in people like Anjali Kalia and Bibhu Mohapatra to promote Odisha’s handloom and textile designs,” he said.

“Besides providing good quality yarn in advance to the weavers to keep their looms running, we have also planned to provide interest free working capital to organisations like Bayanika, Utkalika and Sambalpuri Bastralaya to purchase the produce of the weavers. It has been decided to connect more and more weavers to the GEM portal (one stop government e-Market place) to enable direct sale of their products at the best prices,” he said.

Officials claimed that “Ikat”, the traditional tie and dye variety of the state, was now becoming a global brand. “In a review meeting chaired by chief secretary on Monday it was found that native handlooms products like Pasapali, Sonepuri, Bomkai and Kotpad were moving fast. These sarees have the potential of turning into ‘world class’ products,” officials said adding that these verities of sarees were mainly produced in Bargarh, Sonepur, Kalahandi and Koraput regions. The traditional weavers of these areas possess excellent traditional expertise in these tie & dye designs.

Handloom and textile secretary Subha Sharma said: “The weaver makes the design by using warp or weft or by both. If it is only warp or weft it is called single-ikat, if it is both it is called double-ikat. The double ikat design is also referred as Potala sarees. Odisha’s tie and dye design (Bandhalaka) has also earned GI tag.”

Odisha also plans to scale up international visibility of its handloom products by organising expo-exhibitions at prominent venues, including star hotels. The state government has also decided to develop Balijury Haat of Bargarh district in Western Odisha into the largest Open Ground Cloth Market in Asia with modern amenities and all types of market linkages.

“A market has been there for sell and purchase of handloom products on a daily basis. Businessmen from the neighbouring Chhattisgarh and Jharkhand visit the market for making purchases. We have sanctioned Rs 10 crore to develop it into a modern ‘haat’ with basic amenities,” said Dash.