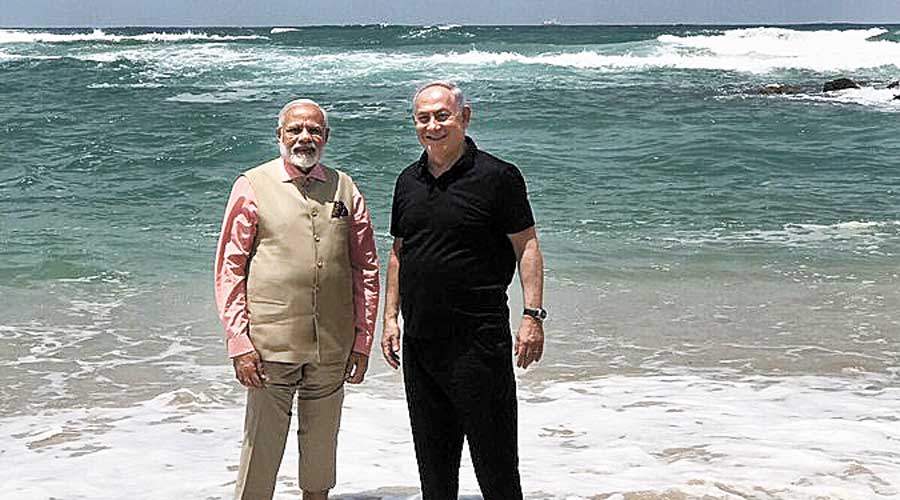 The Guardian newspaper reported that “the selection of Indian numbers largely commenced around the time of Modi’s 2017 trip to Israel, the first visit to the country by an Indian Prime Minister” and a marker of the burgeoning bilateral relationship, including deals between Delhi and Israeli defence industries.

“Modi and the then Israeli Prime Minister, Benjamin Netanyahu, were pictured during the trip walking barefoot together on a beach. Days before, Indian targets had started being selected,” the UK newspaper said.

The picture above was tweeted by Netanyahu in July 2017, showing him and Modi on the beach in Haifa. “There’s nothing like going to the beach with friends!” Netanyahu had tweeted.

The spyware Pegasus, which allows customers to infiltrate mobile phones and monitor messages, camera feeds and microphones, is made and licensed by the Israeli company NSO, which has denied any wrongdoing. NSO said its product was intended only for use by vetted government intelligence and law enforcement agencies to fight terrorism and crime.

The new allegations may escalate concerns that the Israeli government has abetted government abuses by granting NSO an export licence to sell software to countries that use it to suppress dissent.

The Guardian has underlined that India does not officially admit to being an NSO customer, a significant hurdle to challenging the use of the spyware in court.