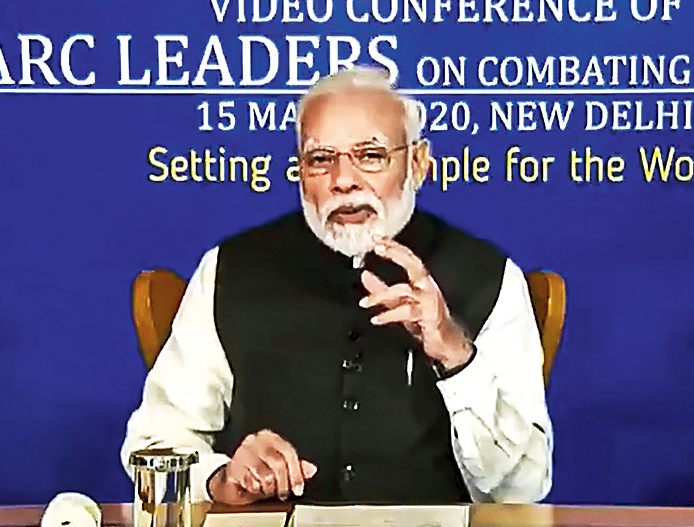 Pakistan on Sunday raked up Kashmir towards the fag end of a video conference initiated by India to evolve a Saarc strategy to fight the coronavirus.

The move punctured the spirit of cooperation that was sought to be built across the region and reminded the world why the multilateral regional forum had made no headway in recent years.

Undaunted that he was seated at the high table of heads of state and government, Pakistan’s minister of state for health Zafar Mirza introduced Kashmir into the discussion.

All other Saarc countries were represented by the heads of state and government for the videoconference, initiated by Prime Minister Narendra Modi.

While stressing the role of communications in containing the virus, Mirza said: “We hope that during this covid emergency, our member countries will provide access to emergency assistance to all our regions in our countries because equity in health is a fundamental principle in public health.

“In this regard, let me say that it is a matter of concern that covid-19 has been reported from Indian-occupied Jammu and Kashmir. In view of the health emergency, it is imperative that all lockdown in the disputed territory must be lifted immediately. Opening up communications and movement would facilitate dissemination of information, allow distribution of medical supplies and enable containment and relief efforts to proceed unimpeded.”

Mirza flagged the fact that there had been no Saarc summit since 2014.

India-Pakistan hostilities have stalled the Saarc process indefinitely, and Modi’s surprise decision to call such a meeting had created a sliver of hope for a possible revival.

But after the videoconference, government sources said it was too premature to talk in those terms. Pakistan was the last of the seven other Saarc countries to confirm participation in the videoconference and opted to send Mirza, who is also special adviser to the Pakistan Prime Minister on health, in keeping with Islamabad’s downgrade of diplomatic relations with India following the changes in Kashmir last year.

Mirza’s contention on the communications lockdown in Kashmir is not fully correct now as it was lifted earlier in March, after seven months, with the restoration of 2G Internet facilities. But high-speed Internet services are yet to be restored.

Indian government sources said it was unfortunate that Pakistan chose to be churlish and used the conference to make an “unwarranted and out-of-context reference”.

India’s proposal to create a covid-19 emergency fund through voluntary contributions from all member countries was welcomed by most others. India has offered to take the lead with an initial offer of $10 million for this fund. Nepal’s Premier, K.P. Sharma Oli, agreed to contribute but did not specify how much.

India, according to the Prime Minister, is also putting together a Rapid Response Team of doctors and specialists along with testing kits and other equipment. They will be on standby for the benefit of any Saarc country, he said.

All the countries were keen on pooling resources to deal with the economic slowdown resulting from the pandemic, and acknowledged that this was unknown territory that required cooperation at all levels. Afghanistan, in particular, sought India’s help in providing education through satellite to children forced to stay at home because of the shutdown.