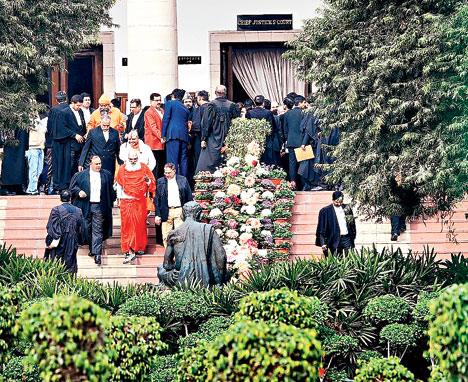 Bhopal/ Lucknow: An executive member of the All India Muslim Personal Law Board (AIMPLB) on Friday suggested an out-of-court settlement of the Ayodhya dispute, triggering calls for his expulsion as a meeting that followed a sumptuous dinner ended in fireworks.

Maulana Salman, an aamilah (executive) and close relative of AIMPLB chief Maulana Rabey Nadvi, had presented a case for a negotiated settlement when the members met in Hyderabad on the first day of the board's three-day deliberations.

The noted cleric had earlier met Art of Living founder Sri Sri Ravi Shankar in Bangalore on Thursday, amid whispers of a behind-the-scenes effort to reach a mutual agreement.

There was also speculation on whether Maulana Salman had the tacit blessings of Maulana Rabey.

On Friday night, Maulana Salman spoke about his deliberations with Ravi Shankar after the members had finished a dinner that included some of the choicest Hyderabadi delicacies.

He had barely summed up when board members Arif Masood, Zafaryab Jeelani, Asaduddin Owaisi, Qasim Rasool Illyas and a number of others launched a vocal attack.

Sources said they reminded Maulana Salman that the AIMPLB had consistently maintained a position that only a court verdict would settle the dispute.

The Telegraph has reliably learnt that several members sought Maulana Salman's expulsion from the executive.

This is ironical as throughout the Atal Bihari Vajpayee government's tenure (1998-2004), the board had itself tried to find a negotiated settlement of the Babri Masjid-Ram Janmabhoomi dispute.

It had even played host to Kanchi Shankaracharya Swami Jayendra Saraswati once at Lucknow to find an "amicable settlement".

Later, another "formula" had envisaged that idols of Lord Ram in the makeshift temple be shifted to the nearby Ram Chabutra, a platform that existed virtually at the doorstep of the erstwhile Babri Masjid.

The formula had the "blessings" of people like Ravi Shankar, Jayendra Saraswati, Abdurrahman Wahid, the late President of Indonesia, the world's largest Muslim nation; and Syed Shihab Thengal, the former chief of the Muslim League in Kerala who is also no more.

A veteran AIMPLB member said there was a huge difference between Vajpayee and Prime Minister Narendra Modi. "I don't know how to say it, but in the current atmosphere, we are not hopeful of an honourable or just deal which was a possibility in the Vajpayee era," he said but asked not to be named. Sensing that things were getting out of hand, board chief Maulana Rabey announced that a "disciplinary panel" was being set up to probe the Maulana Salman "episode".

An angry Maulana Salman said he would not attend AIMPLB deliberations.

Some Muslim organisations and seats of learning - such as the Darul Uloom Deoband and the Jamiat Ulema-e-Hind - have expressed their displeasure over Maulana Salman's "unauthorised" meeting with Ravi Shankar in Bangalore.

Sheikh-ul Hadees Maulana Ahmad Khizar Shah Masoodi, a member of the wakf department of the Darul Uloom, urged the law board to restrain its members from sending "confusing signals".

"We fail to understand the reason behind some of our people meeting the Art of Living founder when the community has already concluded unanimously to wait for the Supreme Court verdict in the case," Masoodi said, speaking in Deoband, Uttar Pradesh.

"The AlMPLB had previously rejected any talk of an out-of-court settlement on this issue. The meeting of its member with Sri Sri bothers all of us."

Maulana Arshad Madani, head of the Jamiat Ulema-e Hind (Arshad faction) and part of the investigating panel, said: "We are confident of victory in the title suit in the Ayodhya case and don't want anybody to make statements on behalf of the community."

AIMPLB member Qasim Rasool Ilyas said the board president would take action against Maulana Salman once the panel submitted its report.