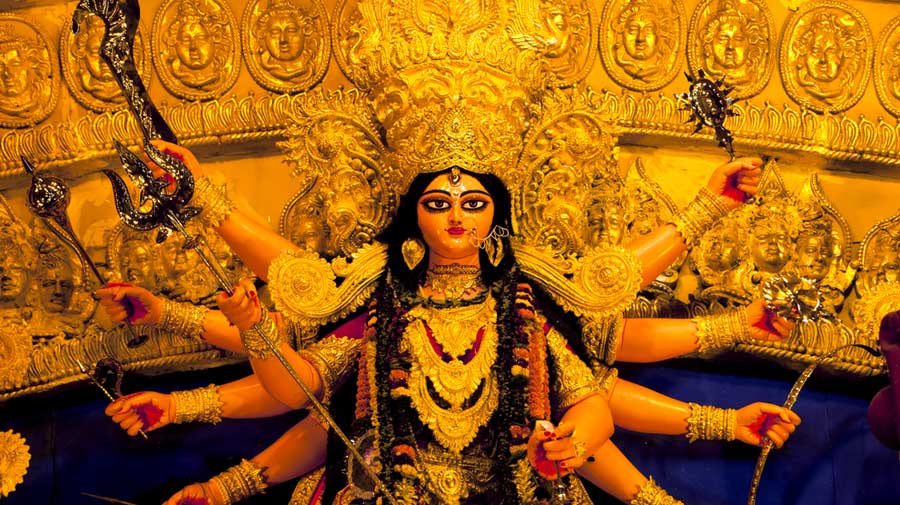 The Orissa High Court has allowed Balu Bazaar Puja Committee, the oldest puja committee of the 1,000-year-old Cuttack city, to organise Durga Puja but without public participation and with strict adherence to Covid-19 guidelines.

The committee has been organising the puja for more than 500 years now. Here the puja was started by one Banerjee family from Bengal who had come to the state along with saint Chaitanya Deb from Bengal in the 15th Century.

Advocate Anirudha Sanganeria, who pleaded the case on behalf of the committee, told The Telegraph, “We had moved a PIL urging the court to allow us to organise the puja. We also cited how the Puri Rath Yatra was held peacefully without the participation of devotees. Considering our plea, the High Court bench headed by chief justice permitted us to hold the puja. However, they have directed us to organise the puja without any public participation.”

Sanganeria said the high court also wanted to know where we will make idols. “When we informed the high court that the idols will be crafted inside the premises of a temple and there will be no congregation of people, the court no more objected to our plea. The immersion of idols will also be held without participation of devotees.”

However, the high court asked the puja committee to follow all the guidelines pertaining to the Covid-19 issued by the state as well as the Centre from time to time.

The Balu Bazaar Puja Committee has a rich history of Durga Puja. President of the Balu Bazar Puja Committee Suryakanta Sanganeria said, “The puja was first organised in 1509 by one Banerjee family which had come along with saint Chaitanya Deb from Nabadwip to Odisha in early 15th Century. During their sojourn here, the Durga Puja time came and the Banerjee family approached the people of Cuttack for their cooperation. People had overwhelmedly supported the move and the idol puja began. Even when famine gripped Odisha in 1865-66, the puja was not stopped. It was not stopped even during the Spanish flu of 1919.”

The silver city Durga Puja is famous for its extravagance and the amount of silver and gold used to decorate the idols. This time Durga Puja is scheduled to be held from October 21. Nearly 169 pandals are erected every year in the city during the Durga Puja.

Cuttack Peace Committee vice-president Nrusingha Charana Choudhury said: “We are aware of the corona pandemic. We have already a round discussion with the Cuttack district administration. They have agreed to allow us to conduct the puja. But the puja will be held without public participation. There will be no distribution of prasad and there will be no decoration.”

Choudhury said, “Following the high court order, another meeting will be held by the state administration to issue fresh guidelines regarding the puja. Whatever guidelines the government will issue, we will follow them in letter and spirit.”

Sources said the administration will insist upon puja committees not making idols higher than five feet.

Police commissioner, (Bhubaneswar-Cuttack) Sudhansu Sarangi said, “There will be no decoration, music and other cultural programmes this year during durga puja.  We will allow only 10 people inside the mandap (pandal) during the puja. If we allow more people, there is a chance of contamination. We will not allow the congregation of people in the Puja mandap. We will issue fresh guidelines after detailed discussion with the various stakeholders including public representatives.”