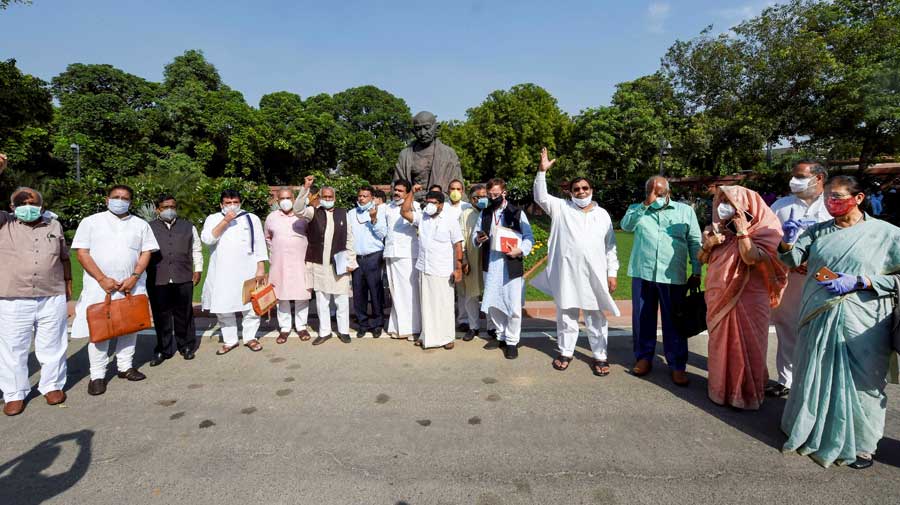 Twelve Opposition parties have taken the rare step of moving a no-confidence motion against Rajya Sabha deputy Chairman Harivansh after the voice vote was used to defeat amendments linked to the farm bills.

The government is said to be planning a counter-strike by moving a motion to suspend the MPs who misbehaved with Harivansh.

The Opposition motion is unlikely to be allowed as under Article 90 of the Constitution, a resolution to remove the deputy Chairman cannot be moved without giving 14 days’ notice.

Emboldened by farmers erupting in protest in multiple states, the Opposition took the unparalleled step of filming their protests in the House and uploading videos on social media. Parliamentary ruckus is traditionally not telecast.

Both sides called it a “black day” for democracy. The government cited the commotion in Parliament while Opposition members pointed to the manner in which the bills were passed without giving them a chance to press for a division (voting by electronic or paper ballot).

Congress MP Abhishek Manu Singhvi questioned the voice vote itself, underlining that there was no audio in the Lok Sabha — where several of the Rajya Sabha members are seated this session owing to physical distancing requirements — and so the question of quorum arises.

The audio link was apparently disrupted after the mic on the chairman’s podium was broken by some Opposition MPs. As is the wont whenever MPs enter the well, Rajya Sabha TV kept the cameras frozen on the Chair once the Opposition moved in to picket the deputy Chairman over the decision to extend proceedings beyond 1pm and till the passage of the farm bills.

“The dictatorial attitude of the Chair in not wanting to get a sense of the House, which is the convention to extend the session beyond the scheduled 1pm, led to bedlam & chaos. The anti-farmer bills were passed in the din without voting. Why the tearing urgency? On whose orders?” tweeted Congress chief whip Jairam Ramesh.

In the din that ensued, the amendments moved by members from different Opposition parties were defeated by voice vote and their demand for a division not taken up, prompting them to move the no-confidence motion against the deputy Chairman.

Later in the evening, the government brought out a pantheon of ministers under the leadership of defence minister Rajnath Singh, the favoured trouble-shooter of late, to defend Harivansh.

In a video message, Trinamul’s Derek O’Brien said: “Today, the right to seek a division was taken away from the Opposition.... It’s like literally taking parliamentary democracy and shoving a knife into it.… You don’t expect the Opposition to sit down and eat lollipops while this happens. So, we protested. Interestingly, the TRS and the BJD, which normally vote with the government, also wanted the bills to go to a Select Committee. So, were the government not sure of their numbers? If they were so sure of the numbers, they could have allowed us to have the vote.”

AAP’s Sanjay Singh tweeted a video showing him standing on the Parliament reporters’ table in front of the Chair and shouting slogans. The video showed Singh being bodily lifted from the table as some Congress and Trinamul MPs tried to stop the marshals.

In the same video, Congress MP Rajeev Satav was seen climbing onto the same table to shout slogans.

“Yes, there are rules that we should not be shooting inside the Rajya Sabha. But we won’t let you get away with it.... You want to suspend me, suspend me. We shot it... there are no rules left. Yes, the Opposition took videos.… You tried to rewrite the rules of Parliament... we took you on today, not for ourselves but for... Indian Parliament, farmers and the Opposition,” O’Brien said.

Briefing journalists after the government’s media conference, Congress leader K.C. Venugopal said: “It is unfortunate that ministers are justifying what the deputy Chairperson did. In a parliamentary democracy, the government has the way — we agree — but the Opposition has its say.”