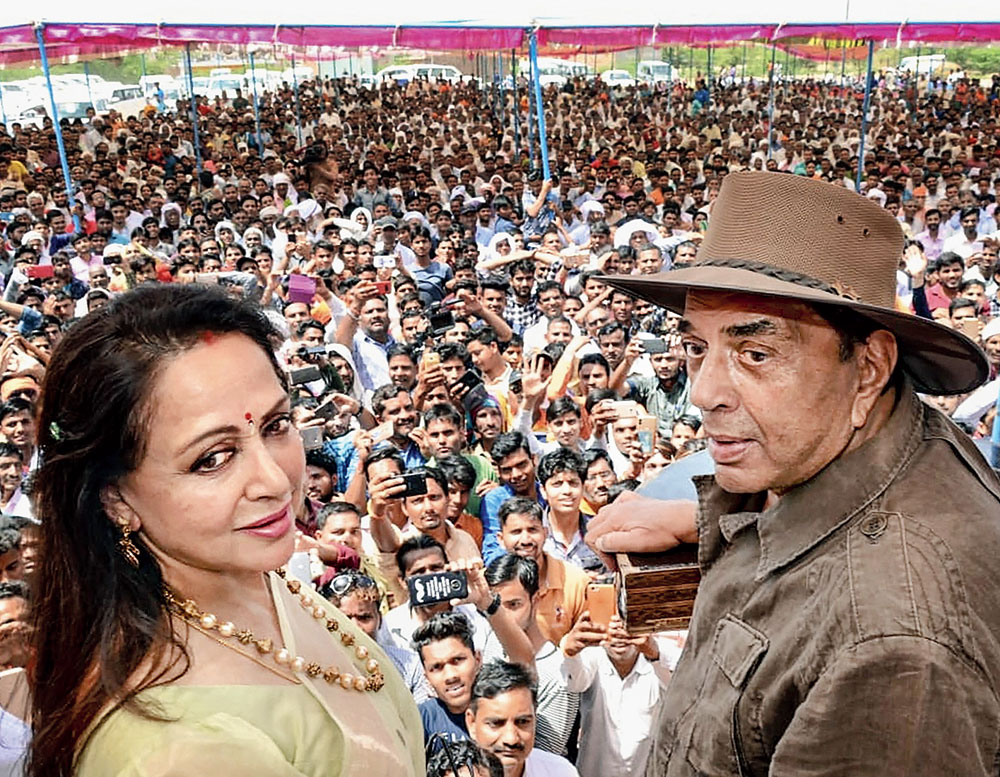 The Bollywood “dream girl” of yesteryear, Hema Malini, last Sunday got her actor husband Dharmendra to seek votes for her. He tried to recreate the magic of his famous dialogue in Sholay, in which she played Basanti and he played Veeru.

“Gaon walon, vote karna. Nahi to kisi aas paas ki tanki pe chadh jaaonga aur wahan mausi ko pukarunga (Villagers, please cast your votes or else I will climb on one of the tanks and shout out for Mausi),” Dharmendra went about saying while campaigning for his wife in Mathura.

Hema Malini’s effort to rush Dharmendra to seek votes for her was seen as a sign of desperation by the BJP candidate, facing simmering anti-incumbency in this temple-town constituency with even pro-BJP voters complaining that she is an “absentee MP”.

“If Hema Malini contests on her own she will lose her deposit. We’ll vote for her only because we want Modiji as Prime Minister again,” said Jagdish Sharma, a shopkeeper in a Mathura market.

Hema spent more time in Mumbai than in Mathura in the last five years, Sharma complained.

Deploying Dharmendra, who didn’t campaign in 2014, was viewed as a last-ditch attempt by the star candidate to woo the dominant Jat voters in the rural pockets. Dharmendra is a Jat from Punjab and to win the support of the community Hema’s campaign managers are going about saying that she is a “Jat bahu” (daughter-in-law).

Hema is up against Rashtriya Lok Dal (RLD) candidate Narendra Singh. Mathura is one of the three seats the RLD has been allotted as part of the BSP-SP-RLD Mahagathbandhan in Uttar Pradesh. Though the RLD candidate is a Thakur, a good portion of the Jat voters are supporting him. Jats, particularly the elders, see the RLD as their party. RLD chief Ajit Singh and his son, Jayant Chaudhary, are campaigning extensively here for their candidate.

“Seventy per cent of the Jats would vote for the RLD. The remaining 30 will support the BJP,” said Hukum Singh, an elderly member of the community in the Jat-dominated Jabra village.

Vijeyndra Singh, a young government primary school teacher, differed. “Most Jats will show their support for the RLD but silently many of them will vote for the BJP,” Vijeyndra said, adding that there was a generation gap among the Jats. “The youths vote for the BJP, the elders stick with the RLD.”

The reason for a good portion of the Jat voters backing Hema Malini despite a lot of complaints against her seemed to be the Modi factor.

“Narendra Modi deserves another chance. We are voting for Modiji and not Hema Malini,” said Sushant Chaduhary, a Jat youth.

Hema had won by a margin of over 3 lakh votes in 2014 from Mathura, beating Jayant Chaudhary, grandson of Jat leader and former Prime Minister Charan Singh. She had bagged more than the combined votes of the RLD, BSP and the SP. This has given hope to the BJP managers that Hema, aided by the Modi magic, would emerge victorious despite the strong anti-incumbency against her.

Hema, however, is not taking any chances and is pulling out all stops, including announcing that this would be her last election. BJP insiders feel it is meant to counter internal sabotage. Mathura MLA Shrikant Sharma, a minister in UP chief minister Yogi Adityanath’s government, was a strong contender for the seat. “By saying that this is her last election, Hema Malini is sending a message to Sharma and other local leaders to not sabotage her chances,” one BJP leader said.

The fear of the Congress candidate, Mahesh Pathak, denting a good portion of the Brahmin votes is also haunting Hema.