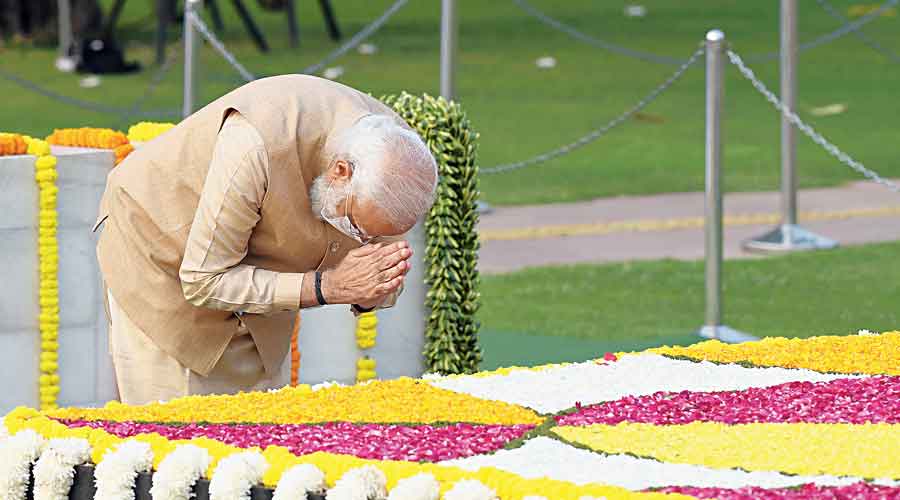 No amount of collective kowtowing before Gandhi statues by some of the most powerful figures in the country could hide the arrow-tipped tail that wiggled and stuck out on social media on the birth anniversary of the Father of the Nation.

#NathuramGodseZindabad was one of the top trends on Twitter for several hours on Saturday, with some of the tweets lauding the assassin of the Mahatma as “hero” and “patriot”.

According to trends24, which tracks top trends on Twitter, #NathuramGodseZindabad in Hindi was trending at No. 4 “with 160K tweets” around 5pm. It had started trending about nine hours earlier, and at one point was second only to #GandhiJayanti.

Some clung to a straw of hope, pointing out that the Godse devotees did not manage to break past #GandhiJayanti. Similar hope was aired in Europe when Neo-Nazis had begun rearing their heads, setting the stage for the eventual emergence of the Far Right as a force to reckon with.

In a country where a candidate who called Godse a patriot was elected to the Lok Sabha, the assassin trending on Gandhi Jayanti need not raise too many eyebrows.

But some did speak out. Congress spokesperson and former journalist Supriya Shrinate found it shocking enough to upload a video message in which she said: “Today the whole world is worshipping Gandhi; powerful countries are paying tribute to him…. And what a great irony it is that in Gandhi’s own country, Godse’s worshippers are engaged in worshipping Godse on social media.”

Shrinate did not pull any punches. “This is the result of the hate that is being irrigated with great care. Who was Nathuram Godse? Nathuram Godse was the first terrorist of Independent India who did not just kill the flesh and bones that made up Gandhi's body, he wanted to kill Mahatma Gandhi’s ideals….”

She also had little doubt on who should be held accountable. “I will say it again, in today’s time, the seeds of hatred that an elected government and its representatives are sowing, and which are irrigated with great care, and the crop reaped, it is the result of this that in Gandhi’s country, on Gandhi Jayanti, when the whole world is standing with head bowed before Gandhi, in Hindustan Nathuram Godse is being celebrated.”

The Congress’s minder for Telangana and Lok Sabha MP Manickam Tagore tweeted: “If ‘Nathuram #Godse Zindabad’ is trending in India, will the pertinent question be asked. Who is responsible? Dear Mr @narendramodi, will you act or with your silence you will support those Sanghis who are doing this?”

If 'Nathuram #Godse Zindabad' is trending in India, will the pertinent question be asked. Who is responsible? Dear Mr @narendramodi will you act or with your silence you will support those Sangi ‘s who are doing this ?

Hardik Patel, working president of the Gujarat Congress, tweeted: “On #GandhiJayanti today, I urge @TwitterIndia and HM @AmitShah ji to take strict action against all those posting in favour of the killers of Gandhi. Any such heinous trends must immediately be banned, accounts blocked & FIR be filed against those tweeting in favour of Godse.”

On #GandhiJayanti today, I urge @TwitterIndia and HM @AmitShah ji to take strict action against all those posting in favor of the killers of Gandhi. Any such henious trends must immediately be banned, accounts blocked & FIR be filed against those tweeting in favor of Godse.

There was no condemnation of the pro-Godse tweets from the authorities although Prime Minister Modi has extolled the Mahatma at various forums in India and abroad, and led the country in officially observing Gandhi’s birth anniversary on Saturday.

BJP parliamentarian Varun Gandhi stood out as an exception. “India has always been a spiritual superpower, but it is the Mahatma who articulated our nation’s spiritual underpinnings through his being & gave us a moral authority that remains our greatest strength even today. Those tweeting ‘Godse zindabad’ are irresponsibly shaming the nation,” he commented.

India has always been a spiritual superpower,but it is the Mahatma who articulated our nation’s spiritual underpinnings through his being & gave us a moral authority that remains our greatest strength even today.Those tweeting ‘Godse zindabad’ are irresponsibly shaming the nation

Elsewhere, the project to airbrush history was soldiering on apace.

A former president of the BJP in Kerala said on Saturday that Gandhi would have been part of the RSS had he been alive.

“There’s no doubt that Gandhiji would have become a swayamsevak had he been alive today,” P.K. Krishnadas, now a BJP national executive committee member from Kerala, told a small gathering at a Gandhi Jayanti event in Kottayam.

He claimed that Narendra Modi had given “a new life to the Gandhian ideals that Jawaharlal Nehru buried”.

Krishnadas had earlier in the day posted a Facebook message where too he claimed that Gandhi would have worked with the RSS had he been alive.

“Gandhi was proud of being a Hindu. Gandhi had declared the Bhagavad Gita as his mother,” he wrote. “From a philosophical perspective, Gandhi was a swayamsevak.”

At the Kottayam event, Krishnadas targeted the Congress and the Nehru-Gandhis.

“There’s no doubt he would have used his walking stick against today’s ‘duplicate’ (fake) Gandhis,” he said.

“Trusting Nehru was a mistake by Gandhiji because their principles did not match. It was Nehru and the Congress that buried the great Gandhian ideals along with Gandhiji’s mortal remains. That was the reason for India’s destruction,” he said.

“But Narendra Modi gave a new life to the Gandhian ideals that Nehru buried, and that is the foundation for the country’s growth now.”

The Congress urged the police to book Krishnadas for insulting Gandhi. “This is tantamount to killing Gandhi again,” party lawmaker and state Youth Congress president Shafi Parambil told The Telegraph.

“These people have always celebrated Godse. They are now trying to appropriate Gandhi the same way they have claimed ownership of Vallabhbhai Patel and Lal Bahadur Shastri.”

Shafi recalled how Hindu Mahasabha national secretary Puja Shakun Pandey had on January 30, 2019, re-enacted Gandhi’s assassination in Aligarh by firing at his effigy and garlanding a statue of Godse. The same year, BJP leader Pragya Thakur hailed Godse as a “deshbhakt” (patriot).

“Godse worshippers have never been so active. They were a restrained lot even during the government of (Atal Bihari) Vajpayee,” Shafi said.

“History is the biggest enemy of the RSS and its allies. They are trying to cover up their lack of role in the freedom struggle by trying to appropriate great figures like Gandhi, Patel and Shastri.”

Shrinate, the Congress spokesperson, ended her message on an optimistic note: “But Nathuram could not kill Gandhi’s soul then, nor will his followers be able to kill him now. Gandhi is in India’s soul, he is the biggest identity of each one of us.”